Here are three stories I have about haircuts and Southern pathos 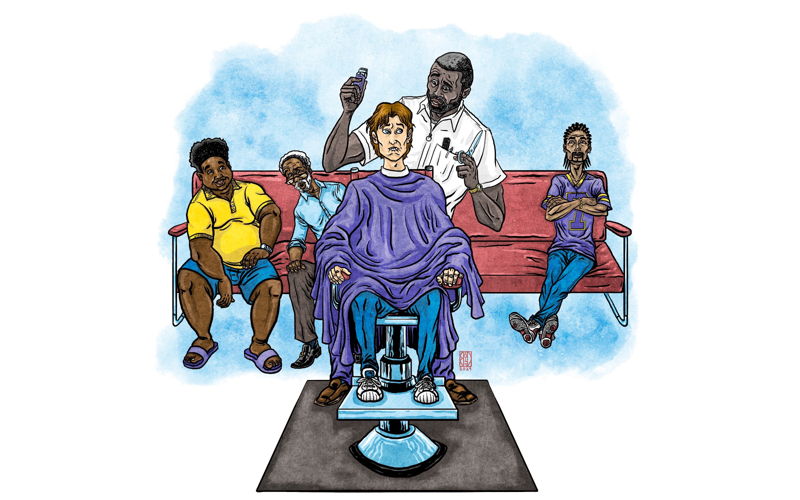 My best story belongs to my mother.

As a child, seeing a full-sized, framed poster of Country music legend Lorrie Morgan in the backseat of the car was a sign that we were going to see her beautician. The poster served as a reference for how my mother wanted her hair styled. That was until she started carrying a copy of Penthouse instead.

Almost daily my mother and I would sit at my grandparents’ kitchen table and look through the stack of catalogues that had arrived in the mail. Notable were the magazines sealed in silver or black plastic. It’d be years before I started hiding a few copies under the washing machine, leading to an awkward encounter with a repairman.

My grandmother never expressed any jealousy over her husband’s reading material. Her side of the bed was held up by Harlequin Romance novels she bought at the flea market. After my grandfather died, his in-laws saved the old Playboys, but burned the Penthouses in the yard.

One day at the kitchen table, my mother was flipping through an issue when a model’s hairstyle caught her eye. While it was definitely more pornographic than the Lorrie Morgan poster she showed her beautician, practicality won out.

That was until my mother returned home upset with magazine in hand. She had presented her stylist with a full-frontal centerfold featuring her ideal haircut. My mother’s head had been nearly shaved. Her words: I think she was looking at the wrong end.

Like my mother, I was a patron of the great Southern institution that is the in-home beauty parlor. My grandmother would take me to see Mrs. Kathy for a haircut and likely a bit of gossip. Leading from the driveway, Kathy’s home opened up into her small salon. Sat stiffly in a barber’s chair, I’d see her husband return home from work, her mother drop off the kids, the day-to-day life they lived in between working hours. There is a certain level of intimacy involved in opening your home to customers — centering your life in one place and letting strangers into your personal spaces. And then they ask you to make them into an idealized version of themselves. Something they saw in a music video or dogeared in a magazine.

Kathy’s oldest child, Jessica, and I shared a birthday. This meant that at least once a year, Jessica would lead me back to her room to show off her new presents, and I’d bring a few of mine. As children, family is a concept too big to comprehend, nevermind tell if yours is happy. Your parents are two hands on a clock — sweeping you forward, always counting down to something.

On May 8, 1996, Kathy’s husband, Clint, beat down their bedroom door and shot his wife seven times. He then walked toward the beauty parlor and shot himself in the chest with a 12-gauge.

Leading up to the murder, deputies had responded to disturbance calls at the home. Kathy was arrested for obstruction of a police officer and aggravated assault, but the case never went to trial.

The morning Kathy was killed, Clint was upset that his wife had struck their 8-year-old daughter during an argument over what she was going to wear to school. He called his mother-in-law, Lena, to come get Jessica and her brother — a routine request when the couple was fighting. Clint later testified that his wife’s working from home was a source of tension in the marriage. The space where I knew her, that she called home and work, had closed in on her. On the day he killed his wife, Clint went to his construction job, but the work site was shut down due to safety violations. He returned home.

Around 10 a.m. Kathy’s mother received a call from Clint saying, “I shot your daughter.” She didn’t believe him, even taking the time to remove her curlers.

Lena arrived at her daughter’s home to find Clint wounded but still conscious by the entrance to the beauty parlor. Inside she found her daughter dead. Police reached the scene to discover Clint resting in a kiddy pool in the yard. In the kitchen was a note that he had written for his wife, a plea for her to seek treatment, to see a doctor for her unrelenting sadness instead of a lawyer.

Clint was found guilty of murder and sentenced to life in prison. His daughter, Jessica, died in 2016, overdosing on heroin inside a pickup truck.

Until now I have never considered that I was a stranger in Mrs. Kathy’s home. It was just the place I went to have my hair cut. Yet it’s an easy way to stumble into another person’s privacy.

By the time I moved to South Carolina for college, I had been cutting my own hair for years. Always for the worst. One day, I decided to seek the help of a professional. I was attending a small liberal arts college in Upstate South Carolina. I won’t speculate on how diverse the school was racially, but if you were black, your face was in the brochure.

Emboldened by something I can’t remember, I walked to the local barbershop I had passed dozens of times before. Opening the shop door, I was met with the surprised faces of several older black men caught mid-conversation, mid-joke, mid-something. Mid-not knowing why this white boy was here. I was frozen in the doorway of a black barbershop. The social contract didn’t cover this particular situation. For any of us.

“It’s been a while since I cut white hair,” the barber warned me. I didn’t know to leave.

Our school wasn’t so much a part of the community. All the buildings on campus faced inward. I had walked past a monument to Confederate soldiers on my way to this barbershop. Now, for maybe the first time in my life as a young white man, I had found myself in a place that is not for me.

I sat in that barber’s chair as the room guarded their conversations and a man tried his best to not ruin my hair. It’s not that I wasn’t welcomed. This place just didn’t exist for me. I saw then that not everything has to be for me.

And, like my mother’s, that’s the story of the worst haircut I ever got.

When he’s not daydreaming of global peace, ending world hunger, or fighting crime as a caped crusader, Baird Hoffmire is an illustrator, animator, graphic designer, and exhibiting artist.