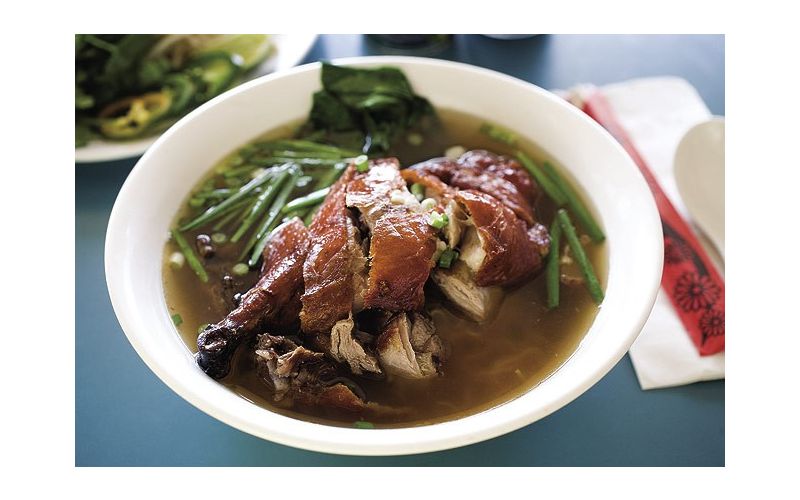 H&L Asian Market is a fascinating place. Located on Rivers Avenue in North Charleston, it looks a lot like your typical suburban grocery story — and, in fact, it once was one — but everything now is just slightly different.

The linoleum floors are aged and worn. Some of the lights are out in the reach-in coolers. The pink walls with the fruit border trim are relics from an earlier decade, but within this faded setting is a florid rainbow of foods from around the world: entire aisles of colorful cellophane-wrapped boxes of noodles, cookies, and candies; case after case of bottled sauces; and a produce section stocked with huge bunches of Thai basil and exotic fruits like durians. Along the back wall, there’s a meat department where you can find chicken with the feet still on, and the fully-stocked seafood counter has tanks of live fish that will be dispatched and cleaned while you wait. An adventurous eater can easily spend an hour or more strolling up and down the aisles, exploring novelties from far, far away.

The products at H&L Asian Market span a wide arc of countries — China, Japan, Korea, Vietnam, Thailand, the Philippines — and there’s a generous selection of Latino products on the shelves, too. They even bring a twist to the old supermarket deli. It’s up in the front corner, where once you would’ve found bins of fried chicken and tubs of potato salad and coleslaw, and it’s called Pho No. 1 Restaurant.

The drink cooler still carries the requisite Coca-Cola products, but there’s Nuoc Dua (coconut juice) and Nuoc Thach (grass jelly drink), too. The old booths, with seats made from a single curving sheet of wood laminate in 1980s pink and pale blue pastels, are still affixed to the wall along the big plate-glass windows at the front of the store. They’re joined now by two large round tables with red cloth-covered chairs, the type you’d find in a typical China Palace restaurant. And there’s a stout bottle of sriracha on each table.

Pho No. 1’s menu consists of various permutations of a fixed set of ingredients. Rice noodles, egg noodles, steamed or fried rice, and crispy pancakes serve as the base. Roasted pork, chicken, beef, shrimp, and duck are your proteins. And onions, bean sprouts, and lettuce are the veggies. These are mixed together in a long list of numbered combinations that let you customize to your heart’s content.

The Bun Thit Heo ($7.99) — or, as I like to call it, “B4” — pairs tender rice vermicelli and thin sliced roasted pork. The pork has a little crispy char from the wok with bits of toasted peanut sprinkled atop. The salad of bean sprouts, lettuce, and Thai basil on the side seems a little plain at first, but the crisp, cool texture and the aromatic basil will grow on you. Plus, the cups of thin, tangy, and very spicy sauce add a great kick, making for a very large and quite satisfying meal.

And then, of course, there’s the pho. It’s the national soup of Vietnam, a clear beef broth filled with a mysterious blend of sweet and savory spices and tangles of marble-white rice noodles into which you toss bean sprouts, cilantro, onions, and lime juice to taste. You can order a bowl with rare beef, sliced well-done brisket, or beef meatballs (each $7.99) or go all the way and get the pho dac biet No. 1 ($8.99), which combines all three meats and adds flank tendon and tripe for good measure. The flank tendon was noticeably absent from the bowl I was served (perhaps they had run out?), but there was tripe aplenty, and I would recommend it even to the faint of heart. The tripe is almost all texture, not flavor, adding a firm, chewy bite that mixes nicely with the rest of the bowl.

I have to say that, as pho goes, H&L’s is not the best in town — and that statement alone is a testament to how much Charleston’s culinary breadth has expanded in recent years. The flavors are a bit muted and mild compared to the sparkling versions available elsewhere, but it is still an excellent, hearty soup worth trying. As supermarket deli fare goes, it’s a splendid alternative to the pre-made chicken you might pick up at your local Bi-Lo (though you can find a whole roasted duck here for $17.99). On the streets of Hanoi, pho is a popular breakfast food, and I would heartily recommend reheating it on a cool morning for a warm, filling breakfast that will keep you full and satisfied until a very late lunch.

My favorite thing from the H&L deli, though, are the goi cuon, or Vietnamese spring rolls ($3.85). These are not the fried variety you find at Chinese restaurants but rather a cool, light roll of steamed shrimp, sliced roasted pork, rice noodles, and lettuce wrapped tightly in rice paper and served at room temperature. You bite through the delightfully taut wrapper and get a big hit of cilantro flavor. The cool peanut-ginger dipping sauce makes it even better. Served two to an order, the rolls are perfect as a quick snack to tide you over as you drive home with a big takeout order — in fact, they might not even make it out of the parking lot.

As befits a supermarket restaurant, the food at Pho No. 1 is well suited for takeout, and they’ll box everything up in white styrofoam containers and secure them tightly in big plastic bags. A few wrinkles to note: the restaurant is open every day but Tuesday, and they take cash only, though there is an ATM in the market.

So, if you like a little adventurous eating, stop off at the H&L the next time you’re heading up Rivers Avenue and give the pho and the goi cuon a shot. And try to get there soon. In a few more years, I predict, such fare will be no more exotic to local tastebuds than tacos or pizza.