Halloween Roundup 2018: 75+ excuses to put on a costume in Charleston this year 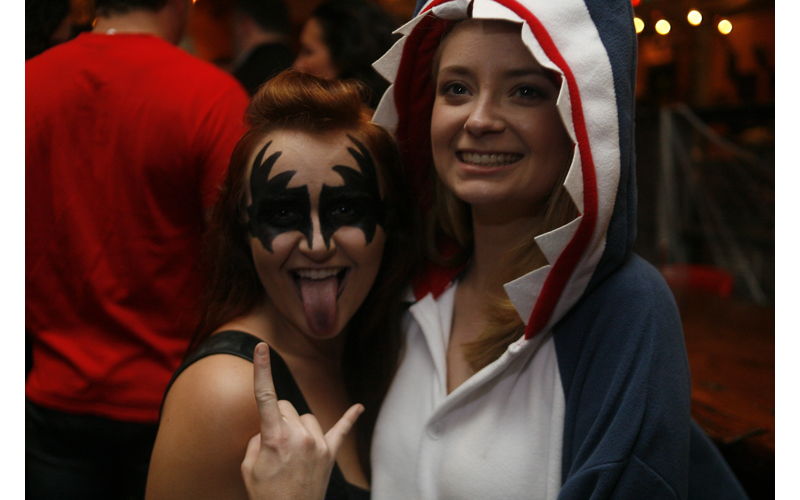 Whether you want to down shots, dance your face off, (or for that matter, scream your face off), or take the kids trick-or-treating, we’ve got an event for you. Happy Halloween, Charleston.

Dress Up, Get Down

Head to Fam’s Brewing Co. for The Evil Dead trivia and the release of the Pumpkin Scream Beer, starting at 8 p.m.

Head to Elliotborough Mini Bar for a night of ghost stories from 7-10 p.m.

Dudley’s on Ann hosts a party with the Patti O’Furniture show, featuring a costume contest and starting at 11 p.m.

Mt. Pleasant’s Charleston Sports Pub hosts a costume contest — the theme is to dress like what scares you, be it zombies, ghosts, our current president, you get the idea — drink specials, and a DJ spinning spooky hits. It all kicks off at 9 p.m. If you’re in West Ashley, that Charleston Sports Pub location presents Zombie prom from 9 p.m.-1 a.m.

Burns Alley and Warehouse both team up with Bar Crawls for ‘Charleston: Witching Hour,’ a happy hour with scares and screams from 5-10 p.m.

Both Mex 1 locations hosts a Day of the Dead party from 5 p.m.-1 a.m. Each features live music, drink specials, and face painting. See all the deets online.

Join Cutty’s for the second annual Halloween dance party as the bar is turned into the 80s-inspired goth haven of your wildest, spookiest dreams. Cover is $5 and party starts at 10 p.m.

Deco is getting down all weekend, starting with a breast cancer awareness fundraiser, Beats with Boobs, on Friday starting at 10 p.m. and followed by Decoween on Saturday (the self-described biggest costume contest in town).

Low Tide kicks off the party at 7 p.m. with a costume contest. Food will be available for purchase from Chicken Fats.

Saltwater Cycle, your floating pedal party, brings the boos and you bring the booze, for three days of booze cruise fun (Saturday, Sunday, and Halloween at various times).

Red’s hosts a Halloween Carn-Evil from 9 p.m.-midnight with live music from Tidal Jive, drink specials, and a costume contest.

Head to King Street Dispensary starting at 5 p.m. for a throwback to the ’90s party — Space Jam, Clueless, Dumb & Dumber all come to mind if you need a costume idea.

Party with DJ Kevbo at Mynt and enjoy a costume contest at midnight.

Vickery’s is hosting a legendary halloween party on the dock. Drink specials and a costume contest is open to all those who come. A custom Deep Eddy acoustic guitar, Shock Top and Jameson swag, and cash prizes will be on the table for the winners.

Head to Tommy Condon’s for their annual Halloween party featuring a costume contest (with prizes, duh), music from Christian Carroll, and specials starting at 5 p.m.

Tabbuli hosts a Spooktacular Soiree with entertainment, drink specials, and a costume contest.

Dogs and humans can compete for best costume at Saltwater Cowboys, 6-9 p.m.

Carolina Ale House hosts a Silent Dance of the Dead Halloween Party at 10 p.m. (Yes, this is a silent disco with free headset rentals).

Snafu Brewing releases their SnafBoo Stout in true Halloween fashion, with a pumpkin smashing, Halloween movies on the projector screen, and a costume contest.

Exquis event center hosts the ‘biggest Halloween bash ever‘ with a $1,000 costume contest and music from DJ Kub and DJ Loui Vee.

There are no tricks, just treats at the Cocktail Club, from 9 p.m.-2 a.m., with half off punch bowls (liquor provided by Virgil Kaine), bottles of wine, and bottles of champagne. Expect the staff to be dressed up for full Halloween effect, Halloween decorations on every surface, and live music from One Kool Blow.

Woody’s Pizza hosts a Halloween party from 8:30 p.m.-2 a.m. with music from DJ DiZ, an ice luge, and a costume contest.

It’s a Nightmare on Ann Street when you party at The Brick with DJ Elementz, a costume contest, and drink specials starting at 9 p.m.

From Sat. Oct. 27-Sat. Nov. 3 children and their families are invited to exchange their Halloween candy for toys at Kool Smiles North Charleston. All donated candy will be sent in care packages to U.S. service members stationed overseas, area veterans, and first responders via Operation Gratitude.

Hampton Park hosts Trick or Treat in the Park from 4-6 p.m.

Head to Trunk or Treat, Movie in the Park, and costume contest held in the Hanahan Amphitheater starting at 6 p.m. Guests will enjoy a showing of Hotel Transylvania 2.

Trick-or-treat at Citadel mall until the candy is gone. There will also be a jump castle, face painting, and so much more. Costumes required, no masks. Candy gathering starts at 6 p.m.

Fright Nights ain’t over ’til it’s over. Enjoy the screaming good time this Thursday through Oct. 31.

Watch Hocus Pocus on the jumbotron at MUSC Health Stadium with food trucks, a full bar (bless), and jump castles.

Glow and flow at Charleston Community Yoga with a black light party at 6 p.m.

Ain’t no weekend like a Rocky Horror Weekend, held at Terrace Theater this Friday and Saturday starting at 11:30 p.m.

Workshop’s Boo Fest, held from 12-3 p.m., is an opportunity to not only trick out your kid’s halloween costume, but also your schnauzer’s, as there will be a pup costume contest in the courtyard. Workshop kitchens will also be around offering $4 kids meals, and yes, candy WILL be handed out.

Scary Saturday? It’s going down at Rhapsody at 9 a.m. Head to Rhapsody CrossFit for a workout and tunes from DJ Trevor D.

Want your own colonial style portrait made? Join the Powder Magazine on Saturday, October 27 where you can have your picture taken in colonial clothing and create a digital portrait. You may either come dressed in your own kit, or you can be outfitted yourself.

The Barrel’s Halloween festivities include fun for those of us with two legs — and our four-legged friends. The winner of the pet costume contest receives a $50 gift card to the Barrel. Enjoy live music from the Holy City Heaters and snag pizza for sale from First Name Basis.

The Main Library hosts Legends and Ghost stories from the south from 6-7 p.m.

With over 100 years of professional singing between them, the Charlestones a capella quartet is uniquely qualified to bring Charlestonians this musical event. All are welcome to attend this family-friendly show, featuring classics such as Thriller and Monster Mash.

On Halloween from 4:30 p.m. – 5:30 p.m., visitors of the King Charles Inn and Brew Pub & Café can enjoy special Raven cocktails for only $5, listen to Edgar Allan Poe reciting some of his most famous works, shop the Goldbug Series jewelry pop-up shop, and indulge in complimentary finger food at the aptly named An Evening with Edgar Allan Poe.