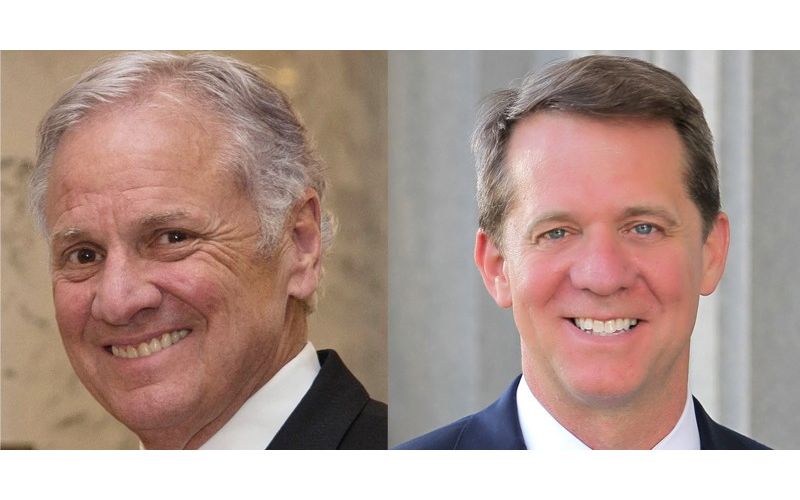 Who do you want to see during the next hurricane?

McMaster, a Trump-endorsed Republican, is running to be elected governor for the first time after replacing Nikki Haley in the position last year. His opponent is Dem S.C. Rep. James Smith of Columbia. Smith lists his top priorities as ensuring access to quality education, which he calls “fundamental to economic development,” increasing wages, improving vocational training, and accepting $2 billion in federal funds to provide low-income health care through Medicaid expansion. On his website, Gov. McMaster pledges to cut taxes (in support of the Trump tax plan), oppose sanctuary cities, and encourage access to health care — not through federal funds, but by “encouraging healthier behaviors.” In a call with CP, he touted a bill giving nurses more authority as a way to expand health care options. He said S.C. could not afford to expand Medicaid, which could lead to higher taxes or cuts to infrastructure or law enforcement. Rattling off Obamacare alternatives, McMaster says, “The better way is to have drug stores with minute clinics,” telemedicine, and “free enterprise” options. On LGBTQ rights, McMaster claimed “everyone is protected under current law.” (S.C. has no LGBTQ protection laws.) “I’m not in favor of new regulations and laws.”

State Rep. James Smith is not the most exciting candidate we could ask for. Frankly, we’ve been pretty underwhelmed with his campaign, which has mostly flown under the radar despite the fact that Henry McMaster has never been elected to the job he looks poised to hold onto on Nov. 6. Smith may be on the right side of issues from health care to education to the environment, but except for a few times when he stood on the debate stage with a few canned zingers and wagged his finger at McMaster, you wouldn’t know it. But we can’t back McMaster, who has been a cheerleader for President Donald Trump since he was the first statewide elected official to endorse the reality TV star when he was still a protest candidate for angry Republicans. McMaster has responsibly helped the state prepare for possible natural disasters, a basic requirement of the job, but has turned away any attempt to make government run efficiently or effectively, even vetoing the long-overdue gas tax increase solely out of principle. Voters should once again opt against electing Henry McMaster as governor and cast their votes for James Smith and Mandy Powers Norrell.

Republican Alan Wilson succeeded Gov. Henry McMaster as AG in 2011, and he’s been on the job ever since. In October, The Post & Courier reported that Wilson impeded an ongoing corruption probe targeting consultant Richard Quinn and Associates, a high-powered consulting firm whose clients included Gov. Henry McMaster and himself. Last week, Rep. Jim Harrison became the first state lawmaker to get prison time (18 months) as a result of the investigation. “The first thing I will do is bring ethics and transparency to the office,” said Constance Anastopoulo, a Democrat challenging Wilson, in an interview with CP. Beyond that, she intends on holding SCANA accountable for their $9 billion taxpayer-funded nuclear debacle and to “prosecute where we find criminal activity.” She denounces Wilson’s inaction on seeking an exemption to offshore drilling in South Carolina, an option that the Trump administration opened up earlier this year. On his website, Wilson boasts about helping to “lead the 26-state challenge to the federal health care mandate” and about defending the constitution on issues of “religious freedom” and “EPA overreach.”

In a terrifically ironic turn of fate, we’re excited to endorse an attorney who specializes in legal ethics against incumbent Attorney General Alan Wilson. Constance Anastopoulo is the only candidate in the race who has not had to recuse herself over conflicts of interest in the state’s long-running political corruption dragnet.

Since the office’s current incumbent, Secretary Mark Hammond, was last elected, his office has actually made the news, which isn’t really a good thing.

For the most part, if the S.C. Secretary of State is doing his or her job, you will never hear about it. Responsible for handling business filings, regulating charities, filing away new laws, and a few other arcane duties, it’s not exactly hero’s work. Save for the annual release of its “Angels and Scrooges” list of good and bad charities, there’s just not much good news to be made as a paper pusher.

Last year, Hammond found himself embroiled in scandal as his primary opponent revealed that his office had failed to affix the official state seal on dozens of laws ratified over the last 15 years. He says he’s since remedied the oversight and defends it as a non-issue that the attorney general said would not have jeopardized the legitimacy of the laws.

Aside from that splash, Hammond points to new services his office has put online in recent years as a reason why voters should re-elect him on Nov. 6. Additional updates, Hammond says, are on the way as well, including an intriguing initiative to allow electronic notarization of documents, eliminating the task of hunting down a notary when you need one.

Democrat Melvin Whittenburg is challenging Hammond this time around with an agenda aimed at using the SoS office to aid specific communities, from veterans to minorities. Retired from careers with the Army and Exxon Mobil, Whittenburg’s top-line policy proposals prominently push collaboration and outreach between the office and the public.

Public servants deserve a chance to help make their policy visions a reality, but re-election is not automatic. And after 15 years in office, it’s time for a change in the Secretary of State’s office. We’re eager to see some creative efforts to help make the office more engaging and public-facing. But we can’t support Hammond’s re-election and find Whittenburg’s well-meaning platform too vague.

Treasurer Curtis Loftis has taken a bit of a beating in the past year or so. Last year, S.C. lawmakers tweaked one of his main duties, managing part of the state’s massive pension system, after it was found that he influenced the hiring of a friend, a move which netted that friend $2 million in attorney’s fees. But if you ask Loftis’ opponents, his ethics troubles may have just provided cover for politicians to get someone they don’t get along with out of the picture.

Democratic challenger Rosalyn Glenn, a Columbia financial advisor in her first run for political office, originally got into the race with an eye on helping shore up the state pension fund just as she would with her individual clients. It wasn’t until after she got into the race that she found out that the office’s duties had changed. In a state with eight elected constitutional officers, all of whom are white and seven of whom are men, Glenn is the only African-American woman running for statewide office this year.

Accountant Sarah Work of York is also challenging Loftis as an independent running under the American Party banner. Work says she initially waded into politics after growing tired of having little or no options to choose from by the time the general election rolled around. From her point of view, Work sees the race as a contest between herself and Glenn, with Loftis seemingly unwelcome among his GOP colleagues. Work hopes to return some professionalism to the office and takes issue with Loftis’ use of Future Scholar commercials to put his folksy face on televisions across the state.

State Agriculture Commissioner Hugh Weathers is facing a challenge from two third party candidates this year. Frankly, we could not find much information about United Citizens Party candidate Chris Nelums.

David Edmond, who is running under the Green Party umbrella, previously faced Weathers in 2014, earning 11 percent of the vote as one of two non-major party challengers that year. Edmond names increasing healthy food availability, next-gen farmer advocacy, and increasing farmers markets statewide as his three plank campaign platform. Asked for specific things he’d do differently than the incumbent, Edmond cites the controversy over the relocation of the state farmers market from Richland to Lexington County where it opened in 2013.

Weathers continues to work behind the scenes as an advocate for the state’s farmers as he runs for his fourth term. In recent years, his office has administered the state’s new industrial hemp farming pilot program, which just issued its second round of 20 permits to enterprising farmers looking to experiment in the cultivation of what could become a cash crop for S.C. This year, the Department of Agriculture kickstarted a new initiative to help new farmers bring their products to market, the Agribusiness Center for Research and Entrepreneurship (ACRE).

The agriculture industry, “agribusiness,” as the Department of Agriculture calls it, has seen 23 percent growth over the past 10 years and could soon have a $50 billion economic impact in South Carolina, making it one of the economic powerhouses for our state. Weathers will continue capable leadership if re-elected.