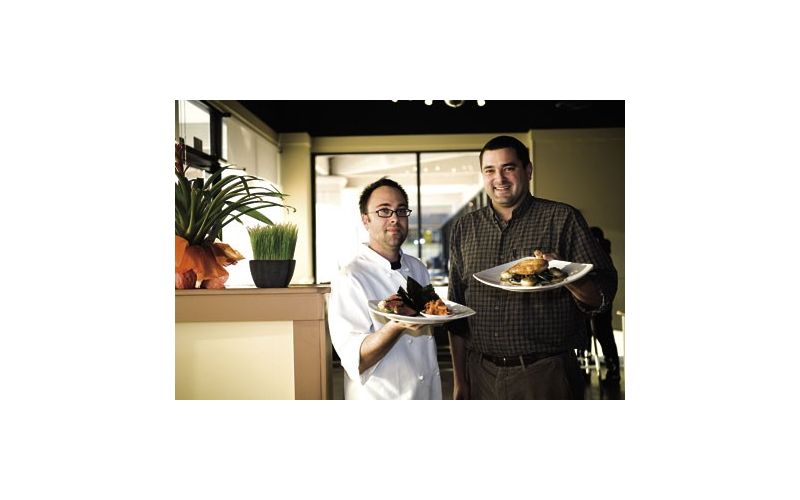 The G on the Graze sign is green, setting it off from the other white letters, and a few planters with decorative grasses are placed strategically around the interior. While that motif may suggest a vegetarian restaurant, it’s actually more of an upscale bistro with a definite farm-to-table aesthetic, and it’s a welcome new face in an area that has long needed a culinary boost.

Graze opened back in September in the old Coco’s Café location in Mt. Pleasant’s Patriots Plaza. I, for one, will admit to a lingering fondness for Coco’s cramped, dark interior and its very European we’ll-cram-you-in-right-next-to-your-neighbors approach. Graze has totally overhauled the space. The top half of the wall that once divided the bar from the main dining area is gone, which really opens up the room. The tables are more widely spaced, and with a fresh beige and pastel green color scheme, the whole place feels much more contemporary and light.

Dubbing its offering “creative casual cuisine,” Graze’s menu is a sampling of global styles, from Japanese and Korean to Cuban and Mediterranean. The owners promise to change the selections along with the seasons, and the current autumn version blends a lot of fresh fish and seafood with slow-braised meats and hearty stews appropriate for cooler weather.

The spicy tuna tataki ($10) is a surprisingly interesting appetizer. The tuna is coated in sesame seeds, slightly seared on the outside, and sliced into thin, deep magenta squares. What makes the plate are the accompaniments: a dark orange smear of bean paste gives a spicy foundation, while the pickled ginger mayo offers a cooling counterargument. Tangy, thin-sliced marinated cucumbers are fanned over the top of the tuna slices, and a small pile of wonton skins, chopped into squares and fried crisp, sits off to the side. Even the sprinkling of bright orange tobiko (flying fish roe) adds a little something extra, a sweet and salty bite. It’s both an attractive presentation and a very pleasing combination of textures and flavors.

The fried oysters ($10) are nicely done too, with a light crispy cornmeal batter enrobing oysters that are still soft and briny inside. Like the tuna tataki, the appetizer shows a creative stretch, though in this case I’m not sure it works. The oysters are placed over a bed of arugula tossed with thin, angular-sliced celery and a lemon vinaigrette. The tangy vinaigrette and cool celery blend nicely with the spiciness of the arugula, and crumbles of blue cheese add bold sparks. They’re good fried oysters with a good salad, but they don’t really go together and seem like they should be on separate plates, especially since the pale orange tomato aioli — a fine sauce for the crispy oysters — is simply spread in an oblong pool around the side of the greens as sort of an awkward afterthought. And, unfortunately, I hit bits of tooth-rattling shell in not one but two oysters, which sort of put a damper on things.

The combinations not only catch your eye on the menu but really work on the plate, too. A six-inch slab of wreckfish ($18), seared till golden and crispy around the edges, is served over a beguiling bed of roasted vegetables, including cubes of chewy parsnips, discs of fingerling potato, crisp green beans, and tangy cipollini onions, all punctuated with thick lardons of smoky bacon. The preserved lemon buerre blanc that lies under it all is delightfully buttery and, fortunately, added with a moderate hand, for too much of that rich sauce would overwhelm the plate. Wreckfish, one of the specialties of our local waters, is a notoriously troublesome fish to cook properly, becoming hard and rubbery if overdone. But the Graze kitchen pulls it off nicely, and the thick fish is firm and chewy but not at all rubbery. It’s a surprisingly large and filling dish, and one that can really anchor a menu.

The kimchi and pork stew ($16) is splendid, too. The slow-braised pork is perfectly tender, and it’s nestled in a reddish orange broth that’s rich and slightly spicy and filled with bits of chopped kimchee (made in-house) and cellophane noodles. Sliced green scallions provide big bursts of flavor, and the spicy pork broth — speckled with tiny orange droplets of oil — is delicious. The only stumble is the handful of bean sprouts strewn over the top of the stew, which add some color and texture to the bowl but seem starkly raw and not melded in. Nevertheless, if you brush those sprouts aside, it’s a filling and satisfying dish, and not something you see on menus around town.

At lunch, Graze offers a menu that’s similar to the dinner one, with the same “Tiny Grazing” (appetizer), soups and salads, plus a slimmed-down selection of entrées and “craft” sandwiches like a roasted leg of lamb gyro ($14) and Cuban-style pork shoulder on brioche ($9).

Graze is the creation of co-owners Bradford Bobbit, Micahel Karkut, and Derek Lathan, all veterans of Mt. Pleasant’s Sette restaurant. From the creative menu to the physical details of the restaurant, it looks like they put in the time to do it the right way. The interior, the work of designer Erika Nadolny of Tabula Rasa, is fresh and bright, featuring textured beige wallpaper, retro lighting fixtures, and brown-framed photographs of nature scenes and bridges. In the bar area, the big quartz bar is attractive, and green pastels and dark gray highlights (which are really just painted boards of various sizes affixed to the wall) make for a calm, inviting room.

Graze is the first Mt. Pleasant restaurant opening in quite a while that has pleasantly surprised me. We’ve seen too many upscale sushi joints and bistro-style places recently that aim for the higher end of the market but stumble over the food — ham-handed portions and seasoning, a lack of subtlety and finesse, and, frankly, a general dearth of anything interesting on the menu. Graze avoids those pitfalls, offering a new neighborhood restaurant with a future that one can get excited about.

Graft Wine Shop co-owners Miles White and Femi Oyediran opened the doors to the King Street retail store and bar over the weekend for the first time since the onset of the pandemic. Initial opening hours for bar service will be Thursday through Sunday from 5-10 p.m. “We just wanted to wait until we felt […]