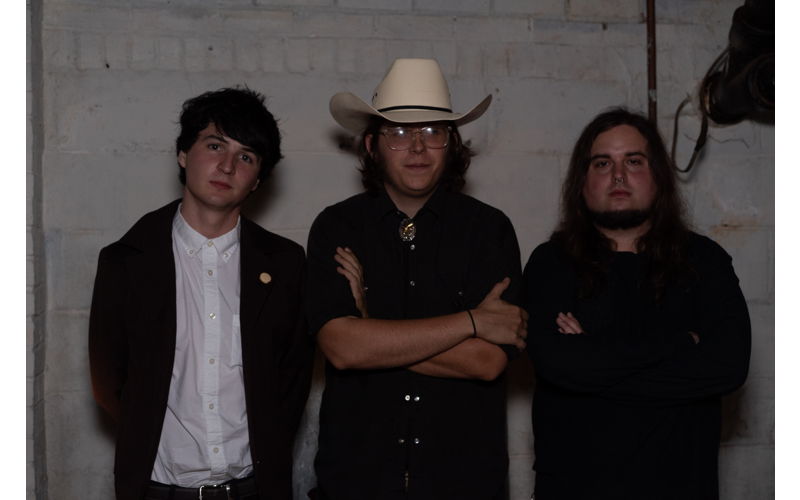 Putting the Pieces Together

Greenville trio Gláss has been a fantastic mystery over the last few years, at least in Charleston. The band would come through town every once in a while and play a venue like The Royal American, folks would rave about how good the heavy, echoing art-punk sound was, but then things would just go silent. No new releases came after its 2016 album Accent, and it just continued to be an elusive South Carolina rock band, whether intended to or not. Now with the release of a new album Wilting in Mauve on Sept. 11, there’s no longer any shadow over Gláss.

The band formed around 2014 and has remained a trio over its six years with lead singer and guitarist Aaron Burke and drummer Sam Goldsmith being the two constant members. Alex Angell currently plays bass in the group, though that position has changed hands a few times over the band’s timeline.

If you’ve seen Gláss live at any point in the past few years, then you have heard some of the songs that make up Wilting in Mauve. “It was a really slow process,” Burke said. “My now-fiance and I lived in Athens and the other members were still in Greenville when the first album came out … The only times we were physically working together were really when we were playing shows because we all lived in two separate towns. We wanted a blank slate and even though we loved those songs we just never wanted to play them again.”

According to Burke, the band went into a two-year hiatus during a creative dry spell before he moved back to Greenville.

Burke cites the return to upstate South Carolina as a kickstarter for reviving the energy that sparked Accent and Foreign Bastard. The hiatus between releases wasn’t a planned thing for Gláss, and folks who saw or heard the band around the time of Accent will likely remember it as a stern trio that emultated British post-punk. It comes somewhat naturally as Burke grew up in Ireland with a constant feed of British music that he carried with him when he moved to South Carolina at the age of 16. But post-punk is a label that tends to stick to a group, even though it doesn’t always agree with it.

“People take genre labels very seriously. Like on Facebook we said that Accent was a post-punk record, which it was, but that stuck and now I resent that term,” Burke said. The band makes it clear that it can do plenty of other styles on Wilting in Mauve. Gláss was originally going to be a very heavy doom metal-oriented band that focused on repetition.

There are elements of bleak shoegaze, chopping rhythmic guitar, unhinged progressive rock, bits of Nick Cave gravitas and trimmings of free jazz scattered with saxophone parts on the album. All of that comes through in just the first two songs, “Heavy Fields” and “A Tangled East.” It maintains a remarkable ability to keep the listener guessing while still holding onto a concise sound and identity to the entire project. “Garters” is a heavy shotgun burst of sleek punk which then dives into the dimly lit shoegazing corner of “Boughs.” You can’t call Wilting in Mauve, or Gláss for that matter, one thing because it is much more than one record store section. It’s a beautiful cyclone of an album, spinning in unison, though you can still make out the details it picked up along its way.

“A Tangled East,” which is almost entirely instrumental, sees the band reference the vocal refrain from John Coltrane’s A Love Supreme.

“Instead of ‘a love supreme’, we say ‘amor fati’, which means ‘love of fate.’ That’s an idea that kind of resonates throughout the album. Musically I wanted that song to sound like On the Corner by Miles Davis. That’s such a nasty, sexy record, I wanted to contrast that with A Love Supreme.” While your own connection to hearing Wilting in Mauve is your own, it is worth considering that concept of “amor fati” when you give this record a listen.

“I do want people to really listen to it,” Burke said. “There’s no propaganda, it’s not for any one crowd. Though I want it to be seen as a South Carolina album, that’s important to me.”