Give into temptation with these seven meaty sandwiches in Charleston 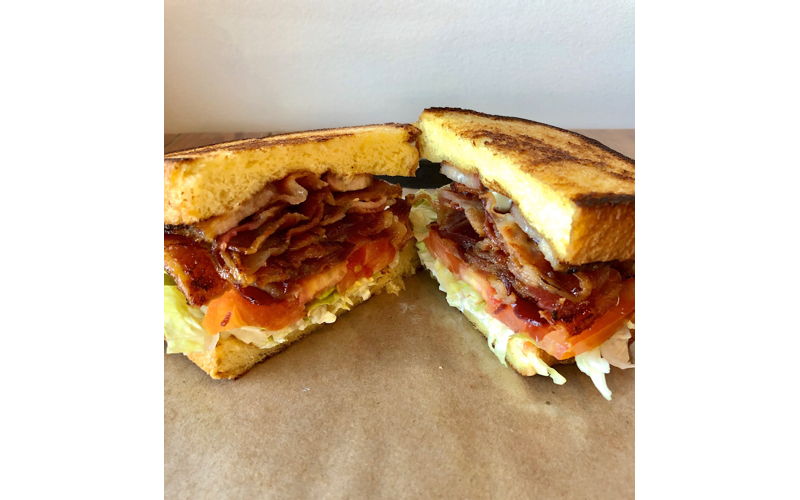 Forgive me Father, for I have sinned.

The descent into a life of transgressions is a swift and slippery slope. Mine began quietly, with a single photo posted to Instagram. My heart skipped a beat as I considered the sultry, seductive, meat-filled wonder, along with the caption, “I spy a special sammy on rye!”

Thus commenced an expedition to sample and celebrate seven different ‘unsung heroes’ of the sandwich variety, and the Lewis Barbecue Reuben ($14) marked the start of a fall from grace. I didn’t see it coming, but as the flavors of the rich, smoked pastrami mingled with the tangy sauerkraut and creamy mustard Swiss cheese sauce, I was consumed by the first of the deadly sins, lust.

Yes, Lewis’ barbecue platters are divine, and I suggest you stick with them as there probably aren’t enough of these Ruebens to go around. Available only on Thursdays from 11 a.m. until they’re gone, I hope there’s a contingency plan in place for the day the last one is sold to the person in line in front of me. Love can make a person do crazy things.

Then it was over to Home Team BBQ, another purveyor of limited availability sandwiches du jour. Hip to that trick, I stuck with the regular menu’s BBQ Burrito ($11.50). It arrives sliced in half, and if you are/were one of those kids who freaked out should dissimilar foods touch, I suggest you look away. The soft flour tortilla revealed an interior filled with pulled pork, cole slaw, creamed corn, and mashed potatoes; so weird and so damn good. Kudos to whomever dreamt up this crazy ‘leftovers surprise,’ as it’s chockablock with fillings and flavor, and uncommonly delicious. Once I finished my half, I began to covet my dining companion’s remaining bites. Overwhelmed with a desire for more, in a greed-filled daze we moved on to Smoke BBQ.

Made with pulled pork, brisket hash, pimento cheese, and some tangy slaw, Smoke’s Sloppy Smoke ($8.95) is a thing of beauty. “Make sure to wear your seatbelt with that one!” someone cheerfully called out as it was set upon the table. Sure, we may look full, but there was still some room in there. As our eyes locked, my feasting companion and I bit into the tender Brown’s Court Bakery bun, soon making contact with the delightful melange of meats found inside. Filled with overconfidence and a sudden swagger, foolish pride tricked us into consuming the entire thing.

Poogan’s Smokehouse is no place for quitters, nor anyone in tight pants. It’s also home to The Four Porksman ($17), an epic gut buster of a sandwich that’s quite possibly a sign of the apocalypse and would make for a suitable triple-dog dare. Filled with pulled pork, pork belly, bacon, and American cheese, the metaphorical cherry on top is a St. Louis rib, literally affixed to the top of the bun with a toothpick. Attempts to pick it up result in an immediate structural fail, but once lightened to about two-thirds of its original load, the tender, smoky medley of pig encased inside the soft, sweet bun suddenly makes gluttony seem like a good idea. Oink.

Thank the stars for the 20-minute drive to Martin’s Bar-B-Que Joint on James Island, and the necessary respite from chewing, swallowing, and digestive distress. Upon arrival, the smoky barbecue smells are tantalizing, but alas, I’d been sent to try the Fried Bologna Sandwich ($5.99). Taking a seat on the bright outdoor deck, we struggled to control our jealousy at the sight of the whole hog, live fire, Tennessee-style swine landing on other tables. Nonetheless, if a big, bounteous bargain is what you seek, this budget-friendly sandwich borders on ridiculous. “Oh my god!” blurted my gorging companion upon seeing the Alice in Wonderland-like proportions. An inch-and-a-half thick and topped with mustard, onion, and pickles, it also left me to wonder what other foods I could blacken on the outside that would remain pink and unchanged on the inside. If this bologna had a first name, it would be C-H-U-B-S.

On to Black Wood Smokehouse and a date with their upscale BLT ($13). This is also around the time fatigue, lethargy, and meat sweats kicked in. Filled with bacon, pork belly, and herbed aioli, as well as the requisite LT, Black Wood’s rendition of the classic is a full-bodied upgrade. Held together with super sweet Hawaiian bread and accompanied by crispy pork rinds, the still-crackling Pop Rocks of the meat world, I was no longer certain if I was living my best life or potentially ending it.

Can there be too much of a good thing? For my pigging out companion, yes, as this is where they got off the ride and abandoned the mission.

Alone, buttons popping, I staggered into Swig and Swine. Although self-loathing threatened to consume me, I persevered and consumed part of a Burnt Ends Sandwich ($13) instead. The salty, crisp, and chewy ends and fiery self-hate provided a pleasing contrast to the slightly sweet bun, but at this point, eating even a few of their expertly pickled onions seemed like a bad idea.

As I waited for a to-go box and wondered if my pants would stay intact long enough to complete the walk of shame back to my car, I reflected on the original, rhyme-y Instagram post and was inspired to pen a verse of my own.

Ode to the Meat Sweats

Here’s to the heroes and hoagies, the
whole sandwich rainbow,

The thick-cut bologna, the size of a chapeau,

Washed down with burritos stuffed with mashed potatoes.

But I would not advise this all in one day, yo.

Blessed with a bounty of barbecue options, it’s a good time to be eating out in Charleston.

Yes, you can be like everyone else and fawn over the platters, but those in the know occasionally take the road less traveled and sample some of the creative sandwiches. Just maybe stop after about three deadly sins, as attempting all seven is not recommended.