Get your South on at Folly’s Center Street Kitchen 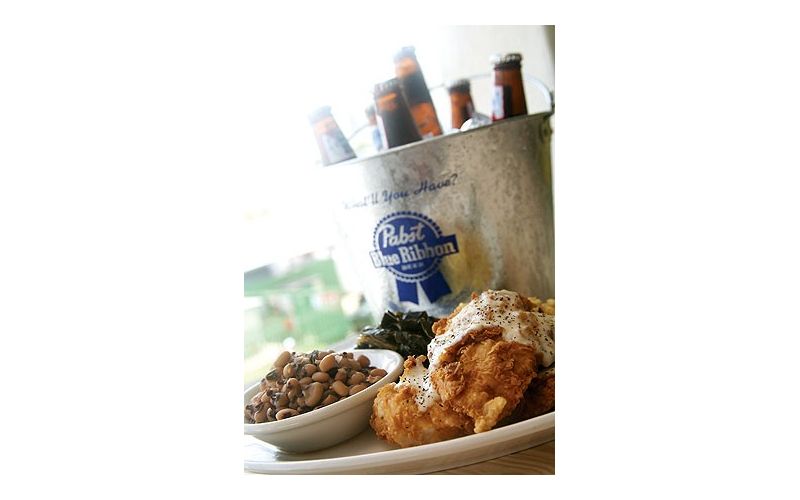 Broke wallets always seem to bring homestyle cooking out of the woodwork, and the current economic season seems to be putting more okra and shrimp on Lowcountry menus than ever before. So long as you’re still gainfully employed, it’s a beautiful time to be alive and eatin’ in the Lowcountry.

For the last several months, I’ve been envious of my colleague Robert Moss, who seems to get dispatched to all the downhome meat-and-two’s or -three’s across town, while I’ve been on the steak and lobster circuit sopping up expensive fare fit for kings. But this week I got to indulge in my favorite foods at the new Center Street Kitchen on Folly Beach, the most honest effort at tourist food to come forth in some time. We eventually found ourselves bellied up to the bar upstairs, catching the breeze with a cold margarita, a plateful of the best fried shrimp and squid to grace Folly, and the inability to move due to the sheer volume of food scarfed down in an hour and a half.

How you justify your new love of the Kitchen is not important: chalk it up to the singular cast iron skillet gracing the sign, the universal symbol of the Southern kitchen, or the unencumbered font with which they spell the name, or perhaps the fact that nothing — absolutely nothing — on the downstairs menu exceeds 10 bucks. Compared to what has been passed off to Folly Beach tourists in the past, this place is as bona fide as the hot pluff mud off a steamed oyster. Think soul food café meets your grandma’s kitchen table, with sun and sand just a few short steps away. Bring your flip-flops and prepare to chow down.

If anything, Center Street Kitchen is too damn nice, gussied up like a fake seafood or soul food joint downtown, a bit too clean about the ears, too freshly painted and lacking patina, but we’ll chalk that up to newness and hope that 10,000 sandy feet over the summer will wear that slick right down to the bare wood. Same goes for the food.

You gotta love a five dollar jar of pickled veggies, full of cinnamon, spice, and that sweet, sharp bite that always takes you back to grandma’s summer garden. They’ve got the fried green tomatoes ($6) and black-eyed pea cakes ($5), which could use a little less bread and a bit more grease. The concoction called “Baked Pimento Cheese with Grilled Andouille Sausage and Crackers” ($7) — that would be Ritz crackers, straight out of the box — is stellar. The cheese bubbles under a spotted brown top, like a savory liquid tart. I slathered it on everything in sight, including some tortilla chips that came out with the “BBQ Pork and Queso ‘Sundae'” ($6), which might be the best late afternoon snack served on the entire beach, overflowing with sour cream, hot sautéed tomatoes, and sticky pulled pork.

A full board of salads and sandwiches plays with Southern permutations of fried shrimp, barbecued pork (which I assume necessitates the barbecue rig parked right there on the side street that runs by the back door), oysters, and fried turkey. There’s a hot dog piled high with chili, cheddar cheese, slaw, and fries ($6), and a big brawny pulled pork sandwich on hot griddle-fried Texas toast ($8) — and for a not-all-we-do-is-barbecue type joint, it fares pretty well. And then there are the three entrées — shrimp and grits for the real tourists (which I ain’t eatin’, $10), a decent looking seafood gumbo ($10), and some of the best fried catfish I’ve ever tried ($10). The interesting “crab succotash” layered underneath the catfish, which actually tastes like what you think a crab succotash should, also deserves its own shout-out.

But I’m going in barefoot for the meat-and-three plate ($10). Let me count the ways: big ol’ fried pork chop? Check. Fried turkey? Yup. Meatloaf? Gotcha covered. Chicken-fried steak smothered in white gravy? Eat your heart out Guy Clark — all we lack here are some homegrown tomatoes. You can pile that plate with sticky red rice, a somewhat dry and not-cheesy-enough mac and cheese named “Sandra,” a poor excuse for okra and tomatoes, cheddar grits, “collared greens,” and more. Some are good, some are great, some need adjustment, but what do you want for 10 bucks? Eat, son.

I left stuffed, in part because after eating downstairs, we sampled the more creative fare at the new upstairs. The Porch, as they call it, has a separate menu of interesting tapas. It’s a bit too new for passing judgment, but with delicious little morsels like the pulled pork and collard green egg rolls, and those aforementioned shrimp from heaven, it should prove to be the nicest perch from which to watch the world go by on Center Street. It felt a bit more frou-frou than the downstairs ($8 glasses of grocery store wine?), until I noticed the country music and an ARCA race on the tube behind the bar. I tell ya, with the addition of a gator wrestling pit and some jean shorts on the waitresses, this place could really hit it big on the beach.