George Takei lets viewers into his life in new documentary 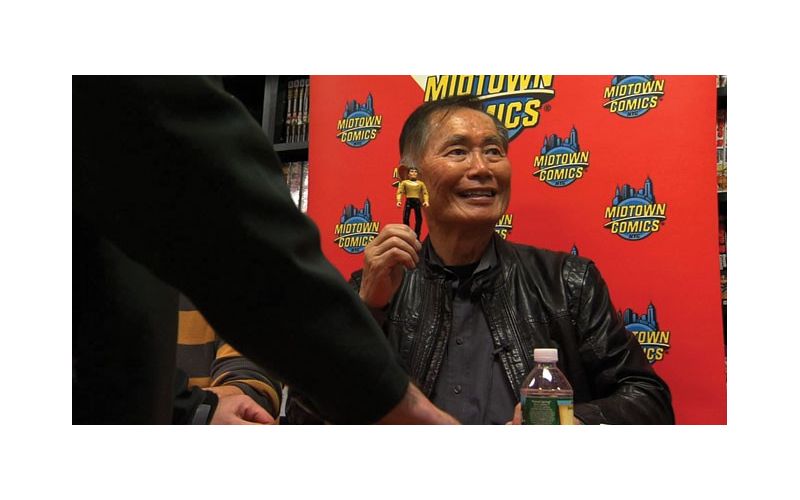 George Takei, the man who will forever be known as Sulu from the Star Trek franchise and propagator of much humor and viral memes on Facebook, gets a life rewind in the documentary by Jennifer M. Kroot. The film is essentially a “hanging with George Takei” reality show with Kroot and camera in tow.

The flick begins as a lazy fandom hagiography of sorts, but it develops into something much more as Takei, taking the narrative reins, delves into his struggles: first, as a young Asian male in America and his perseverance through the injustice he suffered as a Japanese American during the Second World War and later, as a gay man coming out to support Proposition 8 in California.

Many of the cast of the cult-worshiped ’60s TV show and ensuing movie series chime in — and it wasn’t as buddy buddy on the set as it was on the bridge of the Enterprise. One reveal is that William Shatner and Takei have had a long-running frenemy feud. Shatner, like Leonard Nimoy, says he wasn’t invited to Takei’s wedding though Takei insists the whole cast was invited.

Thankfully, the film doesn’t focus too much on the Trekkie phenom and what other cast members thought of Takei (Nichelle Nichols, who played Uhuru and Walter Koenig, who played Chekov, have both stayed in touch with Takei over the years and offer the girth of the reflections).

Familiar faces like gay activist and writer Dan Savage and Asian-American actor John Cho also appear and offer bland insights without much depth; Cho also provides viewers with a starting off point in a discussion on the demeaning history of Asian stereotypes in film, including Takei’s first role dubbing Rodan). Despite such meaty subjects, Kroot doesn’t dig in, and when Takei isn’t leading the charge, the film ebbs, primarily because we miss the actor’s sheer ebullience and deep baritone.

After some initial silly giddiness, we get down to the worst period in Takei’s life when the native Angeleno and his family were sent to an internment camp in the Arkansas swamp. Takei’s matter-of-fact discussion of his days as a prisoner of war clearly masks both his humiliation and anger. “In Japanese we have a word called gaman,” he says, “which means to endure with dignity.” During the Reagan era, Takei testified before Congress to help get redress and restitution payments for those placed in the camps. Kroot, effectively and on cue, layers in footage from WWII from racist bigots in California who not only hoisted hateful signs but also warmly promoted segregated enclaves.

In Takei’s universe, backward-trending agendas in California are not just a thing of the past. The actor turned activist was hopeful that gay marriage would get a fair shot when Arnold Schwarzenegger became governor (“His rhetoric was, ‘I’m from Hollywood, some of my best friends are gays and lesbians.'”), but Schwarzenegger struck down a proposal to legalize same-sex marriage. That’s when Takei decided to come out publicly, even though he had long been openly gay — he met his husband Brad through a gay running club, and the two have been together for nearly 25 years.

Takei’s roots in activism go back decades earlier when he helped Tom Bradley, LA’s first black mayor, get elected. The actor later made a run for city council before going to work for the city as a transportation liaison. But when Star Trek: The Motion Picture relaunched the mothership, Takei left public service.

Biopics can be a tedious affair if not well tended — To Be Takei threatens to ramble at times — but what keeps the effort engaging and rooted is Takei himself. The man is a rife vessel of charisma and charm. While the documentary bares some tender moments between Takei and his husband, like Brad dispensing his mother’s ashes from a mountain top, Kroot, who’s a bit knock-kneed at staging and developing, is effective and vicious at the editing board. Besides the quips with Shatner or Takei’s apparent love of Howard Stern (Takei regularly appears on the shock jock’s radio show), the most reverberating barbs come when Takei takes on, and dismantles anti-gay homophobes, including Stephen Baldwin and Tim Hardaway.

The film wraps with Takei in a performance of his stage play Allegiance, a heartfelt depiction of his family’s travails in the internment camps. At 77, Takei is a busy guy with no signs of slowing down.