Gentrification breaks a neighborhood down from the inside out 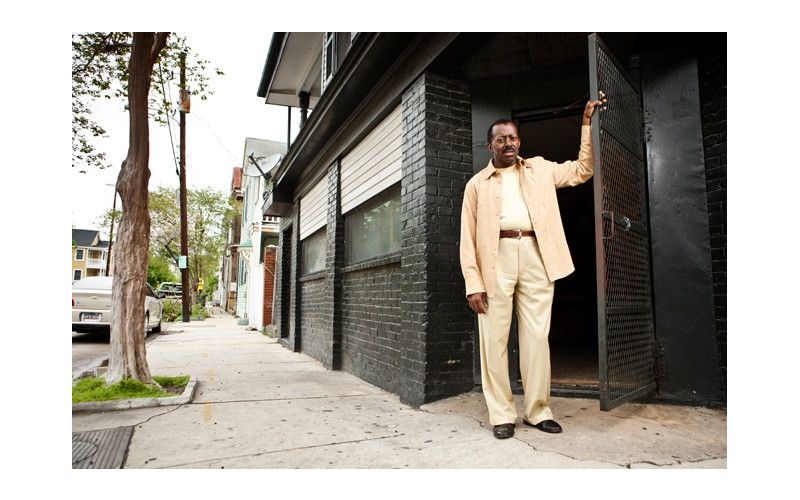 When Joe Watson was a child, his family moved two doors down to the corner of America and Amherst streets in the Eastside of downtown Charleston. Watson recalls befriending his new next door neighbor, a woman named Daisy Lucas, who mentored him into adulthood on the bustling block where his family ran a corner store selling sweets and household goods.

“She started talking to me when I was 8 years old,” Watson says. “I’ve always loved that, and for years until she died, the conversation continued, all that time.”

It was her guidance that instilled in Watson the values of self-sufficiency and community he still holds today. “Growing up here, my warnings about life and things that could happen to me didn’t just come from within the house,” Watson says, pausing to ring up the kids who have come into his corner store to buy candy on the first warm Saturday of the year. “It came from the people here in the neighborhood.”

Now 63, Watson has seen a lot of changes in his neighborhood over the years. When he was born in 1949, it was racially mixed, but during the ’50s and ’60s it became almost all black as residents were displaced from farther down the peninsula in a first wave of gentrification. According to a study by the University of Florida, “A second stage of gentrification emerged in the 1960s and 1970s as the Old and Historic District grew significantly. During this period, economic incentives in the form of federal funding and tax breaks fueled the gentrification process. During this period, middle-class whites began to move back to the city often displacing black residents.” Then, in the ’80s and ’90s, Watson watched as developers began buying up large plots of land to capitalize on the growing tourism industry. Since 1990, roughly half of the black residents who once called downtown home have been priced out of the downtown area.

Watson sees one facet of the problem as the lack of willingness by the upper class to follow the basic Christian principle of “treating thy neighbor as thyself.”

“We’ve got what you call a blue blood mentality, and that control is in place that doesn’t allow Charleston to move forward, to strive forward,” he says. “It’s like as long as we can keep people down, keep poor people down, then we’re doing well. As long as I can close my door and have all the comforts of life that’s what I want. But that’s not the world that their children and their grandchildren are gonna survive in.”

Kwadjo Campbell, a City Paper contributor who once represented the Eastside area on City Council, notes that while gentrification’s biggest impact is the loss of wealth in the form of homeownership, there is another huge change taking place: the human cost incurred when communities are dismantled from the inside out. “It’s an erosion of the social and cultural history of that community,” he says. “That cohesiveness that was there is no longer there. You lose that when everyone’s scattered.”

Watson endeavors to maintain the fabric of his community by welcoming new residents into the neighborhood and taking care of the children in the neighborhood, just like Daisy Lucas took care of him all those years ago. From his post behind the counter, where he spends a significant amount of time talking with his neighbors, Watson sees two major factors causing gentrification and loss of cohesive community: a lack of decent jobs and a public education system that is failing to serve the needs of children in the neighborhood. “The public education system in downtown Charleston — the curriculum isn’t set to, say, help the inner city children,” he says. “It is set in a way that is doing the minimum instead of trying to do the maximum.” For over a decade now, Watson has been involved in several projects designed to mitigate the impacts of gentrification, like the Staying Put Initiative, which helped residents stay in the Rosemont area by paying for their rising property taxes. Watson also helped with the establishment of a charter school, the Charleston Development Academy, in the Eastside. He is proud of the fact that the school has been striving to provide a better education for students in the area with smaller class sizes and a focus on academic excellence. “[Gentrification] ain’t something that I should feel bad about, it’s how do I overcome it? You overcome it by putting the Staying Put Initiative in place, you overcome it by bringing the jobs in there, you overcome it by making sure that a segment of every major housing development like that one right there on Meeting and Spring Street is reserved for low income folks. That’s how you neutralize gentrification.”

Campbell notes that the black community must also be fully integrated into the economy of Charleston to slow the effects of gentrification. “Residents must be integrated into the economic engines driving the local economy beyond tourism where we primarily function as menial workers,” he says, “The City of Charleston is always looking for innovative ways to develop more affordable housing stock, and I believe more partnerships like the one with PASTORS Inc., and the Humanities Foundation are the way to go.” With a focus on solutions and community-based problem solving, Charlestonians like Watson and Campbell have their eyes on the prize: an Eastside community where all residents can thrive. Watson says, “We should be able to grow this entire peninsula. We should be able to grow it to where it comes back to being a wholesome community, and all the needs for the children here are being met, and all the needs for the citizens to be able to strive forward are being met. That’s what I want to see.”