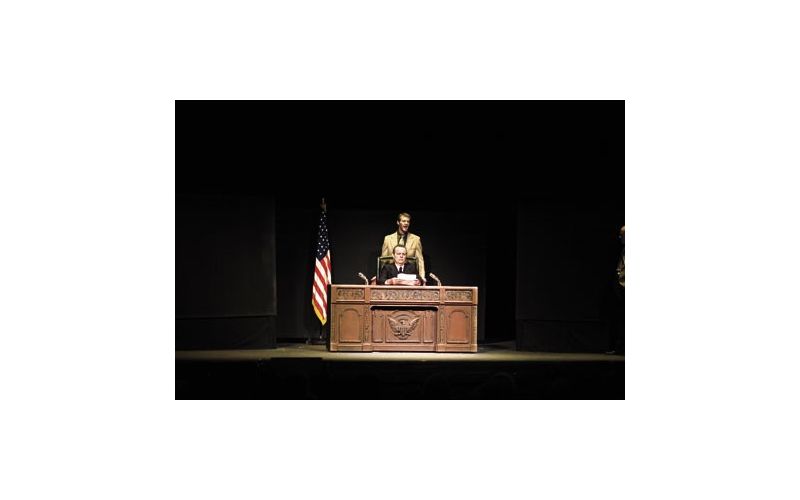 It turns out there is a Richard Nixon fan site. The online club’s description reads, “I know he committed a crime, but we have to look back on the good that he did as the 37th president.”

The site has five registered fans.

Of course, as Footlight Player’s Frost/Nixon demonstrates, Nixon was never the warm and fuzzy guy that someone like David Frost seemed to be. Nixon’s tendency to perspire at inopportune moments did not help him. On the rare, awkward occasions he took a stab at being chummy, Nixon’s formality got the better of him. A good example: waiting to begin another session of his historic interviews with Frost, Nixon inquired of his host, a famed playboy, “So, David, did you fornicate much over the weekend?” Frost was speechless.

And yet, Frost/Nixon does manage to humanize this often demonized politician.

In this fast-paced evening, Mark Landis as Nixon captures the man’s brittle gravitas. Landis’ delivery even seems to suggest the whirring cogs of his thought process. Jamie Smithson, as Frost, is the polar opposite: gregarious, more than a little frivolous, a lightweight outclassed by Nixon’s trial-lawyer bearing but determined to enter the ring with him in hopes of saving his own flagging career.

Like all good prize fights, they each have a team in their corner.

John Birt (Christian Self), Bob Zelnick (Randy Risher) and Jim Reston (Boogie Dabney) handle the worrisome details for Frost. Risher, Dabney, and Self convincingly portray the passion their characters bring to Frost’s project as well as their growing despair that their man may not be equal to the task.

Jack Brennan (Josh Wilhoit) is Nixon’s right hand man, and in this role Wilhoit becomes the picture of honorable grit and loyalty to his president. Nixon’s television agent, Swifty Lazar (Rob Maniscalco) comes off as Nixon’s equal in cunning negotiation.

The teams agree to limit each two-hour interview to one topic. The last interview will take up the infamous Watergate break-in and Nixon’s role in the cover up.

The stakes could not have been higher for either of these men. Nixon’s team has plotted a strategy of strict message control, Landis faithfully renders Nixon’s discipline in the early stages. Frost is woefully overmatched. In an emotional scene, Smithson reveals his character’s frustration with his inability to score a single point on the disgraced president.

Using a video screen behind the players, the production underscores a modern twist on a device that young Hamlet knew very well: in this case, the television’s the thing wherein Frost hopes to catch the conscience of the king. The projected close-up of Nixon’s face the moment he realizes that his grand ploy to “set the record straight” has slipped from his grasp becomes his tragic valedictory.

Frost/Nixon‘s standout cast drive one point home. The nation’s need to put Watergate behind it was never adequately served by Gerald Ford’s pardon of the former president. The nation required an accounting from the culprit himself. Frost, the unlikely agent of the national will, managed to secure it. But the play leaves open the question: Did Frost really score an unblemished victory or did Nixon write his own political epitaph with the admission, “I’m tired.”

Both as a history lesson and a gripping evening of theater, Frost/Nixon is a compelling must-see.