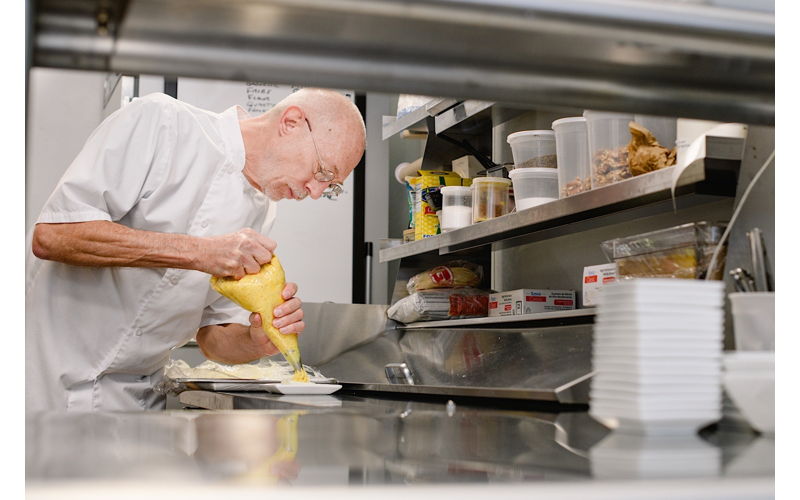 Being a chef is mentally, spiritually, emotionally draining — the long hours, the shitty pay, the ever-mounting pressure. It’s perhaps the physical aspect of the job, though, that is most depleting. The square footage walked (you try getting from the dish pit to the hot line to the upstairs dry storage in a minute flat), the blisters, the burns. But for Bourbon N’ Bubbles executive chef and food and bev vet Steve Jackson, the miles earned are all part of the fun.

“I haven’t been to a gym in years,” laughs Jackson. “Catering is one of those things — I wore a Fitbit for a long time, I realized in the catering facility I would walk three to four miles a day.”

Jackson’s been on his feet for a while now — other than a brief stint selling electronics so he could focus on his family — Jackon’s done everything you can do in the culinary world. Resumé highlights include owning his own barbecue biz, Mr. B’s Barbecue, on Johns Island; working as the chef for former governor Richard Riley; and working as a chef for Duvall Catering for eight years until mid-2018, when he signed off for the exec chef position at Bourbon N’- Bubbles.

“Seventy hours a week during busy season was not unusual,” says Jackson of his Duvall days. “We were doing 10 to 12 weddings in a weekend, getting product in, processing it, then getting it set to go out. The chefs, we tried to prep our own parties, to be held responsible for what we were doing, because we were going to be [serving it] in front of these guests.”

Jackson started catering quite accidentally, when patrons of Mr. B’s would ask him to be the head hog at their private events on Johns Island and Kiawah. “They kind of forced me into catering because they offered a lot of money. It was something different, different people, different menus. It was exciting and exhausting at the same time.”

One day, while in the kitchen at Mr. B’s, Jackson says he looked out in the dining room and saw a couple of familiar faces: hotelier Hank Holliday and chef Bob Carter. The two were “sitting beneath the flourescent lights” closely examining one of Jackson’s hushpuppies. “So I go out there, I already knew they were going to open Hank’s,” says Jackson. “I said ‘hey you want to know how I make my hushpuppies?’ I walked them back in the kitchen and showed them. I said ‘I know you’re opening up a seafood restaurant and need to know how to make good hushpuppies — just promise me this, don’t put any green shit in them, I know you like to fancy it up.”

Lo and behold, a few months later on a vist to the newly opened Hank’s, Jackson did in fact detect the offensive green stuff, but that didn’t stop him from forging a friendship with Carter and Holliday. Jackson would go on to cater a Relais & Châteaux gala at Middleton Place for his buddy Holliday, who just happened to be the North American sponsor, hosting guests from all over the world for the high-end hospitality company at Planter’s Inn. “Relais & Châteaux handled all the decorations — it was quite an extravaganza. I did whole pork and sides, it was a collaboration between me and Bob. It was something I never imagined doing,” says Jackson.

And though he never imagined moving from the kitchen of a small flourescent-lit barbecue joint on Johns Island to cooking for hundreds of gussied up guests, working for one of the largest catering companies in the city, Jackson embraced the change. Even when it meant doing things a little out of his wheelhouse.

“When you’re in a field, miles away from any kind of support, you have to be a little MacGyver to figure out why the oven is not working,” says Jackson. “I always carried a hammer and crescent wrench — man as a tool maker! One time I didn’t have enough oven space to get meat in at Magnolia’s — I said, ‘Oh I’ll cook it on the truck,’ but then their electrical system isn’t working and I’m looking at the watch tick tick it takes two hours to do this, three hours until the wedding, you just have to make things happen.”

And while the challenges of serving 300 people at the Wickliffe House on a Saturday in June are not comparable to serving a surprise 20-top at a busy King Street restaurant on a Friday in March, they can both be daunting as hell. In a kitchen, at least, you’ve got all the tools (hopefully) that you could ever need. Catering a wedding, fundraiser, or corporate shindig means your four walls are wherever the hell the client wants them to be.

“When you’re taking product out, you could be in a tent, a basement, a side porch balcony, as I did many times, during a thundering storm in July,” says Jackson. “You have to learn to adapt to the situation.”

At Bourbon N’ Bubbles, Jackson is confined to the kitchen, not able to interact with guests as much as he’d like while churning out snacks and small plates like orzo tots and classic beef tartare every night. With his catering background, Jackson has food costs pounded into his brain — “at Duvall we were buying hundreds of pounds of crab meat” — sometimes to the point where general manager Zach Dennis has to remind him to loosen up a little. “It goes against every bone in his body,” laughs Dennis. “I said ‘Jackson, you can run a few points high, let’s swing for a bit and do something fancy.'”

And while the upper King bourbon bar doesn’t have Jackson walking miles a day, or gleefully MacGyver-ing his way out of sticky situations, it still keeps him on his toes. Discussing their showing during the most recent Restaurant Week, Jackson lights up, “I feel really good about it, it was challenging. When it came time to do 75 reservations — my table I’m working on is on the other side of the line where the sous is doing steaks and 25 portions of golden tile and I have to walk through him and another guy and the expediter — it’s like an obstacle course.” When he does have the opportunity to leave the kitchen and get back into the field, another beast of an obstacle course, you can bet he’s ready.

“We’re doing that Bacon and Bourbon thing,” says Jackson. “Restaurant chefs when they get out of their little area it is difficult for them to translate what they do in the restaurant out into the real world. I try to bring with me here that ability. 1,500 people? I understand that.”