From Backman’s briny beds to the Grocery’s blazing fire 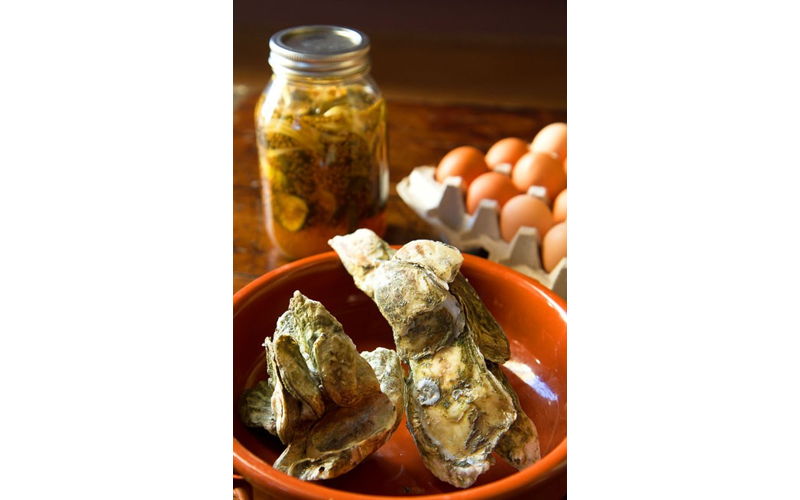 “We Catch Our Own,” reads Thomas Backman’s business card. The statement isn’t as true as it once was, when the docks at Backman’s Seafood on Sol Legare Road were lined up with six shrimp trawlers. Fuel prices have made his shrimp business a distant memory, but Backman’s boat still sits at the dock waiting for a day (maybe this spring, he hopes) when it can head back to sea.

“You’re supposed to pay to go out and get paid to come back,” says Backman of the shrimping trade. “Now you pay both ways.”

Fortunately, another more easily accessible bounty keeps Backman’s local seafood trade afloat. Two oystermen still leave from his dock each day, filling their boats with bushel after bushel while the tide is low enough to harvest the plentiful beds along the Folly River. Their catch is stored in a walk-in cooler literally inches from the marsh. Nearby are relics from his shrimping days, like a dock with train tracks that once moved 300 lb. blocks of ice to the trawler.

It’s exactly the type of operation that Chef Kevin Johnson hopes to support with his new endeavor, the Grocery. After seven years at the helm of Anson’s kitchen and a short stint with REV Foods, Johnson discovered the vacant Altman’s Furniture building at the corner of King and Cannon streets. He turned the old warehouse into a spacious dining room and full kitchen and designed his menu with a community focus, offering taste, plate, and table portions that lend themselves to sharing and adventurous eating.

“What I’m trying to do with this space is put the focus on suppliers,” says Johnson, citing the restaurant’s mission of featuring “our favorite farmers, fishermen, foragers, and artisans.”

Two weeks after the Grocery’s opening night, Johnson got a lesson in longevity thanks to a visit to Sol Legare for a bushel of local oysters.

The son of a lifelong shrimper, Backman opened his seafood stand in 1961 with his father’s help. His mother Susie was busy running their shrimping fleet; a photo of her with an accompanying newspaper article hangs proudly on the wooden walls of the roadside shack.

Sadly, that day will likely be the end of Backman’s Seafood. Thomas’ seven siblings have either passed on or followed pursuits apart from the family business. But for Backman, who was born in the house across the street, there was never any other option.

“You stick with what you know, and then you can make it,” he says with a smile, before playfully admonishing a visiting tourist-looking couple to address him as “Mr. Love” instead of Backman.

After returning to his kitchen with a fresh bushel, Johnson reflects on the Backman legacy. “The history of that little zone down there is just amazing,” he says, scooping an armful of oysters into a cast iron casserole dish and placing them just inside the mouth of the Grocery’s wood-burning oven. Thirty minutes later, a steaming mound is served, simple and clean. The only condiment is a bottle of housemade mignonette, comprised of shallots, cherry vinegar, and black pepper. The freshly steamed oysters are delicious, but Johnson’s oyster masterpiece is the fried variety he serves with a deviled egg sauce and bread and butter pickles.

“It was literally one of those driving-in-your-car moments that chefs have,” he recalls. “In the South, who doesn’t love deviled eggs?”

To make it, Johnson purées a hard-boiled egg (from Celeste Albers’ chickens) until it’s light and fluffy, adding cayenne, Tabasco, mustard, and mayonnaise to the mix. The resulting sauce forms a bed in the oysters’ shell, before the Anson Mills corn meal-encrusted mollusk returns to join it. Johnson picks a jar of homemade bread-and-butter pickles from the shelf in the dining room, dicing them up to top the crispy mouthful.

“You end up with the rich acidic tang of the deviled egg, and then the briny crunch of a fried oyster, finishing it off with that sweet acidity from the pickle,” he explains. “It’s one of those things that enters your brain before you even taste it.”

Johnson’s fried oysters may be just the ticket for converting non-believers. The challenge will be adapting a dish like this to utilize Backman’s local clusters. For a big, juicy bite and clean presentation, Johnson usually serves Gulf Coast singles, but that’s not stopping him from firing up an impromptu oyster roast with Backman’s bivalves, steamed in their own liquor by the coals of his wood oven.

“It really fits the idea of ‘table’ portions that we’re striving for,” says Johnson. “Fill up that casserole dish and get a fire behind ’em.”