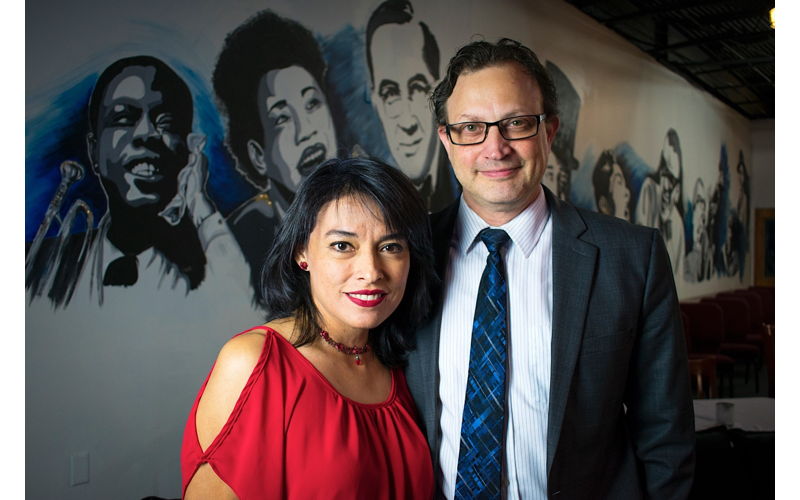 Upon entering Forte Jazz Lounge, the new King Street music venue, visitors are greeted with reminders of the past. Pictures and drawings of jazz icons decorate the walls that wind around to a performance space. Tables with white cloths and couches point toward a stage that can accommodate swing-era big bands or small bebop trios. The business’ design makes a statement. Jazz isn’t background music here; it’s the main event.

“I really hope that this becomes an important place for everyone to come and enjoy and listen to jazz without any other demands,” owner Joe Clarke says, looking around the room.

Clarke and his wife, Rosie, opened Forte over the summer, believing that a jazz club could act as a source of entertainment for locals and a training ground for new artists.

“I think that it could be a place that will be regarded by musicians as an important place for music development, and their development as professional musicians,” says Clarke. “But, I hope that people who live in Charleston will find value in it and come back to it, again and again.”

Just like some of Charleston’s most beloved venues, Forte will put their focus on local artists, providing them with a place to perform originals and jazz standards. Chris Williams, Kat Keturah, and Alvah Anderson are already slated to perform through September.

“I think Charleston has a very large, diverse population of guys and girls who have really honed their art, and have been doing it in the corners of restaurants, weddings, and cocktail parties,” Clarke observes. “I feel like it’s time that they have a little bit of a spotlight.”

Jazz fans know how many subgenres have spawned from the music in its century-old history. Dixieland, avant-garde, bebop, third stream, Latin jazz, fusion — and those are just a few of the essentials. As Clarke puts it, all are welcome at Forte, though he can’t promise every subgenre all the time.

“I’m not excluding anything. If it involves musicians up there expressing acoustically their art, then we’re good,” he says. “But for the most part we’re catering to the average listener who likes jazz.”

Forte has only been open for five weeks, but the venue is booked through December, according to Clarke.

On Mondays, Clarke’s own group, the Joe Clarke Big Band, uses Forte as a rehearsal space, and he says that they will occasionally open these sessions to the public. Clarke has expressed interest in further growing the Charleston jazz scene, hopefully by cultivating the next generation of musicians. In the near future, Sundays will be dedicated to students. Musicians and budding jazz artists can go to Forte and participate in a weekly masterclass from 3-5 p.m. followed by a “student performance opportunity” at 6 p.m.

But, all credit does not go to Clarke; he points to his co-owner and wife, Rosie, for keeping the place running while he’s teaching at Charleston County School of the Arts in North Charleston.

“I’m hoping that we can last enough time to make history in Charleston, in music, and in jazz,” Rosie says. “All these musicians deserve a place to shine.”

While considering why he opened up a jazz club, Joe Clarke says that one word seems to slip out of every patron’s mind.

“The word I keep hearing is that it’s ‘needed’. Every single person that comes through that door, if I’ve had a conversation with them, the word ‘needed. This is so needed,'” he explains. “I don’t know why they say it’s needed, but I think it’s needed because there’s such a diverse population of jazz musicians in Charleston. Somehow we got really lucky.”

Folks familiar with Charleston’s almost arcane jazz history know that luck only had something to do with it. The Holy City has been the home of jazz forerunners at the Jenkins Orphanage, Billboard Jazz Chart-toppers Ranky Tanky, and a popular music school at CofC. If done right, Forte could be the continuation of a legacy that fell dormant to many mainstream listeners.

Forte Jazz Lounge will have their grand opening ceremony on Thurs. Sept. 5 at 5:30 p.m. The Joe Clarke Big Band will perform after the ribbon cutting. Mayor and pianist John Tecklenburg will join the band for the first song.