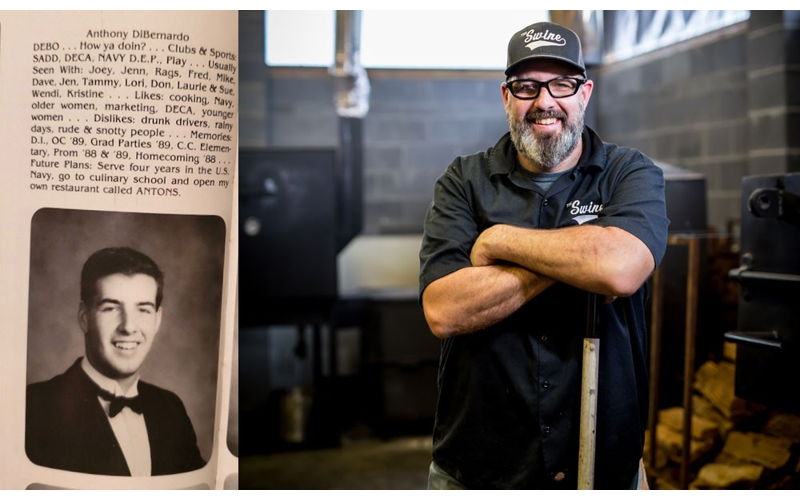 As a kid, DiBernardo would bike 12 miles to his cousin’s farm in the summer to help pick vegetables. The summer of his 13th year he was helping with a landscaping company, and by the time he was 15, the South Jersey native was working the hot line in a country club kitchen.

In 1990, instead of packing up for university, 17-year-old DiBernardo headed to San Diego for basic training, attending the military’s version of culinary school.

Here he not only learned technique, he learned recipe conversion — after all, he was going to be feeding hundreds of hungry peers, not hosting a dinner party. DiBernardo’s father was in the Navy and cautioned his son: no matter what, don’t volunteer for submarine duty.

So of course, DiBernardo did just that.

He was sent to the Naval Submarine School in Groton, Conn. where he says the weeding-out process began. The school was founded in the summer of 1916; within a year the graduates of the first officers course were serving around the world as the country entered WWI. Within two years, at the 11th hour of the 11th day of the 11th month, the Allies and Germany agreed to an armistice — Nov. 11, 1918.

Seven decades or so later, after eight weeks of school on the surface and four months below, DiBernardo proved he had the just right constitution for underwater duty. He was stationed aboard USS Batfish, where he operated out of an 8-foot-by-8-foot kitchen — “well, I guess 4-by-4 because half was for dishes.” He served four meals a day to 130 men. Breakfast, lunch, dinner, and a midnight snack.

“The longest time I was submerged was probably four months, but it felt like we were always gone.” DiBernardo’s sub was a fast-attack, which meant it didn’t stay out as long as the “boomers,” or ballistic missile subs. But four months with no sunlight, no interaction with the outside world — it can get under your skin.

“It was at times the only thing to look forward to,” DiBernardo says of the four meals he prepared daily. “You didn’t know where you were, you didn’t know how much longer you’d be there. There were only so many movies to watch, you have the same bed the same job the same space — it was the only thing that was different.”DiBernardo and his small kitchen crew had to get creative with their storage; they turned the fridge into a freezer, and put all the perishables in torpedo tubes to keep them cool. The 35-pound metal tubs of flour, coffee, and sugar were positioned like Lego in the berthing compartments. Around day 15, the eggs and potatoes and lettuces were used up, and powered eggs and canned veggies started entering the rotation.

He’d been cooking since he was 15, but it was not until he was submerged 600 feet below the murky depths that DiBernardo realized what it really meant to be a chef — it was more than recipe conversions and julienning technique. “It was my responsibility to keep that morale up, to keep it changing and give them something to look forward to.”

After four years of service, DiBernardo returned to the surface and moved to Charleston, working his way around the city’s kitchens, from Blossom to Kiawah Island Resort to Mustard Seed and Rita’s Grill. In 2013, he opened the flagship West Ashley Swig & Swine with Queen Street Hospitality Group. There are now three S&S locations, plus a busy catering offshoot.

This year, Swig & Swine won the Legendary BBQ Restaurant of the Year award from Certified Angus Beef and was named to Southern Living’s list of The South’s Top 50 Barbecue Joints 2019.

Operating a brand at this level is no small feat, but DiBernardo shrugs it off — hey, at least there’s natural light and civilization. He credits the Navy’s training for his barbecue success and notes that even on their longest deployments, his guys never ran out of food.