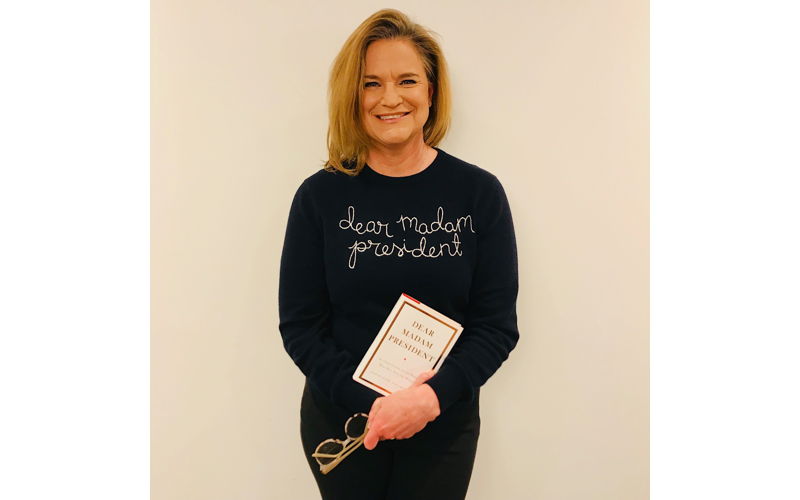 As White House director of communications under President Barack Obama and Hillary Clinton’s 2016 presidential campaign, Jennifer Palmieri has shaped the messages of some of the nation’s most powerful leaders. But it is perhaps her own words that will have the most profound impact on the lives of many Americans.

Originally released in 2018, Palmieri’s first book, Dear Madam President, went on to top the New York Times bestseller list. Penning what she titled as an “Open Letter to the Women Who Will Run the World,” Palmieri now returns to Charleston to share her insight with any locals looking to forge their own path to the top.

“It was the best professional experience I’ve ever had. I was surprised to find that I really liked writing,” Palmieri says of her time putting together the book. “I got good advice from a friend of mine who told me, ‘If you’re going to do this, dig deep and don’t hold back.’ I thought that if I was true to my own experience and what I really believed, even though it is my own story, you are able to share something that has some sort of universal appeal — at least for women.”

According to Palmieri, Dear Madam President isn’t a direct byproduct of her time working alongside Hillary Clinton, nor did she join the Clinton campaign due to a lifelong dream of helping elect the first woman president. Palmieri simply thought Clinton was the best person for the job. Although that’s not to say the 2016 presidential race didn’t prove eye-opening for Palmieri.

“My big takeaway from that campaign was that women have come as far in the world as they are going to go following male models of leadership — whether that’s in politics or business or media or however you engage people,” says Palmieri. “For Hillary, what I realized by the end is that we had made a female facsimile of the qualities that we look for in a male president. No wonder people think she’s inauthentic. No wonder people feel they don’t really have a good sense of her. We all tried to jam her into this ill-fitting suit that was never made for her.”

Palmieri admits that while some of the lessons she shares in the book have been with her for a long time, some things she wishes she had known sooner. Looking back at how Clinton was presented to voters, Palmieri sees a broken model for what is expected of female leaders. Dressing like men, behaving like men — these dated tricks have reached the end of their efficacy. With her book, Palmieri hoped to envision what it would look like for women to lead in their own image.

Now a new crop of Democratic hopefuls look to step in where Clinton left off. And as you’ve probably noticed, the path to the White House covers a lot of ground in South Carolina — territory that Palmieri knows all too well.

“I think the candidates that do the best in the end are the ones that understand at their core why there are doing this and really believe that they are the best person to be president,” says Palmieri, who lived in Charleston for part of her childhood. “The thing that’s great about what I’ve seen in South Carolina is that the Democrats who are there are really interested and they are turning out in big numbers to hear as many candidates as possible. So know that you are going to get your shot to be one-on-one, fact-to-face with actual voters in South Carolina.”

Explaining that South Carolina as a state usually breaks late in terms of who voters will support as their chosen candidate, Palmieri believes that Democratic campaigns winding through the Palmetto State are required to be more creative and inventive compared to states where the party’s power structures are a bit more established.

While it’s been Palmieri’s experience that South Carolina Democrats tend to seek out their party’s candidates in person, she knows the effect that media coverage can have on a national campaign. Asked about the current state of political reporting, the former White House director of communications sees many mainstream media outlets plagued by credibility problems and dragged down by a “dated and dangerous” way of covering politics.

“By being more passive, what that has devolved to is treating politics like a game,” Palmieri says of much of today’s political reporting. “Because if you treat politics like a game and judge candidates on style as opposed to what they are saying, you can’t get into trouble for favoring one over the other. You’re not portraying any of your personal views, but it’s obviously not working.”

In addition to not allowing one political party or campaign to play the press and dominate media coverage, Palmieri sees the credibility problems faced by many mainstream media outlets as one of transparency. This, she says, will require reporters to spend more time sharing with readers how a story came together, who they interviewed, what was asked, what wasn’t, and what remains unanswered.

Being more open about the reporting process would serve to not only better engage readers and humanize journalists, Palmieri believes. It could also prevent candidates from spinning the narrative in their favor.

“Donald Trump saw how the game was played, and he said ‘I’m going to come in and because I’m willing to break every single rule and not follow any rules of convention, I’m going to win this game.’ In cards, they call it shooting the moon. That’s what he did,” says Palmieri. “I know it’s hard to rethink how you do every piece of your job, but I don’t think that the press has thought creatively enough about how they can report on politics so their coverage is more meaningful and has credibility.”