Forget world peas, broccoli could be our saving grace 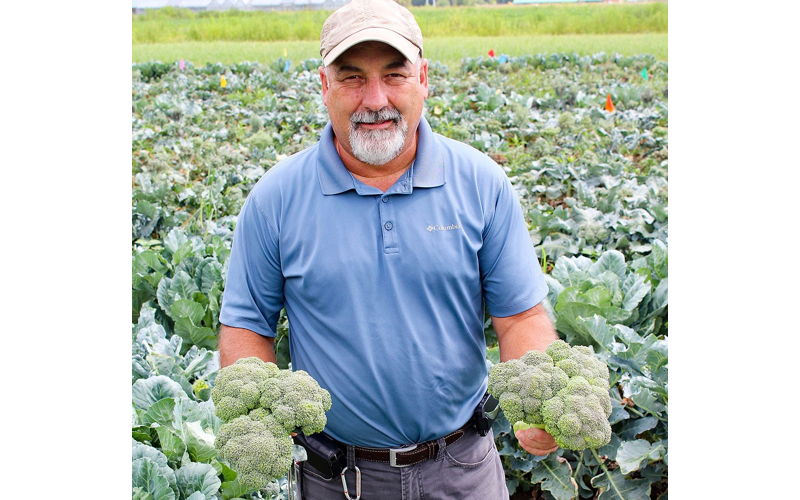 Can broccoli save the world? That may be a bit ambitious, but if Mark Farnham, Ph.D., has his way, the cabbage’s humble green cousin will at least greatly shrink the country’s carbon footprint.

Farnham, research leader at Charleston’s United States Department of Agriculture (USDA) Agricultural Research Service office, has dedicated most of his 25-year career to developing a broccoli that can take the heat. At the Ag Research Service’s U.S. Vegetable Laboratory, he is widely acknowledged as one of the nation’s broccoli experts.

Why broccoli? More than 85 percent of the broccoli we eat here on the East Coast comes from drought-ridden California, and that means using precious water and fuel to ship broccoli across the country to Charleston and other broccoli loving-cities. Local broccoli growers face a short growing season; as soon as it turns hot, broccoli gets really ugly.

“If you don’t have cool temperatures, it doesn’t look like broccoli,” Farnham says. “It starts getting leaves growing through the head, and it gets quasi-cauliflower-like, almost white or yellow. It’s ugly. Technically, it’s edible, but there’s no way you could sell it commercially in a store. Nobody would buy it. It’s deformed.”

Not surprisingly, grocers want “a constant supply at a relatively stable price” when it comes to produce.

That’s where the USDA comes in. Although the Ag Service is one of 90 in the country, it’s one of the few solely dedicated to vegetables, so produce growers across the country look to Farnham and the rest of the scientists to solve a host of problems, including weevils, mold, etc.

California broccoli growers plant up and down the coast, depending on the weather. Shifting the planting like this allows California to provide broccoli year round. Farnham thinks the East Coast can get in on that action.

“A bunch of us on the East Coast believe we can mimic what California does. We can shift production up and down the East Coast,” Farnham says. “It’s already happening. Florida produces quite a bit of broccoli in the winter. The biggest (eastern) producer in the summer is right in the middle of Maine. Even South Carolina can produce a pretty good crop in November and December.” It’s the rest of the year that’s a problem, although the state does grow some broccoli in the spring.

“We need to be able to supply retailers a constant supply for them to really buy into it. Otherwise, they’re just going to go to California,” Farnham says. “Unless water becomes an even bigger issue.”

And water — or the lack of it — is going to become a bigger issue, which is why Farnham is trying to find a broccoli that can take the heat. Creating a new broccoli is not as easy as you may think. A recent mustard green variety took about six years to develop, another four to get to market, and that was a fairly easy one because mustard greens are better adapted to this area. Broccoli will take much longer.

For a plant, a generation is one growth season. Test broccoli seedlings that exhibit heat resistance go into the fields the last week of May and by the end of July, Farnham is evaluating how it has stood up to the summer. The ones that have started to look ugly are ruthlessly discarded. For the plants that look promising, he shears off the tiny shoots the plant has put out and transplants them in vermiculite into an elaborate seedling nursery of carefully labeled broccoli clones. Larger plants developed from the cuttings are kept alive in a walk-in, climate-controlled growth room until it gets cool enough outside to transfer them to a greenhouse. It takes four or five generations of inbreeding — that’s four or five seasons to the rest of us — for the plant to be considered stable enough to combine with another broccoli to see if that combination yields anything promising.

Farnham says that hybrid process is done painstakingly by hand, or the two plants are put in a cage with insects such as bees or flies, who do the cross-pollination. The resulting hybrid then has to go through its own three to five growing seasons to assess its success. It is likely to be a hybrid that eventually saves the day for broccoli. Like puppies and, for that matter, humans, inbreeding isn’t what produces a sturdy specimen.

The end product will be seeds that can grow broccoli that can stand up to South Carolina heat, and whether the USDA gives it away to other plant breeders or licenses it to seed producers who can get it to market quickly is a decision for later.

Meanwhile, Farnham is looking at the long game, which is using broccoli to improve the planet.

“For me, it has been a career. That’s the thing about our agency. We think long-term. But is it even long-term? I mean even one person’s career, in the scheme of things, is it long-term?”