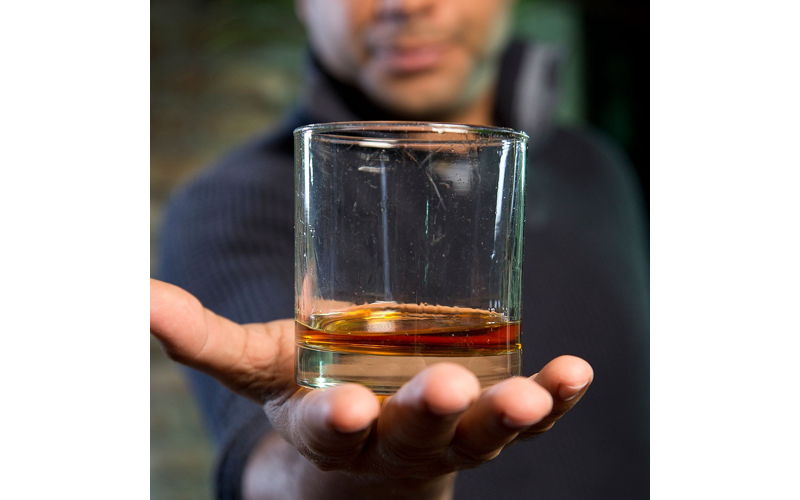 Chef Paul Yellin has one simple goal for Charleston — return the city to its roots. His plan? With his new Cane Rhum Bar and Caribbean Kitchen, Yellin says he’ll transport Charleston to a time before bourbon and bacon took hold and rum was king.

“Charleston was settled by a boat that pulled into the Ashley River by planters from Barbados. The money, the style, the agriculture, and the labor all came from there. They brought their slaves with them, which means they brought their cuisine with them, and they brought rum with them. So Charleston started out as a rum city — not bourbon,” says the charismatic restaurateur and author of Infusion: Spirited Cooking in the Caribbean.

For Yellin, who was born in New York, but moved to Barbados when he was two, history plays an important role in what he wants to achieve in Charleston. He speaks as passionately about politics and the past as he does food and liquor because, for the chef, they are all tied together. Yellin has a personal connection to rum and a keen understanding of the city’s legacy.

Growing up in the Barbadian parish of St. Michael, Yellin started helping out in the kitchen at home at a young age.

“What started my love affair with rum is my mom used to go to auction and collect books, and I asked her to start getting cookbooks for me. We kept finding all these old books. Everybody used to cook with rum. It was in everyone’s house,” he says.

After college, he bluffed his way into a job at one of the island’s most exclusive hotels.

“I worked there for a few months and then got picked to open a restaurant at the golf course, so I went there,” says Yellin. “While I was there, I saw another place being opened up. I passed it every day, and one day on my lunch break I literally just walked in and asked if they were hiring. A week later I had a new position, and that’s where it all got started.” His trajectory landed him eventually in restaurants in New York, Toronto, and Berlin, but now in the Holy City, he’s got one thing on his mind.

“I would like to help Charleston redefine and cultivate their palate of what they thought rum was or is,” he says. “I want to do that through a great space, a fun vibe, and an incredible selection. I want to help reintroduce rum to Charleston. … Rum for me and many people is like champagne. Rum is always associated with a good time. It’s a carnival. It’s a trip that you went on. It’s the Christmas holiday.”

The dirty irony of course is that rum was built on slavery. One of Barbados’ most famous rum producers — St. Nicholas’ Abbey, a 400-acre cane plantation — was home to John Yeamans, the man who introduced slavery to South Carolina. And for all Yellin’s talk of the celebratory side of the drink, he’s quick to acknowledge that history. But, he says, the Caribbean managed to emerge from these harsh times to become a reflection of all those who arrived on its shores.

“Once the money started rolling in through the English planters and the Spanish colonies and the French colonies, rum just took off,” says Yellin. “Unfortunately, the good side of that is also the dark side of humanity. The more money they saw, the more sugar and labor they needed. After they freed the slaves, they started bringing in Indian laborers and Chinese laborers who could work in the sun and work cheap labor. But now the Caribbean is diverse throughout every island. You have all of these mixes of beautiful people.”

According to Yellin, Cane will showcase that eclectic culture through his take on authentic Caribbean street food. It will be food to eat while you drink. As he puts it, “I am a rum bar that serves food. I am not a restaurant that serves rum.” Guests can expect miniaturized variations on traditional Caribbean flavors, such as jerk chicken from Jamaica and flying fish from Barbados. But as Yellin clearly points out, what you shouldn’t be asking for when you walk through the door is an old standby that can be found most everywhere or another take on a well-worn classic.

“How many barbecue places can there be? How much pork belly can you eat? The fact that Cane is here and people are excited is because they want something new. They want something different,” he says. “As a chef being in the hospitality industry for so many years, it’s very confusing for me and very aggravating when I go out and see the same menu everywhere, literally everywhere. It’s a copy of a copy of a copy. The owners are trying to make everyone happy. Someone asked me if I was going to do wings. No, go to Hooters. Why would I do a burger? Husk does a burger, and that’s great for Husk, but that’s not what we eat in the Caribbean. Everybody has a taco. Everybody has nachos. Nobody is doing this.”

Doing what you may ask? Eighty rums, each aged a minimum of three years. Jeff Chaffin, formerly of Blossom, is training to be a rum expert, and he’ll run Cane’s bar that will serve as an altar to a drink. Cane, Yellin says, will not only serve as destination for those well-versed in the ways of rum, but also as a spot where the uninitiated can learn exactly what they like.

“The whole idea is if you sat there and you were honest and said, ‘I really don’t know much about rum,’ Jeff is going to say, ‘What do you like to drink now?’ Then we’ll work backwards. I can narrow down what you will like, what you will appreciate, and a couple tastes into it — you will find something for you,” says Yellin. “Rum comes in such different styles. There are rums that resemble gin. There are rums that resemble bourbon. In fact, 85 to 90 percent of Caribbean rums are aged in bourbon barrels. The bourbon industry is set up where by U.S. law they can only use the barrels once, so since the ’70s the barrels have been routinely broken down, packed in container ships and shipped to Caribbean distilleries. There are a lot of times when you break open a bottle or pour a glass or if you’re lucky enough to have been around barrels like me, you get a distinct bourbon smell, a whiskey smell. You put your nose to it and the first thing that hits you is whiskey, but if you let it breathe a little and warm up, the rum will come out.”

The rum wall at Cane will be arranged according to region, Yellin says. Guests can join the rum club and mark off different drinks as they sample each island’s offerings, with some sort of incentive given for completing your passport.

“You’re going to have darker rums from Jamaica. They’re much darker, much fuller, more wood, more oak. There are rums from Martinique that are so light, just on the smell alone, you say this can’t be rum, but when you taste it, it tastes like grass. It tastes very woody like bamboo,” says Yellin. “When you inhale, you catch different odors. Then you swallow it, and breathe, you say, ‘Wait a minute. It’s like leather. It reminds me of a leather chair or my granddad’s pipe. They have tobacco notes. They have caramel notes. ”

Currently, Yellin lists his favorite rums as Mount Gay, El Dorado, Pusser’s, Plantation, Barbancourt, Gosling’s, Doorly’s, Hamilton, and Appleton. As for local options, the chef also plans on working with Firefly’s Sea Island Rum and the best Red Harbor has to offer. Unfortunately, other than a few areas on Wadmalaw Island where patches of sugarcane are known to grow, the soggy conditions in the Lowcountry aren’t suitable for the large-scale growth of sugarcane needed for the mass production of rum.

Besides the extensive rum selection, he says that Cane will focus on five main house cocktails, starting with a rum and whatever mixer you select to go alongside it. Whether it’s Coke, juice, or anything else, it won’t be coming from a soda gun. Yellin will be serving drinks the way they do in the Caribbean. Order a rum and Coke, and you’ll get a glass of rum, a block of ice, and a can of Coke.

In addition to the rum and traditional mixers, guests will also be able to pick from a rum and coconut water, Barbados rum punch, a Pusser’s Painkiller, and a Gosling’s Dark and Stormy. Those not in the mood for rum will still have several high-quality options at Cane, but keep in mind that it’s a bar for rum fans, by rums fans.

“Lord help me, if you come into a rum bar and order a vodka, you deserve to pay what I’m charging you. If you must have a vodka, I’m going to serve you a great vodka, a very good drink, but it is going to be top shelf. If you want a $4 shot, then please mosey on down the road,” says Yellin. “I can’t be everything to everybody. I don’t want to alienate any customers or push away business. It’s not about that, but I’m certainly not going to be everything to everyone. It’s a rum bar. You have to understand that.”

So, from the founding of Charleston to the city’s current culinary climate, Yellin seems well-aware of the Lowcountry’s past, and he’s ready to push forward. With the opening of Cane, he’s determined to reclaim rum’s rightful position as Charleston’s drink of choice, because even though the times may change, some things never go out of style.

“Consumerism is driven by fashion. In America, we know a white T-shirt and blue jeans will always be in style. Whatever hipster thing comes around this week with skinny jeans tucked into your Army boots and a big beard with a crewcut, all of that is just fads. Two years ago, those people didn’t look like that. You can’t say that, ‘I was always a lumberjack. It was hiding inside of me and just needed to come out,’ but more power to them,” says Yellin. “It has nothing to do with poo-pooing anyone. I’m just saying that things come in and out of style. Rum has sat quietly while vodka has come into style, but I happen to know that rum is coming back hugely at a level where it is coming into premium status. Everything I’ve seen has told me I’m on the right track at the right time. I think four years ago wouldn’t have been the time to do it, but now is the time.”

I don’t know about you, but when I launch into “America, the Beautiful’s” “for amber waves of grain,” I don’t picture South Carolina. The Palouse mountains of Eastern Washington and its 2.2 million acres of wheat, sure. Kansas, Iowa, any of the Bread Basket states, of course. But not Charleston.

These root dishes can’t be beet

How McCrady’s was saved from becoming a parking lot