For one Charleston couple, the American dream fits into 96 square feet 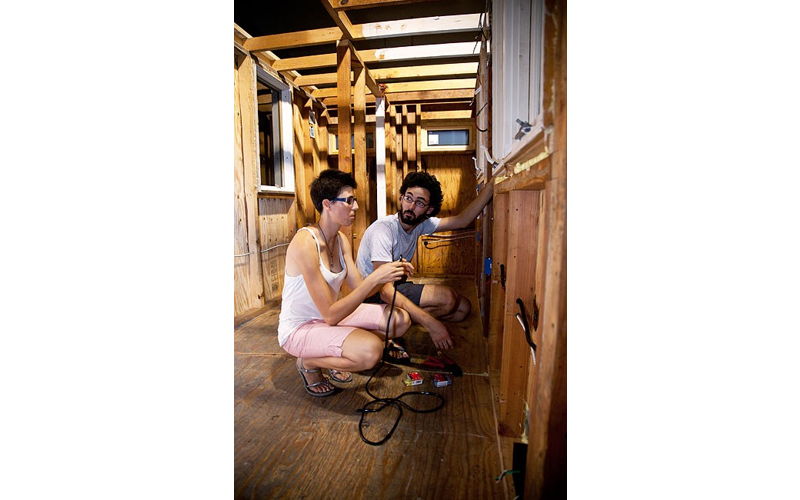 It is no secret that the Great Recession has made ghost towns of partially finished suburban housing developments, with unoccupied McMansions dotting the landscape like hulking prophets bearing witness to a singular message: Never buy more house than you can afford.

In an age of underwater refinancing and burst housing bubbles, Andrea Tremols and Cedric Baele stand on ideological ground somewhere between Depression-era thrift and Gen-Y eco-consciousness. They don’t want a spanking-new home on a cul-de-sac, they don’t want space or luxury, and they certainly don’t want to be in debt for the rest of their lives. So they’re building a 96-square-foot house.

The idea of a tiny house is nothing new, but these so-called tumbleweed houses have been popularized recently by designer Jay Shafer, who has spread the gospel of compact living on HGTV. Think Ikea on overdrive. Or submarine-style accommodations.

While Shafer makes a living selling do-it-yourself manuals and ready-made tiny houses that go for up to $55,000, Baele and Tremols are building their dream home from scratch with no instruction manual. Most days this summer, Baele could have been found at one of three places: the Charleston County Library studying electrical wiring and home construction, an old Lowcountry house or business salvaging building materials, or inside North Charleston’s Sustainable Warehouse hammering away at a house in progress on top of a pre-owned 16-foot utility trailer. He worked about eight hours a day on the project all summer, but soon he’ll be back to his fall-and-spring job leading bicycle tours in Charleston and Savannah for Vermont-based VBT Active Vacations. While he is out of town, Tremols will be teaching herself how to install insulation, hoping to have that job knocked out before Baele returns home.

“It’s a totally different relationship to your shelter, to the place where you live,” Baele says one balmy afternoon, resting on an overturned crate inside the partway-finished house. The four walls are up, and the space already feels crowded when Tremols arrives from a day’s work at the Montessori School of Mt. Pleasant, where she substitute teaches and runs a gardening program. The two are joined inside the house frame by their current roommates, Zach Thomas and Margaret Chandler, who sometimes help out with the construction while collecting materials to build a tiny house of their own. In conversation, the four regularly finish each other’s thoughts and break out laughing without an actual joke being told.

They are currently splitting rent at a house in Wagener Terrace, and Thomas estimates the final cost of his and Chandler’s project will be no more than a year’s rent.

“There is a time cost and a sanity cost,” says Chandler, “but by not contracting anything out, you save so much.”

“But you’ve got to learn how to do everything,” Thomas says.

For Tremols and Baele, who plan to have their house finished in time to wheel it through this year’s downtown Charleston and North Charleston Christmas parades, the fascination with cramped quarters began three years ago in the south of Spain. Tremols had just graduated from Clemson in a bleak-looking job market when Baele invited her to travel with him to Europe through a program called World Wide Opportunities on Organic Farms (WWOOF). In Spain, they worked on an organic olive farm at first, and the host farm put them up in yurts, Mongolian-style collapsible tent structures made of wood frames and wool.

“It was surprisingly small. And dark,” Tremols says. “But the more I was in it, the more natural it felt.”

At other farm assignments, where they grew asparagus, tomatoes, eggplants, and pomegranates, they stayed in similarly tiny living quarters, often with communal kitchens, bathrooms, and living areas. In one northern city, they slept in part of a barn that had been converted into an apartment.

“It was in a very rural setting, so it made for a nice kind of experience with the outdoors,” Baele says. “If you have a tiny space that’s outdoors, you feel more connected to your surroundings.”

Back in the States, the two started reading up on tiny houses online, particularly Jay Shafer’s well-publicized Tumbleweed houses. Once, while shopping at Malaprop’s Bookstore in Asheville, Baele spotted a copy of Shafer’s book about tiny houses and bought himself a copy. It struck a chord.

“A big part of this project is that it ties into our ideals of community,” Baele says. Back in Charleston, he and Tremols started a garden in their backyard with their roommates. And they started planning. A tiny house, they reasoned, takes less building material than a standard-size house and costs very little to heat and cool. And of course, if they bought or salvaged all the materials up front and built it themselves, there would be no rent or mortgage to pay.

What’s more, with a tiny house built on a standard 16-foot trailer bed, they can rent a truck, pick up their home, and move to the mountains for the summer, escaping hurricane season and seeking out less sweltering climes where they can live without air conditioning. In the long run, they can also figure out a work schedule that allows them to summer with friends who own farmland in North Carolina, Tennesssee, Georgia, or the South Carolina Upstate and help tend to their farms. For Tremols and Baele, migrant labor is the dream.

Once the house is completed, there will still be a few practical considerations to figure out. The pair need to be able to connect to a city water line or a well for plumbing, and they will need to find a place to plug in for electricity until they can afford solar panels. For the time being, though, they need building supplies and a workshop.

Enter Rebecca O’Brien, executive director of the nonprofit Sustainable Warehouse. Her organization, which operates out of a 120,000-square-foot former Government Exchange facility at 2650 Carner Ave., is essentially a more proactive version of a Habitat for Humanity ReStore, going out to would-be demolition sites and tearing them apart piece by piece, salvaging and reselling what’s still usable rather than sending it to a landfill. Two years ago, when O’Brien realized she would need a few extra hands to deconstruct a general store in Cross, S.C., a friend recommended that she contact Tremols and Baele, who showed up to work on a volunteer basis.

With little more than a sledgehammer and a crowbar, the crew tore down the store, and an old wall-mounted countertop they found inside went on to have a new life as the bar at Bowens Island Restaurant. (Robert Barber, owner of the restaurant, says, “We’ve got a lot of Rebecca in our building over here.”) The rest of what was still usable went into storage at the warehouse.

Soon afterward, O’Brien struck up an informal arrangement with the two: They would help out with deconstructions from time to time, and she would let them use salvaged materials and take up a corner of the cavernous storage facility with their house-in-progress. O’Brien says this is exactly the type of project she had hoped would take place in her facility. She has a number of regular clients but has gotten a few less-than-enthusiastic responses to her own work.

“Some people are just like, ‘What are you doing? Are you crazy?'” she says. “Well, yeah, I am, but this is what can happen with the crazy. It can turn into a house.”

Part of the charm of the tiny house is its amalgamation of source materials. Two windows are from a house in Awendaw. The interior siding is cypress from a house in Mt. Pleasant’s Old Village. The tin roof will be made from the excess of a house in Ravenel.

The salvage-and-build process is anything but speedy. Old buildings have to be torn down without the assistance of wrecking balls and bulldozers, and nails have to be removed from the wood with a pneumatic de-nailer. Thomas, who is still hunting down pieces and a trailer for his tiny house project, sees this as part of the charm.

“I like that. You get to know each piece as you work on it,” he says “So when it comes time to put it in your house, you’ve already spent time with that before and you know the quality of that piece.” Thomas and Chandler’s house will be a little bit larger than Tremols and Baele’s, as they own a dog and need space for an art studio. Still, it will only be 304 square feet.

If anything, the building and planning of two tiny houses has done the obvious for the four roommates: It has brought them closer together.

“That’s one of the big things for Margaret and me is that we get to put our talents together, and we have a tangible product in the end,” Thomas says. “It’ll be our house, and it’s a product of us. That’s as personal as it gets, I think.”

Every year, the Green Fair hosts an eclectic mix of acts, and this year is no exception. Veteran roots-rock band the Blue Dogs co-headline the Coastal Conservation League Main Stage alongside funk-rockers Uncle Mingo. Some of the other acts include Stained Glass Wall, Dream Merchants, the 3 Dudes, Nathan Calhoun, Introducing Fish Taco, and members of Shrimp Records.

Save some green with secondhand shopping