Footlight wraps up their LateNight Series with a bedbug conspiracy 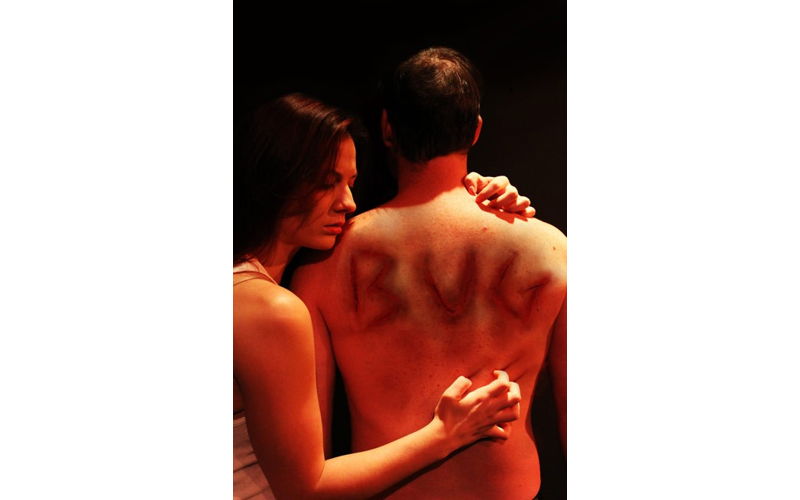 Bug is not for the faint of heart. Written by Pulitzer Prize winner Tracy Letts and led by veteran director Mary Cimino, it tells the tale of a Gulf War vet named Peter (JC Conway), who drags a young, battered woman named Agnes (Christina Leidel) down a wormhole of conspiracies, guilt, and paranoia. Not surprisingly, comparisons have been made between Bug and The X-Files, as well as the films of Quentin Tarantino.

Peter is convinced he was a victim of medical experiments during the war, leaving him with a mysterious insect infestation that results in welts and sores all over his and Agnes’ bodies. Agnes, escaping an abusive ex-husband, clings to Peter and the imagined safety of a soldier-protector-lover, despite his emerging issues.

Sound interesting? Lofty and far-reaching, perhaps? Cimino thinks so. She saw the play in New York and was surprised by her own raw, visceral reaction to Letts’s writing. When she heard Footlight planned a production of Bug this year, she lobbied to direct it.

Talking about Bug, Cimino sounds like a little kid at Christmas. “Have you seen the movie?” she asks, referencing the 2006 film starring the original Peter, Michael Shannon, of Boardwalk Empire fame.

When I say no, she laughs, almost giddy with excitement. “Good. Don’t watch it. It’s a thriller, and I want you to be surprised.”

While Cimino assumes that Tracy Letts wrote the role of Peter for Michael Shannon and his weird, quirky ways, Cimino feels every actor should be given the opportunity to interpret the role in his own way. This will always alter a production, making it stand out from the original, especially in a character-heavy piece like Bug.

Bug has a smattering of nudity and violence, blood and gore. The technical side of the production were a bit of a roadblock at times. For instance, peanut butter is sometimes used as a binder for fake blood. This is a fine practice, unless a cast member has a peanut allergy, as one Bug actor does. Luckily they found out that tidbit prior to opening night.

If you’re concerned about violence for violence’s sake or gratuitous nudity, rest assured — it all serves a purpose in Bug, Cimino says. As audiences witness Peter and Agnes’ downward spiral, there’s a reminder that while we live out cozy lives, snuggled up on couches in front of televisions, surrounded by loved ones, there are people out there like Peter and Agnes, people who have fallen through the cracks. People whom we ignore, but who desperately need our help.

Bug also exposes the darker side of love, the side of giving yourself completely to a person you hardly know. And in the case of Peter and Agnes, it all exists solely within the confining walls of a seedy old hotel room. Life and love never go well in seedy old hotel rooms, and they surely won’t in Bug.

This is that kind of show. Dark. Creepy. Austere. The audience isn’t allowed to be sure if the bug infestation about which Peter worries is real or imagined, but other, far more tangible dangers lurk outside their little room.

Cimino feels lucky to be doing this play at this time. “My actors,” she says. “They love the play, almost as much as I do.” And that makes doing it so much better. Because by the time of this writing, when rehearsals are more about the timing of a fight scene and the technical side of blood-letting, she doesn’t have to worry about providing notes on character development. Peter and Agnes are there and ready, as soon as the curtain opens on April 4.