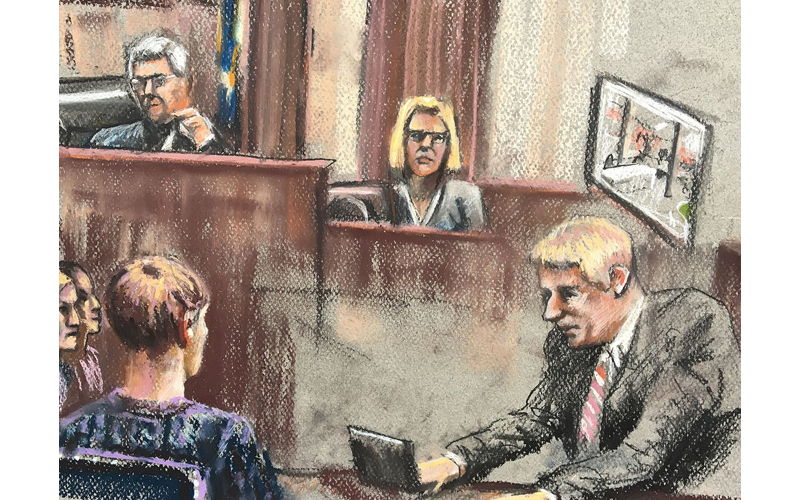 The Rev. Sharon Risher entered the courtroom two weeks ago with questions on her mind. For seven days, the daughter of Ethel Lance looked on as attorneys, experts, and witnesses combed over every detail related to the death of her mother and the eight other men and women killed in Emanuel AME Church in June 2015. During those long days in court, she heard many things for the first time. It was in that courtroom that she first saw the videotaped confession of her mother’s killer, Dylann Roof. It was while she listened to the medical examiner’s report that Risher says she felt the six shots that claimed her mother’s life. It was also in that chilly courtroom, surrounded by the families of the other victims, that Risher learned that it was her mother’s phone that survivor Polly Sheppard used to call 911 on the night of the shooting.

“Seeing all that in court, it just brought it full circle, I suppose. It answered a lot of questions,” Risher says.

Risher describes her mother as a woman who didn’t want to be seen, someone who was always in the background, making sure things were right. Now the world knows Ethel Lance, and Risher has the answers to her questions.

“I think I have all the answers I need to settle my heart,” says Risher. “I know what was going on. I knew what they were doing. I’m at piece I think with questions now. I think the questions have been kind of answered.”

But after the new year begins, Risher and the family members of the other victims who lost their lives at Mother Emanuel will return to a federal courthouse as the trial of Dylann Roof enters its final phase. Having found Roof guilty on all 33 counts of his federal indictment, the same jurors will be tasked with determining his sentence. Roof will either spend the remainder of his life in prison without the possibility of release or pay for his crimes with his life. Risher hopes that Roof’s punishment will send a message to others that hatred directed toward those of different races, religions, and ethnicities will not be tolerated.

As Roof’s federal trial was underway, U.S. Attorney General Loretta Lynch discussed the Justice Department’s ongoing efforts to combat hate crimes during an interfaith gathering in Reston, Va. Citing the most recent statistics released by the FBI, Lynch stated that the number of reported hate crimes in the country had increased by 6 percent since 2014, including crimes committed against Jewish Americans, African Americans, and LGBTQ Americans. These numbers include a 67 percent increase in hate crimes committed against Muslim Americans — the highest total since 2001, when the 9/11 attacks led to a dramatic rise in anti-Muslim attacks.

“These incidents — and these statistics — should be of the deepest concern to every American. Because hate crimes don’t just target individuals. They tear at the fabric of our communities, and they also stain our dearest ideals and our nation’s very soul,” Lynch said. “There is a pernicious thread that connects the act of violence against a woman wearing a hijab to the assault on a transgender man to the tragic deaths of nine innocent African Americans during a Bible study at Mother Emanuel AME in Charleston, S.C.”

Found guilty on more than 20 hate crime charges, Roof faces the possibility of execution for his crimes at Mother Emanuel. And although Sharon Risher doesn’t support the death penalty, she understands that the fate of her mother’s killer does not rest in her hands.

“That’s not my decision. I can feel whatever I want to feel because that’s not on me,” she says. “And whatever the judicial system decides to do with him, I pray he gets the sentence that he should get, whether that be death or to spend the rest of his life in jail.”

Moments after the jury handed down a guilty verdict, Roof reaffirmed his decision to represent himself during the sentencing phase of the trial. If he still insists upon serving as his own attorney when the trial resumes on Jan. 3, 2017, Roof’s defense team will be forced to sit by as the 22-year-old high school dropout attempts to navigate the remaining days of his trial. Roof will have until the opening of the next phase of the trial to change his mind.

Over the weekend, Roof issued a handwritten note to U.S. District Judge Richard Gergel regarding his plans to represent himself.

David Bruck, the man who served as Roof’s lead defense attorney during the first phase of his federal trial, is no stranger to high profile cases. In the past, he has served as legal counsel for Susan Smith, the South Carolina woman convicted in 1995 for drowning her children, and Boston Marathon bomber Dzhokhar Tsarnaev, Bruck’s willingness to represent even the most reviled defendants appears to stem from his staunch opposition to the death penalty. During opening statements in Roof’s trial, Bruck acknowledged his client’s guilt, but told the jury that executing Roof would only reduce society to the level of a killer. No matter how unpopular, this is a long-held position for the attorney.

“What really fuels the death penalty is the justifiable frustration and rage of people who see that the government is not coping with violent crime. So what if the death penalty doesn’t work? At least it gives us the satisfaction of knowing that we got one or two of the sons of bitches,” Bruck wrote in 1985. “Perhaps we want retribution on the flesh and bone of a handful of convicted murders so badly that we’re willing to close our eyes to all of the demoralization and dangers that come with it. A lot of politicians think so, and they may be right. But if they are, then let’s at least look honestly at what we’re doing. This lottery of death both comes from and encourages an attitude toward human life that is not reverent, but reckless.”

But as the families of Dylann Roof’s victims await the killer’s ultimate fate, Sharon Risher hopes that justice is served, no matter what the sentence.

“If he spends the rest of his life in jail, I pray those nine angels visit him every night,” she says. “Maybe one day, he’ll call on the Lord Jesus. Maybe he’ll ask for mercy.”