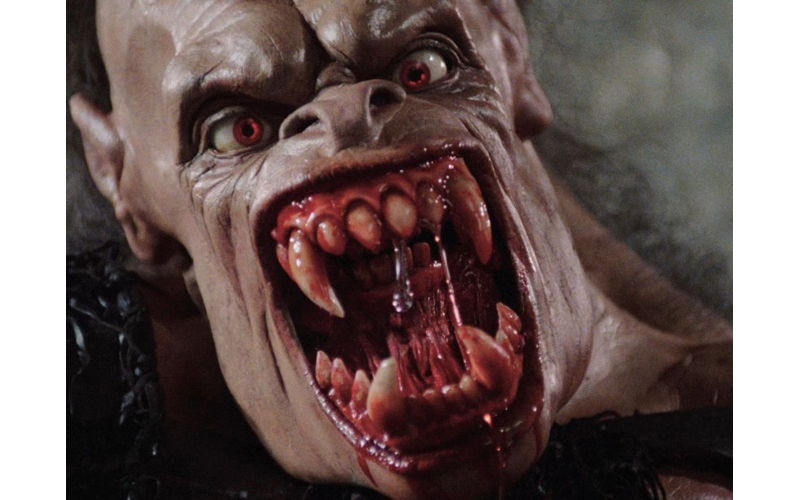 The pandemic opened the on-demand streaming floodgates for plenty of movie-goers, and we’re not sure how long it will be before we’re all packed back into theaters. In last week’s column, I mentioned some old favorites playing on the big screen in the Lowcountry. This go around, I wanted to mention a few horrific flicks visiting that are currently streaming, for Halloween fanatics who want to stay indoors this year. Here are five spoopy movies that are either horror or horror-adjacent that I recommend.

I recently rewatched a Clive Barker film from 1987 that I hadn’t seen since I was in middle school. It was a hell-raising film that expertly melded sacrilege, sexual pleasure, gore and leather, and was none other than … Rawhead Rex. This film was released the same year as Hellraiser, Barker’s classic directorial debut, but involves a big pagan monster going on a bloody rampage through a small Irish town. The hulking, mohawked creature, described in Barker’s book as a 9-foot-tall walking phallus with a lot of teeth and a face like raw meat, is cool in a way that only 12-year-old horror nerds would appreciate. In retrospect, it may have been kind of stupid. Moments of sheer terror feel pretty silly when Mr. Rex looks like he’s stricken with severe lockjaw. But, at the end of the day, it’s a goofy monster movie that made me forget 2020 for 90 minutes. I’ll take it. Available on Vudu.

Speaking of movies that took my mind off 2020, Uncle Peckerhead is up next. There’s a long line of horror-comedies that successfully combine scares and laughs with heart. This scrappy, low-budget beast written, directed, edited and co-produced by Matthew John Lawrence, hovers near films like Shaun of the Dead. The plot is simple: punk band DUH embarks on a tour, but little do they know that their new roadie, the titular character (David Littleton) digs human flesh. Fountains of bloody splatstick ensues. This 2020 film is fun and endearing in it’s own gory little way. If there was ever a cult movie in the making, Uncle Peckerhead is it. Available on YouTube.

Yikes. I knew nothing about Derrick Borte’s 2020 movie Unhinged except that Russell Crowe looked beefier and that revenge was involved. I didn’t know it was a nasty grindhouse throwback about a wackjob that terrorizes a woman (Caren Pistorius) who cut him off in traffic. To be fair, the main character’s driver etiquette made me have fleeting empathy for Crowe’s character until I reminded myself that he murdered two people in the opening scene. From the exhaustingly tense opening montage of chaotic videos to it’s gory finale, I was hooked on this over-the-top suburban nightmare. That said, please bear in mind that Unhinged is trash. Gloriously dumb trash in 2020 feels like the offspring of Duel, Falling Down and Joyride. I’m guessing the film is trying to have a message of sorts? The only message I could glom from it was, “Don’t drive like an asshole.” Available on Google Play.

Charlie Kaufman’s 2020 film likely qualifies as horror-adjacent since the scares are from the overwhelming strangeness akin to one of the headier episodes of The Twilight Zone. A young woman (Jessie Buckley) and her boyfriend (Jesse Plemons) take a trip to meet his parents. Things start off uncomfortable and devolve into absurdity. The lapses of suffocating melancholy are buttressed by moments of sheer “Wait, what did I just see?” strangeness. After watching it the first time, I was bowled over by it, wanting to watch it again to see all the hints that I missed. Understandably, some may be turned off by the film’s downbeat and wonky vibe but for those that enjoyed Kaufman’s directorial and written works, Synecdoche, New York and Being John Malcovich, his latest is rewarding. Available on Netflix.

Justin Decloux’s inspired micro-budget film Impossible Horror exists somewhere between the dour headiness of I’m Thinking of Ending Things and the breezy simplicity of Uncle Peckerhead. I don’t know exactly how to describe this film outside of the plot. I thought it would be a simple and horrific allegory about an aspiring filmmaker (Haley Walker) unable to let go of a past relationship and battling a creative block. Then she hears a scream. Pretty soon, she and another woman (Creedence Wright) try to find the source of the scream. It just gets weirder from there. It’s a horror film through and through for sure. There is creeping dread and there are some disturbing visuals but what was most refreshing about Impossible Horror was the quirky style and the unexpected, rewarding turns it takes. Available on Amazon Prime Video.