First look: Righteous Gemstones brings schlongs, saving, and a little bit of heart to a TV near you 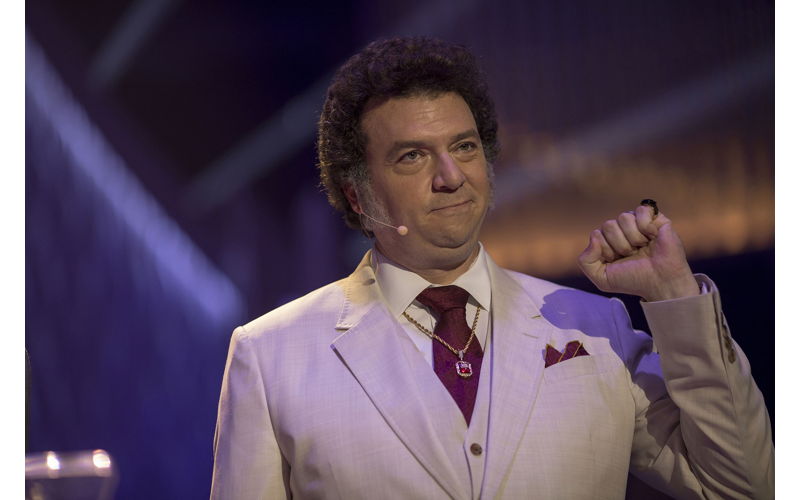 Maybe it’s a coincidence that I was watching Jim Wynorski’s cult classic Chopping Mall on TV which got me thinking about my old teenage haunt, Citadel Mall and how, as a maladjusted teen, I thought it’d be awesome if Wynorski’s film about killer security bots had taken place at Citadel Mall.

Fast forward to today, the section of Citadel Mall where the once-mighty Sears department store existed was recently transformed into the Gemstone Prayer Center — one of many locations pressed into service for HBO’s new show, The Righteous Gemstones, which debuts this Sun. Aug. 18 at 10 p.m.

As luck would have it, while watching the head of one unlucky ’80s teen explode from crazy killbots, I got a message that Rough House Productions, the studio behind Gemstones, was going to hold an early screening of the show’s first episode at the Terrace Theater with “Jesse Gemstone,” aka Danny McBride, in attendance to intro the show.

Proceeds from the premiere would benefit Charleston Waterkeeper, an organization whose mission is to protect, promote, and restore the quality of Charleston’s waterways.

For those locals who have been living under a rock (or gemstone wocka wocka wocka), the show follows a world-famous televangelist family with a long tradition of deviance, greed, and charitable work. If Rough House’s past HBO work Vice Principals and Eastbound and Down are any indication, there would be prickly characters eliciting laughter thanks to familiar folks like McBride, John Goodman, Edi Patterson, Adam Devine, and Jennifer Nettles. According to my notes (what I read on IMDB) the always-reliable Walton Goggins will be making an appearance at some point.

Apparently, after the announcement, tickets to the event sold out in less than a day.

Upon arrival, you could hear all kinds of convo while waiting in line.

Some people were talking about their own possible cameos in the show while others talked about their house being used as a filming locations. It was while standing in line that I realized I had left my pen and scribble pad so I could make barely-legible notes about what I was watching in a dark theater. Probably for the best. I could just make stray observations first thing when I get in my car.

Once McBride made a brief intro about the episode he wrote and directed, he gave Charleston Waterkeeper a shout. With that, the house lights dimmed and the show began. The first thing of note for me was simply the intro. Maybe they do it for other shows but I don’t have HBO and I haven’t seen it in a long time. The intro to the show was not the usual television fuzz and glow, but was instead the sweeping mid-’80s intro that usually was usually reserved for HBO’s feature presentations. That was a nice little surprise.

The episode begins with a throng of people in China being saved by the Gemstone family. Being saved entails the parishioners being baptized in a huge wave pool with sirens and flashing lights going off at an inopportune time. The family’s two male siblings, Jesse (McBride) and Kelvin (Devine) do the ceremonial dunking while the father, Eli (Goodman) gives blessings and his daughter (Patterson) is relegated to a thankless role in the background.

Not long after the baptism of 5,000 people,  Jesse receives a video message that shows him snorting a hill of blow while some naked randos frolic in the background. Needless to say, this sends Jesse into pants-pooping panic mode. After a brief meeting in what appears to be a North Charleston parking lot, he makes it his mission to get a million dollars to keep the video from going public.

Meanwhile, Kelvin returns to a home adorned with a couple movie posters for TimeCop and Chuck Norris’ The Octagon, a Double Dragon arcade game, and an ambiguous friendship with a former satanist, Keefe (Tony Cavalero).

Judy returns to a quiet relationship of living in sin with her fiance (Tim Baltz). Given the family’s ministry bears a lot of similarity to mega-church ministries like Joel Osteen and Creflo Dollar, it’s safe to ponder the family’s sincerity when it comes to the religious views they espouse. Especially when you consider the money they pull in from donations and their threats to some of the smaller churches in the town of Locust Grove.

Here are those stray observations:

What was fun about the show, aside from the solid performances by the cast,  were the momentary allusions to mafia flicks (via gangster-adjacent footage of money being collected and slo-motion entries into a Charleston restaurant) and westerns (via a “this town ain’t big enough for the two of us” confrontation between the Gemstones and another pastor played by Dermot Mulroney). Then again, I could just be over-analyzing like most armchair directors.  [content-2] I was caught off guard by a surprisingly wistful moment in the show. In one scene, a previously bellicose character exhibits a bit of humanity as they watch an old VHS with old memories. That was a nice curveball.

This is kind of random, but one thing that I’ve always been a fan of with Rough House Productions shows is their music selections. They always complement the action well, lending gravity or levity to whatever is going on. As a result, I usually find myself consulting random sites to find what infectious track was featured in past shows — MC5’s “Miss X” featured in Eastbound and Down is a particular fave. Based on what I heard in this episode, things haven’t changed.

Hopefully I’ll articulate this correctly, but upon leaving the theater, I was fleetingly reminded of movies like Silence and First Reformed. Though those films are much more serious than anything I saw in Gemstones, they all seem to carry a similar theme. At face value, they are usually written off as attacks on religion and faith. Maybe it’s rose-colored glasses, but I don’t see it as such. If anything, The Righteous Gemstones gives us another example of a) how faith  — or lack thereof — is not simple and b) that a story castigating those who take advantage of a personal thing like faith is not tantamount to disrespect.

But I could be overanalyzing again, considering my favorite scene at the screening involved a character getting angsty while the image of a dude’s schlong was intermittently blanketing his face.