Superhero Facade: Rourke's wrestler is tragic beneath his bottle-blond toughness 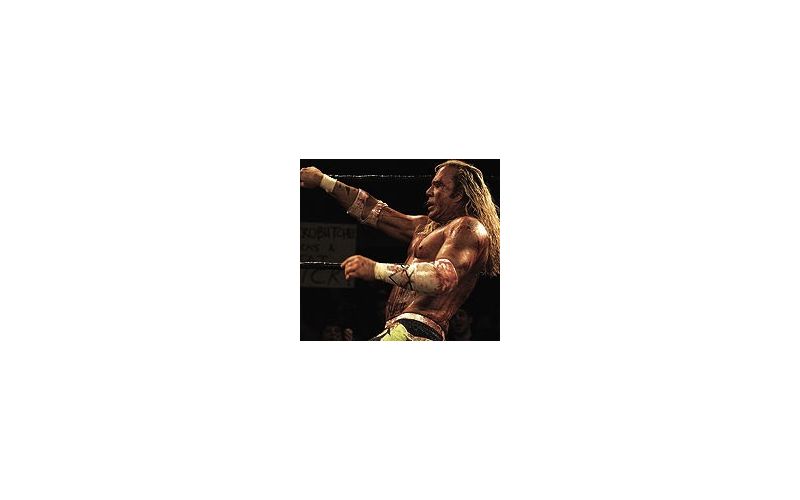 Randy “The Ram” Robinson has seen better days. A 1980s professional wrestler with a loyal following, Randy is entering his twilight years sporting a hearing aid, reading glasses, a bad back, and a burgeoning heart condition. The Wrestler is an astounding portrait of a broken man, but also an exhumation of dead style, the cartoonish Mötley Crüe sexuality that defines Randy’s out-of-touch worldview.

American culture has never been kind to those who live in the past, but the film’s triumph is never mocking Randy’s status as an ’80s relic. Instead director Darren Aronofsky sees the poignance in clinging to a once potent, but rapidly fading vision of oneself.

In the ring, Randy still plays the iconic golden boy for all he’s worth, with his Hulk Hogan musculature, platinum waterfall of hair, and an orange, spray-on-tan hue. A masculine archetype on steroids (literally), Randy’s overinflated beach-boy bravado in the ring hides a host of small tragedies.

Randy has lost contact with his only child, Stephanie (Evan Rachel Wood), his grocery store boss is a Napoleonic bully, and Randy sleeps in his van when his landlord locks him out of his trailer. In a culture obsessed with the rise-to-the-top sports drama, The Wrestler is a sinking-to-the-bottom yarn, about what happens to bodies battered on the job and the painful reckoning of one’s own obsolescence when your time in the limelight begins to dwindle.

Aronofsky’s Requiem for a Dream tended toward a sensationalism that milked human misery and crafted it into a spectacle of utter abjection and pain. He has often specialized in exhuming the lowest depths of human suffering via the most telegraphed means possible. But The Wrestler is existential suffering of a different order. It is also Aronofsky’s most mature and thoughtful film to date.

Instead of imagining the lower economic rungs of society where Randy dwells as a festering hellhole, The Wrestler paints Randy’s milieu of wrestlers and promoters, strippers and trailer park denizens as a warm and welcoming one. Rather than a pit to scramble out of, Randy’s working-class dead end is a place to lay his weary head. The Wrestler is astonishingly snark-free, especially considering screenwriter Robert Siegel’s origins as an editor at the battery-acid comedy paper The Onion. Rejecting cartoonish portraits, Siegel instead finds a world of gentle bonhomie, respect, conviviality, and companionship among Randy and his fellow grapplers. Siegel shows a tenderness in their relationships that looks beneath the facade of chest-beating hyper-masculinity. And his flaying of pumping-iron stereotypes is as deft as his treatment of stripper Cassidy (Marisa Tomei), an aging dancer who resists involvement with customer Randy. The Wrestler peeks beneath her hyper-feminine exterior to show the tragic undertones of relying on youth and beauty for survival.

Part of The Wrestler‘s enormous appeal lies in Siegel’s parallel treatment of Randy and Cassidy, as their respective macho and vixen charms fail them. Just as Randy grapples with an unclear future, a body that is no longer holding up under a punishing litany of staple guns, barbed wire, stage dives, and steroids, his female twin Cassidy finds herself unsuccessfully trolling for lap dances at the squalid Jersey strip club Cheeks, rebuffed by customers who declare her too old and sexually unappealing.

Both Randy and Cassidy seem trapped within their archetypal roles: Cassidy the healer, the listener who absorbs Randy’s troubles; and Randy the warrior whose invincible exterior is beginning to crack.

Not just a bell jar piece about the esoteric world of professional wrestling, The Wrestler seems tailor-made for these hard economic times. It’s an uncommon tale of old age and dwindling opportunities. Who can’t at some point in their lives relate to the idea that the best days may be in the past?

Randy’s emotional impact and lovability owe much to Mickey Rourke, 56, who has often hinted at a tragic sensitivity beneath his pretty boys and tough guys. Rourke’s bashed and rearranged face, twisted by his own hard living and plastic surgery, has left him with a kind of sad humanoid mask, a fighter’s exterior that occasionally crumbles with disappointment and pain. His poignant, brilliantly nuanced Randy has a hard body and a soft heart, playing Nintendo with the kids in his trailer park, fumbling to reconnect with his grown daughter Stephanie, and exhibiting an affection for people that extends from the wrestling locker room to the deli counter where he works.

He’s a crowd pleaser, a man anxious to sacrifice a little of himself in the interest of showing others a good time. A consummate showman, he’s given the fans his best, but he’s the one who looks shocked when his superhero facade falls apart.