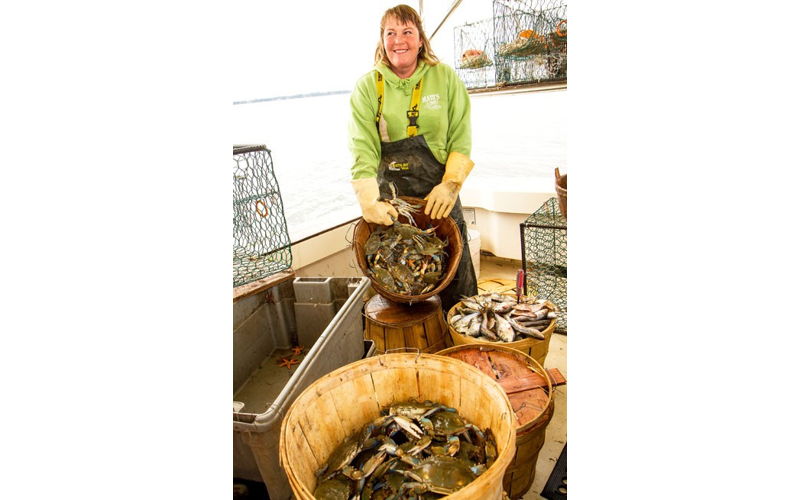 Kimberly Carroll wakes up in the middle of the night thinking about crabs. During the day, golden crustaceans hang from her earlobes and around her neck. Their silhouettes appear on most of the shirts she wears to work, checking her 220 traps around Charleston Harbor. Demonstrate a bit of interest in her obsession, and she’ll eagerly show off pictures of blue crabs on her iPhone like they’re her grandchildren or a favorite pet.

“There are hotels, whales, jumbos, and colossals,” she says of the grading scale. “Altogether I call them ‘the lovelies.'”

Carroll and her husband Captain Bobby operate Kimberly’s Crabs, a small business with a far-reaching impact on the Lowcountry culinary scene. After closing their Shem Creek retail stand, Raul’s Seafood, in 2010, they decided to go all-in with crabs. “We lost our lease, so we decided we’d just go crabbing,” says a grinning Carroll. Giving up the shrimp and fish trade for a niche market has worked out, thanks in large part to the support of chefs like Sean Brock and Mike Lata. Carroll says (with all seriousness) that during the spring-to-fall soft-shell season, Lata’s first phone call each morning is to check her supply.

“Before he even has a cup of coffee he calls me,” she exclaims. “I make sure I’m extra pleasant because I’m the first voice he hears after the alarm clock goes off.”

The fresh daily stock of Kimberly’s Crabs helps Lata’s restaurant, FIG, maintain its reputation as one of the finest purveyors of soft-shell crabs anywhere. When the ocean begins to warm in the spring, blue crabs get frisky, moving about and looking to mate. They also grow very rapidly via a process called molting. By shedding their hard shell, their body underneath can expand, sometimes by as much as 50 percent in a few hours.

Blue crabs are fragile after molting. To ship them, it’s necessary to let them begin to form a leatherback, the first stages of a new shell. That can occur within an hour or two of the molt, and with it comes a subtle loss of flavor and texture quality. Kimberly watches for “red hots,” the term she uses for the fiery crimson lines that appear on a blue crab’s back set of legs just before they pop their shell off.

Lata and the Carrolls worked together to find the precise moment after molting that a soft-shell crab should be pulled, placed on wax paper, and covered with paper towels for a quick delivery to Charleston’s top chefs.

To harvest soft-shell blues (or “butters,” as Kimberly calls them), Bobby built an impressive “shedder,” a building with two levels of wrap-around tanks for 2,000 crabs. The couple takes shifts each night from April to October, checking the crabs every three hours and pulling the soft-shelled recent molts for delivery in the morning. The result of their effort is what Lata emphatically touts as the best soft-shell crab in the world.

“It’s a treasure. I can say, ‘Yeah, New York City. You can buy whatever you want from wherever the hell you want it, and take all the technique in the world, but you can’t get a better soft-shell crab than you can right here,'” he exclaims. “I know firsthand what it feels like the second that shell comes off, and I don’t think many chefs outside of Charleston know that.”

Seafood purveyors like Kimberly’s Crabs have shifted the paradigm of freshness. If a fisherman catches a swordfish, returns to the dock the following day, weighs and sorts his catch, and then sells it to a distributor who drops it off at a restaurant, it’s still at least a few days between coming out of the water and winding up on a plate. Crabs, in particular, are usually steamed on the boat or immediately upon returning to land, taking the initial cooking process out of a chef’s hands.

“There’s been a disconnect between our proximity to the ocean and how long it takes a fish to hit our table,” says Lata. “Then here comes Kimberly, who is like, ‘How many pounds do you want? I’m looking at 15 and can maybe get 20 if I check the other traps.’ She’s on the water when she calls, and an hour later she’s at the back door with a sack of crabs. It doesn’t get any better than that, and that is a specific thing to Charleston that you can’t get anywhere else.”

If Lata could watch his customers’ faces as they fork a first bite of fluffy crab meat onto their tongue, he’d see expressions of joy and amazed bewilderment. Stone crab claw and soft-shell blues are often served cocktail-style at FIG, perhaps with a warm vinaigrette, raw shallots, or a squeeze of lemon juice. It’s the polar opposite of the over-baked dips and mass-produced cakes found on menus across the country.

“These crabs are an achievement that cannot be forced, only coaxed and embraced, so why would you want to fry or batter that crab?” asks Lata. “We kiss it in the pan until it’s just cooked enough, then put it on the plate with just enough to make it a little more composed. When you have that crab for the first time, whether you can articulate it or not on the spot, you’ll recognize immediately that there’s something special about it, and you’ll wake up the next day going, ‘Goddamn, that was unbelievable.'”

When the water cools off, Kimberly and Bobby follow the crabs into the deeper waters of the harbor. The hard shell blues they pull in winter form the base for a rotating array of dishes at FIG, including a blue crab primavera. Lata builds a court-boullion with white and green onions, carrots, tarragon, and parsley before boiling whole crabs for about 10 minutes. After a bushel has made their way through the broth, it’s cooked down and concentrated, eventually pairing with heavy cream to form a rich but light sauce, finessed over two days. Poured over homemade taglioline noodles, seasonal vegetables like hedgehog mushrooms and arrowleaf spinach, and then topped with the crab’s luscious meat, the bliss-inducing sauce demands multiple dips from the bread basket before the plate is cleared.

Kimberly left a career in radiology at Roper Hospital for the seafood business, a decision she’s never regretted.

“I know I’m a crabber and all that, but we take a lot of pride in our business,” she says. “It makes me feel good to be included in what’s happening in this town.”

Her idea of the perfect soft-shell crab involves a frying pan, a potato roll, Duke’s mayonnaise, and a fresh tomato. Regardless of how they’re prepared, she stands by the claim that hers are the best soft-shell crabs in the world.

“How could they be better?” asks Lata. “When they’re done well, they’re transformative. Unless you have the same experience, but you’re sitting on a beach in the Caribbean with a swimsuit model and drinking Coronas, that would be better, probably. But that’s about it.”