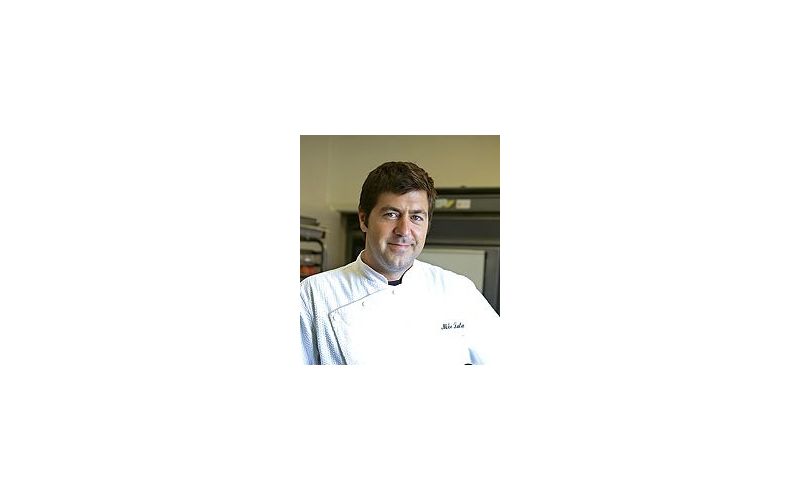 When Weston opens the door to FIG at 8 a.m., the produce truck is already waiting. He is followed by Anne and Ashley, who begin to brew coffee and turn on the ovens. They pull in the mats, ready their work stations, fold hand towels, and don their aprons. They study the prep lists and look over the kitchen journal entry from the night before.

Ashley reads aloud to Weston, “Chef prefers the cantaloupe to the Galia melons … see if Rita has more.” Soon Weston and the driver are fastidiously picking through the produce order, wondering why we received Peruvian asparagus when we were promised local. He calls, only to find out the local asparagus didn’t survive the heat, and he sends back the Peruvian. He grabs last night’s menu and runs over “potato agnolotti with lump crab, asparagus, and garden carrots” with a yellow highlighter, the first of many notes he will make while receiving today. By this time, Anne is sorting through the peaches for poaching and Ashley is elbows-deep trying to organize today’s deliveries in our small reach-in coolers.

By the time I arrive around 10 a.m., I have already been briefed about the lack of asparagus, the abundance of Kimberly’s stone crab available, and the few pounds of black bass I was able to talk Mark out of selling to another chef, swearing, “He’ll never know, Mark, I promise.” Then Celeste calls to tell me she has my favorite Romanesco zucchini, and I start thinking about a replacement for the asparagus. As Andy, my p.m. sous chef, walks in the back door — at 10:30 a.m. — I put my hand over the phone and shout to him, “Call Chris to see if he has any more of those squash blossoms,” as if I’m brokering some big stock trade. Soon after, we are all sitting in the dining room with menus in hand, making corrections and rewriting lists for the first version of tonight’s menu. It’s a process they insist on being a part of in order to ensure that my ambitions won’t derail the kitchen with too much work for the line cooks to execute during service.

As the afternoon fades and we move closer to service, our assistant manager, Cacky, starts to bug me about the printing of tonight’s menu, rightfully so. Pre-service line-up starts at 4:45 p.m., and it’s already 4 p.m. She will have to research terms, correct my spelling of ingredients, and whatever else I throw at her. I am only hesitating because Celeste hasn’t shown up with the zucchini, an ingredient now in to two dishes. If she comes after service starts, we are left with no choice but to shelve the agnolotti or run down to the Harris Teeter and hope they have those little ones from North Carolina that are actually pretty good. But Celeste has assured me that she will be here on time so I decide to gamble — which I have sworn off a thousand times — and put it on the menu to submit.

At line-up, I quickly go over every dish on the menu and then open it up to Q&A. “OK. Yesterday’s chilled Galia melon soup is now cantaloupe — same process, just a different melon. In my opinion, Rita’s cantaloupe just has more going on and the texture is silkier. I have also changed the agnolotti set. Instead of the asparagus and carrots, we will substitute shaved Romanesco zucchini and wilted squash blossoms.”

The servers jot down notes about who grew what and probe further into my cooking methods for a particular dish.

“Also, we were brought a limited number of black bass today that I just had to have. What we will do, instead of printing it, is hand-sell them to our regulars for $28. Make sure you tell Jack when he comes in! I have 12 orders all day. Thanks and have a good service.”

The dining room quickly starts to fill up; there must be a performance of some kind tonight. The first tables start to arrive, and I can hear the servers describing and recommending the food as though they had cooked it themselves. Meanwhile, Adam and I are having an espresso at the bar trying to figure out where we are going to fit the 12-top that I never should have booked, when I hear someone whisper “Tell chef Celeste is here!”

Summertime in Charleston can be a sticky, shirt-soaked ordeal — even for the most suntanned locals. Fortunately, the warm weather ushers a great surge of seasonal beers into our favorite pubs and restaurants.

In search of the Holy City’s best burgers

The Mellings grow beautiful things at the hydroponic Kurios Farms