Few women have been elected to represent South Carolinians, could Lindsey Graham, of all people, change that? 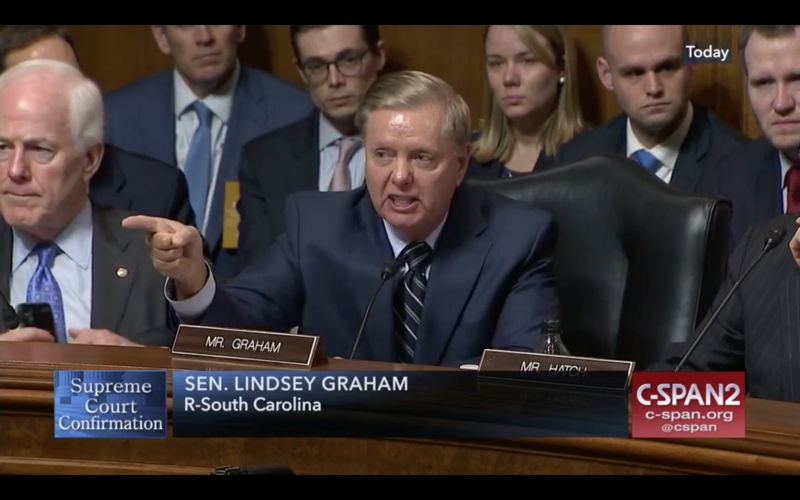 From the elevated dais in the Senate hearing room on Sept. 29, U.S. Sen. Lindsey Graham said that as a “single, white male from South Carolina … I will not shut up, if that’s OK.” Later in the day, President Donald Trump said, “it’s a very scary time for young men in America” living with the specter of phony sexual assault allegations against them.

A week later, tossing aside detailed, emotional accusations of sexual assault against Judge Brett Kavanaugh, the blustering defense mounted by Graham and the nominee himself, and a cursory partisan investigation, senators voted to confirm a new Supreme Court justice.

As the “Year of the Woman” winds to a close, could an angry, self-appointed spokesman for white men from the South dismissing a sexual assault victim be a catalyst for electoral parity in a state that’s 51.5 percent female?

All nine South Carolinians elected to represent the state in Washington, D.C. are men. In the S.C. General Assembly, we’re represented by 143 men and 27 women — less than 16 percent, tied for seventh lowest in the nation according to Rutgers University. Just four of the 46 members of the state Senate are female. Congress doesn’t rate much better, with just 20 percent of its 435 members being women, about three-quarters of them Democrats.

On the state level, this year’s midterm election likely won’t change that much. Of 171 major party candidates on ballots for state House, about 40 are women. Of 19 candidates for Congress, only two are women — a single Republican and a single Democrat. And though women appear on both tickets for the new joint ballot for governor and lieutenant governor, neither are running for the state’s top job. Of the state’s six other constitutional officers (attorney general, etc.) just three candidates from either major party are women.

But even knowing the numbers, for groups already working to clear the path for women running for office, Graham’s words have loomed large.

“I think we’re ready to see him get a really good challenge, and we’d love to see that be a woman,” says Christina Reynolds, vice president of Emily’s List, a group that helps pro-choice Democratic women get elected across the country.

“Lindsey Graham has been dismissive of what women have had to say and I think he’s standing in the wrong place here. And we look forward to seeing women take his seat for it,” says Reynolds.

Emily’s List endorses candidates for office at all levels, but has not backed anyone in South Carolina for the November election. Reynolds describes the group’s approach as strategic, targeting states where an electoral win could change the balance of power or affect critical redistricting efforts.

“We’re constantly looking at different races, but we’re still in the process of expanding out, certainly at the state and local level.”

Susan B. Anthony List, the pro-life, Republican counterpart to Emily’s List, has backed state Rep. Katie Arrington to be the first Republican woman ever elected to Congress from South Carolina, citing her anti-abortion policy position. (The last woman sent to Washington by South Carolinians was Liz Patterson, an Upstate Democrat first elected in 1986 who served three terms before she was defeated by Republican Bob Inglis.)

“There are some women that I think, may be exploring if this is the right seat for them who may have had plans to run, but with everything that has happened and with his conduct the last two weeks, [they are] realizing that we do need a strong female candidate to run against him in 2020.”

But regardless of whether more women consider running specifically because of Graham, the effect may still be felt at the polls, says Lisa Dabney, executive director at the Center for Women.

In 2016, women made up about 56 percent of the total votes locally and statewide, with nearly 24,000 more women casting ballots in Charleston County than men.

But Watson wants to make sure that the momentum doesn’t get lost when the final “Year of the Woman” calendar page is torn off. “I hope that with the excitement around the Year of the Woman we don’t lose the fact that these are women who have worked in their communities for years. These are women who are running really great campaigns and have really great ideas for how to make their communities better.”