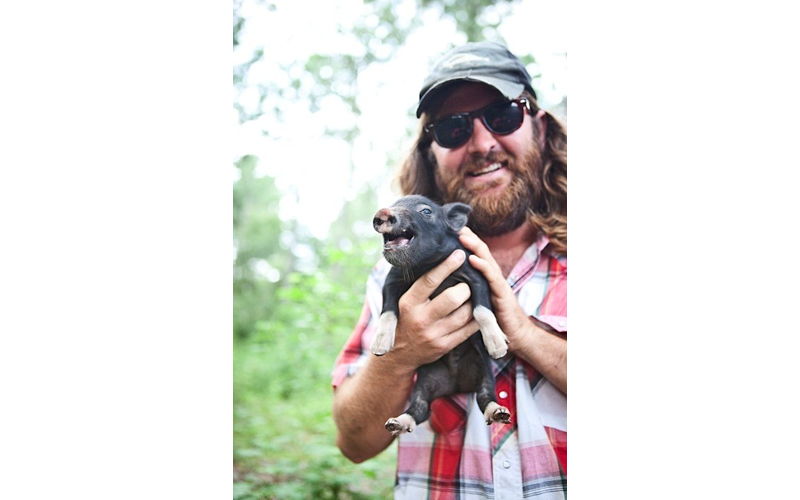 Tank Jackson and I met up on a Saturday afternoon at Zia Taqueria. We had come to talk about pigs. I was looking for my first ones, a new acquisition for my farm south of town. I thought I’d write a story about it. Tank was selling, because Tank is always selling. He used to sell used cars, now he sells pigs through his Holy City Hogs outfit. He once started a limousine company with two stretch vehicles outfitted with cow horns on the front. We knew each other for barely three minutes before he sold me on the idea that our beers would be better if chased with a shot of tequila.

After 10 minutes I learned that Tank Jackson isn’t his real name. He adopted the moniker from his dog after using it as a pseudonym on Facebook, and without his considerable charm and gregarious nature, I may have declined the invitation to climb into the cab of his truck and drive into the interior reaches of Johns Island, to the secret plot of land where he kept his pigs.

But Tank knows swine, and with his full beard, long hair, and trucker hat, he fits the part. His collection of old school pork is unequaled in the region — his list reads like a heritage-breed dossier: Mulefoot, Berkshire, Tamworth, Guinea Hog, Duroc, Hampshire, Gloucester Old Spot, Mangalitsa. He likes to keep them well guarded, lest someone steal off with a fine porker in the dead of night.

“What about Ossabaw Island pigs?” I asked, thinking of the very rare pigs left off the coast of Georgia by Spanish explorers in the 1500s. He waved me off, “Nah, George and Celeste Albers raise Ossabaws, and I wouldn’t want to cut in on them.” Tank Jackson is also a man of honor. He’s a south Georgia boy with a predilection for getting up at the crack of dawn to raise Charleston’s most innovative pork.

As we careened over mud banks and drainage ditches on the way to see some pigs, he described his vision for Holy City Hogs. “This is an excursion in flavor,” he proclaimed. “I’m on a search for the tastiest piece of pork known to man.” As Tank sees it, the country is just waiting for his brand of “designer pork,” where the customer determines the breeds, feeds, and finishes of the hog, preferably over the internet. So he’s a collector of genetics, and the genetics of his hogs are special.

“That there’s Mia Ham,” he shouted as we bounded through the woods toward a makeshift pen. It was a ring of horse fencing cobbled together with an old tarp stretched overhead between pine trees. Mia Ham is a Mulefoot and Berkshire crossbred pig weighing over 300 pounds. She laid languidly under the tarp, her teats covered with piglets in a rather unceremonious mud hole. “I knocked her up this time with Kevin Bacon,” Tank told me as he led me over to see his prized boar, a purebred American Mulefoot. “I got Mangalitsas coming in next week. That pen there has the Old Spots; these over here are Tamworths getting ready to go to the butcher.”

“Have you sold any pigs to restaurants yet?” I asked. “No, not yet,” he replied, “just to friends and neighbors.”

Tank got into the pig business in Los Angeles. His friend and business partner, Stevan Tuck, introduced him to a Mangalitsa pork chop, and the business was born.

“The flavor was an overload, and we decided right there that we would destroy ‘the other white meat’ … we want the most flavorful meat,” he told me. “The Chinese are buying up the factory pork producers, and people are going to get wise to what they’re eating.”

He’s also wise to what the pigs are eating. He uses no commercial feed. Instead, he stops by Normandy Farms bakery in West Ashley and Robert Fields Farm on Johns Island several times a week to harvest stale bread and overripe vegetables for his herd. He supplements with grain but eschews both “organic” protocols and conventional medicated feeds.

As we headed back out through the mud and away from the secret piggery, he explained, “We’re not trying to be anything but the best tasting pork out there. We’re not organic because we’re not going to let an animal suffer without medical treatment, and we’re not giving them bag feed because they put all kinds of nasty things in it. That doesn’t produce the best flavor.”

Safely back at the bar, we got around to me buying a pig. There was the consideration of breed, the right size, the right flavor, and the right temperament for a man like me (I haven’t the beard, the burly frame, nor the four-wheel drive vehicle of a bonafide swineherder). We hemmed and hawed, I wanted to wait for some Managalitsa. Tank thought the smaller Guinea hogs would suit me best. But I did have something that Tank desired. I had secure land, where he wouldn’t have to hide his pigs and could market them to greater Charleston.

He wanted grocery stores to carry his pork, but he had no water or power on his land. He carried the water by hand, everyday, to his pigs. He wanted to expand, but he needed insurance, which requires an address. Tank Jackson wanted to grow. So the selling began. I offered him land, 50 acres with stands of swamp chestnuts and a secure barn if he’d grow me the tastiest pork chops known to man. He mulled my offer before sealing it on a gentleman’s handshake and the stroke of a pen. Holy City Hogs moved to Rebellion Farm last week.