Falling in and out of love in Blue Valentine 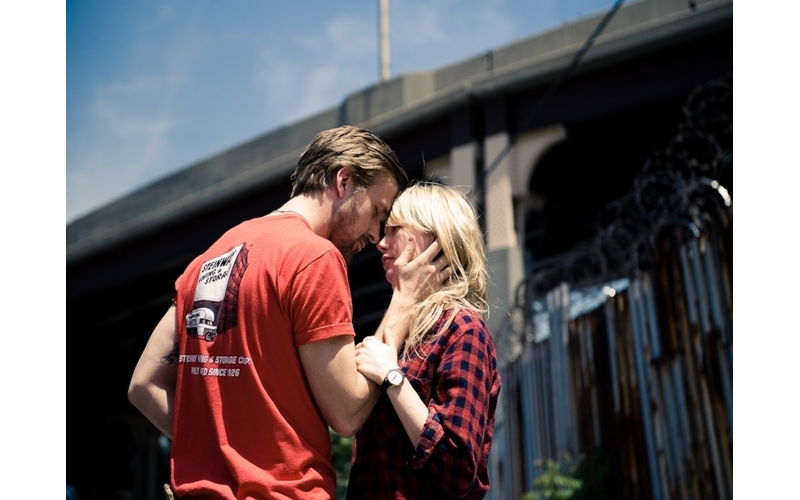 The Death of a Relationship

We’re so enamored with the love story, with its promise of happy endings and the sunny side of life, that watching a film about the dissolution of a marriage triggers deep feelings of loss and sadness. Blue Valentine is a difficult, heartbreaking film, but it’s also essential viewing if only for offering a corrective to all of the tales of blissful, uncomplicated love we’ve been spoon-fed.

Initially, it’s unclear what is at the heart of Cindy (Michelle Williams) and Dean’s (Ryan Gosling) troubles. They are not financially well off, but they have a daughter they adore. But indications that something is gravely wrong begin when Dean coerces Cindy into a romantic getaway at a cheesy Poconos love nest. Cindy runs into an old college flame at the liquor store on the way, which shakes the couple to the core, and every time Dean touches Cindy she pushes him away.

Director and co-writer Derek Cianfrance’s superbly executed film begins to color and complicate this troubled present-day relationship with flashbacks to the couple in happier days. Dean rescues Cindy from a brutish jock boyfriend and saves, or dooms, her by coming to her aid at a crucial time in her life. Those flashbacks are heart-wrenching, capturing the exquisite tenderness of Cindy and Dean falling in love. Dean, who has a tragic family history, provides Cindy with an escape from her unhappy home life, and his sense of whimsy allows her to indulge her carefree, silly side. The pair blossom in each other’s company; both are old souls who share a sensitivity toward the elderly, exemplified by their first meeting in an upstate New York retirement home. The old people in Blue Valentine imbue the film with another layer of melancholy. They represent a kind of future in Cianfrance’s taxonomy of relationships: the lonely end game in which one spouse survives the other.

The most arresting emotion in Blue Valentine is a profound sense of loss, for what is and for what is to become and the way the best times of life can corrode and transform into the worst. Blue Valentine makes you feel the heaviness of time, old age, and things passing away. It is as much a story about the birth of love as it is about the death of us all, how everything lovely eventually fades away. In a modern world where divorce is perhaps more of a reality than the advertised ideal of true love, it is unbearably sad to see Cindy and Dean at their most romantic and hopeful, racing through the streets of Brooklyn, making love, discovering the mysteries of the other person, all contrasted with their marriage’s bitter end.

Williams and Gosling pull off the remarkable feat of conveying bright possibility in the flashback scenes and exhaustion and squandered potential later. Both are deeply sympathetic, imperfect, needy creatures, and by the end of the film they feel as vivid and as real as friends. Her hair pulled back off her face, her shoulders hunched, Cindy conveys a bone-deep sense of despair in the small details of her demeanor and appearance. And the hip, quirky details that defined Dean — his leather jacket, his ukulele — have, in married life, been traded for the unshaven face and hipster wardrobe that suddenly look like badges of happy underachievement. While Cindy works on call as a nurse (the subtext is that her dreams of being a doctor ended when she met Dean) and has ambitions of moving up in the world, Dean gets drunk before his job as a house painter, squandering the potential he once represented to Cindy.

It’s little wonder that a young Cianfrance worshiped at the temple of avant-garde filmmakers Stan Brakhage and Pier Paolo Pasolini. His camera delivers people’s lives with the same light-soaked truth and intimacy that characterized Brakhage’s experimental explorations of childbirth and family. Cianfrance and his actors convey the tidal wave of love, how huge and deep it can be, which we measure against its brittle, ugly collapse in the present. Andrij Parekh’s (Half Nelson) camera pulls in so tight to the lovers’ faces and bodies that escape is futile. You are trapped along with them in the intimate hell of their predicament. But more than anything, Blue Valentine recalls the extraordinary, difficult, and perceptive work of John Cassavetes, whose ’70s films showed the pain and poetry of marriage. If you have it in you to stare one of the most ordinary but devastating experiences known to human beings — the death of a relationship — in the face, then Blue Valentine is guaranteed to stay with you for a long time.