Falling head over heels in love with aerial yoga

Strike a Pose ... in a Hammock 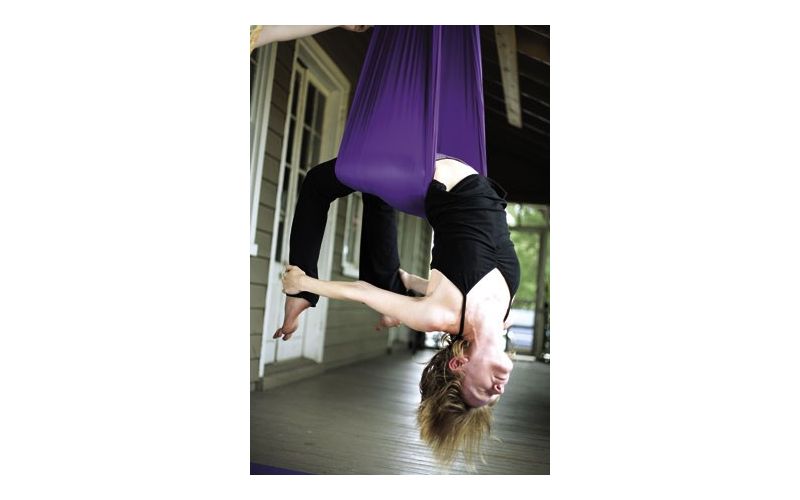 I don’t like yoga. Maybe it’s because I just don’t get that much out of doing poses named after animals. I also end up being picked on by yoga instructors since I always seem to be the only person in class who can’t get it right; it reminds me of middle-school gym class.

So when I first heard about aerial yoga — which is kind of like a mix of traditional yoga and Cirque du Soleil — I wondered if this class could change my opinion. That said, I fully expected to be the first person in my class to fall flat on my face. My roommate assured me that the long strips of fabric would be able to hold my weight, but I wasn’t convinced. I signed her up for the class, too.

We drove out to Sullivan’s Island’s PrimeTime Fitness early Sunday morning to see what all the hype was about. We entered the porch door of the house-turned-gym to see four yoga mats on the floor with four purple fabric hammocks above them.

Aerial yoga instructor Jordan Anderson was there to greet us. Anderson has been a yoga instructor for over five years — she also teaches “terrestrial” Ashtanga yoga at Serenity Now in Mt. Pleasant — but she recently started teaching aerial yoga classes. In 2009, she journeyed to the Big Apple to learn from the master herself, Michelle Dortignac, the creator of Unnata Aerial Yoga.

Anderson had us sign two liability forms which made the possibility that I might die or be injured feel almost certain. We then took our places in front of the four hammocks. The small class size allowed for a more intimate experience and the one-on-one instruction a novice yogi like me desperately needed.

Anderson warned us that “this is a yoga class with fancy equipment” and not aerialist training, so the usual yoga suspects are still there, including the downward facing dog.

Most of it involved stretching, since the lessened gravity allows your muscles to extend further, but at the end of the hour, we began our inversions, the part I had been dreading all morning. My roommate Rose, the circus geek, was of course a natural.

I had to place the hammock on my lower back and quickly swing my legs above my head before falling. Thankfully, I was more graceful than I expected. Zero falls on my face. Swinging upside down, I felt so silly that I broke into a laughing fit. Something about seeing everything upside down is hilarious.

For our cool-down, we got inside of the cocoon-like hammocks for five minute of breathing. I was able to block out the noise of passing cars and relax. Afterwards, I felt like a clumsy caterpillar who emerged as a graceful butterfly.

Make no mistake, aerial yoga isn’t easy. The inversions were a genuine workout, and the fabric itself also takes a toll on your body if you aren’t careful. You must wear clothing that covers your knees and armpits to avoid fabric burns. At the same time, I enjoyed it more than any other yoga class I’ve taken.

Don’t expect me to follow every sentence with “namaste,” but now I can proudly say that I’m a believer. So grab a friend, preferably a cranky anti-yoga person like me, and watch them lose all their cynicism while hanging upside down.

You can learn more about aerial yoga by visiting aerialfit.com or e-mailing Jordan Anderson at hang@aerialfit.com. Classes are $80 for a month-long series, $20 for drop-ins. PrimeTime Fitness is located at 2120 Middle St., Sullivan’s Island, and you can reach them at (843) 883-0101 or primetimefit.net.