Fake news and the miseducation of Dylann Roof 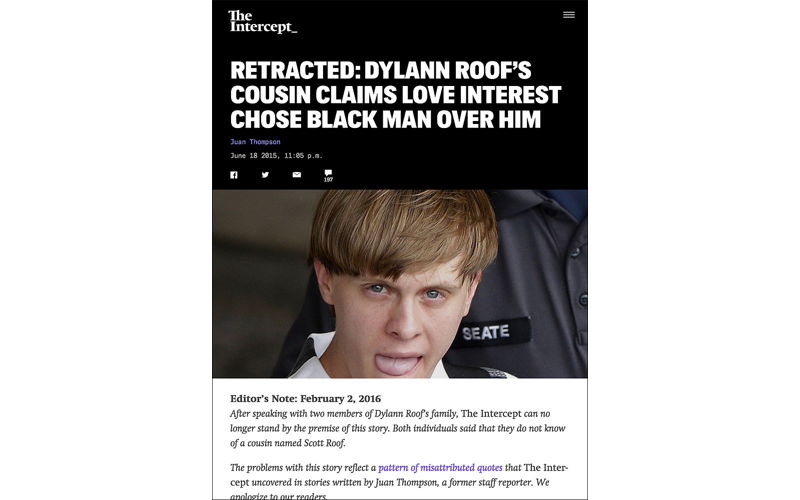 Dylann Roof did not enter Emanuel AME and murder nine people because of a girl. He is not a former child actor contracted by the government to carry out a false flag operation, and he was not sexually assaulted in prison. Yet, for some reason, these stories exist. And whether an effort to provide some explanation for his crimes or to simply provide readers with a sense that justice has been carried out before his trial even began, these stories have been widely circulated online.

Soon after Roof was incarcerated, the story of his jailhouse sexual assault was been passed around the internet, only to once again see a rise in popularity as his federal trial was underway. Posted on the website NYmeta.co, the fictitious account quotes several nonexistent prison employees, all describing a violent gang-rape scenario involving Roof. Oddly enough, Roof addressed the issue of sexual assault among prisoners in the handwritten journal discovered in his car.

“People joke about prison rape without ever thinking about how sick it is. It’s a touchy subject, I know, but white nationalists need to confront it,” he wrote prior to his arrest.

Maj. Eric Watson with the Charleston County Sheriff’s Office says that the story has been circulating since Roof was placed in jail and the department denied the article’s veracity last year. Unfortunately, the story remains online and has been shared almost 30,000 times on Facebook. Like many peddlers in fake stories, NY Meta describes itself as an entertainment site, but even more credible media outlets have found themselves on the wrong side of the facts when it comes to Roof.

Just one day after the shooting at Mother Emanuel, online news outlet The Intercept published an article that featured quotes from a man identified as “Scott Roof,” one of Dylann Roof’s cousins. In the article, written by Juan Thompson, the author said that he was told by the alleged cousin that Roof had “went over the edge when a girl he liked starting dating a black guy two years back.”

The cousin was also said to have added, “Dylann liked her. The black guy got her. He changed. I don’t know if we would be here if not” before abruptly hanging up the phone. This article was later retracted in February 2016 after editors learned that Thompson had seemingly made up the entire conversation, as well as the existence of Scott Roof.

“After speaking with two members of Dylann Roof’s family, The Intercept can no longer stand by the premise of this story. Both individuals said that they do not know of a cousin named Scott Roof,” states the editor’s note that now sits atop Thompson’s article.

While this story offers a misguided attempt at explaining what led Roof to open fire inside of the church that day, a look deeper into the fictional narratives that surround the white supremacist reveal an even darker truth about the internet.

Published on YouTube a week after Roof’s arrest, a seven-minute video attempts to argue that Roof is actually former child actor John Christian Graas, who appeared on Seinfeld and Kindergarten Cop in the early ’90s. While linking the two men solely through their similar haircuts, the makers of the video subscribe to the theory that Roof is a character created by the government and played by Graas to perpetuate some unknown agenda. Although this theory may seem absurd to many, a quick look at the comments under the video show that at least some people are willing to accept this theory as the truth. And this type of attitude is becoming more and more pervasive as stories like this find a wider audience online.

With research focusing on social media and mass media, Ferguson believes these fake stories are amplified by the ease with which they can be spread. You can retweet or share a story at the push of a button. And while social media sites have opened up an entirely new level of connectivity for people, they have also made it more difficult to rein in false information once it begins to spread. This wealth of voices can also strain the trust of readers who are now inundated with more information than ever before.

“I think when people are exposed to more viewpoints, they say, ‘Wait a minute. I watched on the news last night that this is true. Now here is a story that’s got a lot facts and a lot of duplicate sources saying the exact opposite thing. Who am I to believe?’ So they get upset,” says Ferguson. “If you have one watch, you always know what time it is. But if you have two watches, you’re never quite sure which one is right. I think that the distrust the media comes from having so many voices.”

Now, with so many news outlets tailored to the specific viewpoints of their readers and viewers, audiences can avoid the stress of all these different voices by simply subscribing to a single news source more in line with one’s own thinking. From a business perspective, it becomes more lucrative to give the people what they want rather than the full story. “It’s the same reason why CNN tends to be watched by Democrats and Fox News tends to be watched by Republicans. They are seeking what they believe to be true. It’s the reason why a certain type of person just worships NPR radio in the morning because it’s just so soothing to hear the world constructed as the way they see it,” Ferguson says. “Even before social media, if you didn’t want to hear ‘friend of a friend’ stories that upset you, you just chose to associate with different people. If there was somebody who espoused crazy ideas a lot, you just didn’t go to that barbershop or you just didn’t patronize that store or you selectively went to family events because you can avoid what you don’t want to hear.”

And this is exactly what Dylann Roof chose to do. Ending his formal education in the ninth grade, Roof chose to shape his warped world view online. Describing himself as “very well-versed in racism,” Roof exchanged messages with other white supremacists on the website Stormfront.org. Writing under the username “LilAryan,” he made few attempts to arrange meetings with those who shared his opinions on race, while actively avoiding real-world relationships that might undermine his way of thinking.

“Dylann is quite unique from most white supremacist killers. For one, he’s far younger. The truth is that most whites supremacist killers are in their late 30s, early 40s, and some are even as old as in their 70s in their 80s. That is different than radical Islamic killers who are a little bit more like Dylann Roof. They’re younger. That’s because most white supremacists go through a much longer indoctrination period that involves usually being involved in particular organizations in the real world,” says Dr. Heidi Beirich, director of the Southern Poverty Law Center’s Intelligence Project and expert in white supremacist extremism. “As far as we know, Dylann Roof didn’t do that and that makes him very different. In fact, if he’s like anything, he’s like ISIS people. Young people who look at ISIS Twitter accounts, get sucked into that ideology, and then go join the fight in Syria or commit domestic terrorist attacks. He’s actually rather unlike your typical white supremacist killer. This complete online radicalization over the maybe two and a half years he was in his room is very atypical.”

Roof cites the death of Trayvon Martin as the moment that he began to develop his racist ideology. From that point, he very quickly set about pulling together more and more misinformation to fuel his plans to start a race war. Roof has been adamant that his belief in white supremacy was not handed down from his parents. Instead, he has stressed that he learned everything he needed on his own, online.

“He learned to hate black people very, very fast without the intervention of other human beings. He came to believe he had to act on it very, very fast. In other words, he was completely fed white supremacist propaganda … It was a solo journey that he went on with the aid of the way Google works,” says Beirich. “I don’t think we should excuse Google’s role in this either. One of the things that’s happening is Google monetizes your searches. They’re trying to give you what you want. If you start looking at black-on-white crime like Dylann Roof did, you’re going to get more and more of this. So the chances of you running across, let’s say, the FBI statistics — which would tell you actually white people are mostly killed by white people, black people mostly by black people — they disappear.”

Beirich adds, “So if you weren’t good at differentiating fact from fiction or propaganda from reality, you can very quickly come to think that what you’re reading is the absolute truth just by the pure volume. It’s all you’ll run into … And it’s the same thing with the fake news. They can’t tell what’s real and what isn’t. That’s a disturbing phenomenon and one that impacts all of society, not just a potential white supremacist killer, but the false education of people on all kinds of topics.”