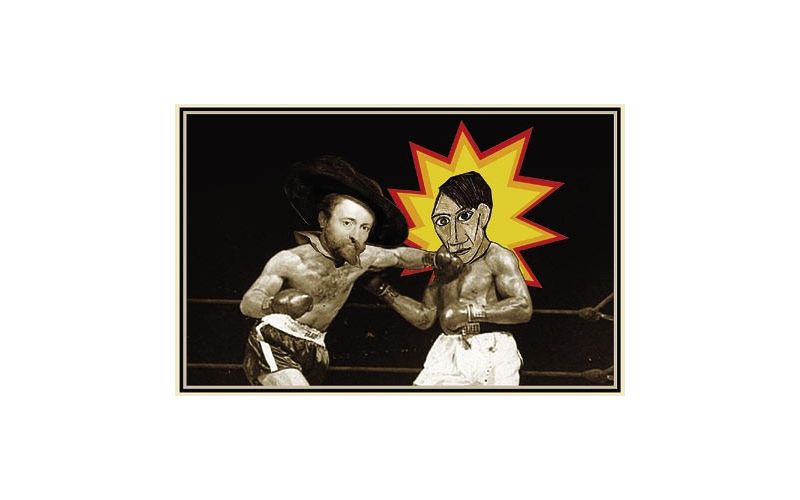 The gloves are off for a knock-down, drag-out series of bouts on Spring Street this Saturday. But don’t expect blood on the canvas. The event features painters, not pugilists, and the slugging going on will be at the cash bar.

Sixteen artists will take part in a 10-hour Portrait Slam, split into four rounds, facing off against each other and painting each other as well. Three judges — John Hull, Lese Corrigan, and Donna Hurt — will jury their pieces, axing artists as they go. At 8:30 p.m. the winner will be announced, receiving a purse of $500.

The Slam is being organized by Eye Level Art Gallery and artstudentgallery.com, a website that helps students and grads take the next step in their careers as artists. It will be the first event in Eye Level’s new, large space on Spring Street.

“Some people have seen art shows there before,” says Eye Level owner Mike Elder, “but not like this. It’s real simple, nothing fancy.” He compares its bare bones layout to his Warehouse Gallery on Heriot Street, but the new space has more character with an 1830s, theatrical-looking façade and a 1960s German-style courtyard.

Elder hopes to pack the place out with the portrait paint-off. Max Miller, founder of artstudentgallery.com, came to him with the suggestion. “There’s a big conglomerate of local artists in the competition,” Elder says. “Artists I know or Max knows, along with a couple artists we don’t know. It’s a good mix of newbies like Joanna Jackson all the way up to Bill McCullough. He’s the master.”

For some of the competitors, portraiture is their métier. For example, Robert Maniscalco is a portrait artist who paints every day. He sees the event as an excuse for him to indulge in his favorite thing. “I’ll be getting some painting in,” he says. “That’s what I love to do. I’ve never done anything like this, and I’m not quite sure if I’m ready. I’m prepared to get knocked out in the first round.” But Maniscalco admits it would be fun to “knock someone out with a stroke of paint.”

To Miller, the slam is an opportunity to level the playing field. “It’s a chance to bring exposure to the gallery and bring artists together in a friendly atmosphere,” he says.

“We want it friendly,” Elder agrees, “but we want tension for sure. We want them to start dueling off with each other, getting more feisty. Not hating each other, just competitive.”

To start the sparks flying, Elder and Miller drew up an initial list of 40 artists with different personalities and art styles who they thought might be good in the event.

“It was fun to point out who would be into it,” Miller continues. “We were surprised which artists were adventurous enough to do it, and we expected others to be into it who weren’t.” As a warm-up, Miller has challenged the artists to get out of the studio and into public, painting each other on Marion Square and spreading the word to passing tourists. He got a negative response from some of them. “Some said, ‘I don’t want people to see me work.’ If you ever hope to sell your work, you need to show what you do along the way.”

Spoleto’s a great time to do that, and Elder is determined to make the most of the influx of visitors. “The festival hurt my business when I was based on Queen Street,” he says. “I almost wouldn’t go in. Collectors would buy on Marion Square instead of coming to me.” This year is different. Elder has closed his small gallery on Queen, focusing on his two warehouse-sized spaces. One of the competing artists, Joanna Jackson, has a Piccolo tent and will be handing out flyers. Combine that with the attention-grabbing public paint-offs and Elder feels he’ll have a “more interactive experience.”

If this slam’s a success, Miller plans bigger and better repeat performances in Charleston and beyond. It seems that where art events are concerned, Charleston is a good testing ground before the idea’s taken to a larger city.

With years of art show experience between them and a palpable passion for their work, Elder and Miller should have no reason to fear.