Exploits of Jack Abramoff are as funny as cancer 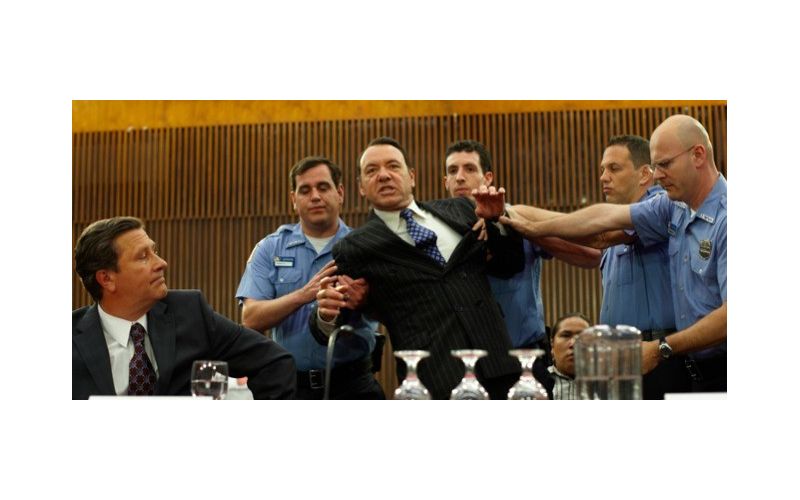 A black comedy about corrupt, money-grubbing lobbyists fleecing Native Americans and batting on-the-take congressmen around like rag dolls may have been funny a few years ago. But in a post-bailout, recession-fatigued America, Casino Jack‘s chuckle-fest dramatization of the exploits of Jack Abramoff (Kevin Spacey), the "super-lobbyist" turned six-year house guest at the federal pen, is about as funny as pancreatic cancer.

Spacey is in high-octane actorly mode here, his coal-black eyes glittering with greed and his meaty hand ever-outstretched in glad-handing and back-slapping. He stars as the high-powered Washington, D.C. lobbyist who believes that God virtually ordained his money piles.

From every outside indication, Abramoff is proof of his own success: he has a gorgeous home, a loving blonde wife (Kelly Preston), and a devoted cadre of business associates including Congressman Tom DeLay (Spencer Garrett), who Abramoff keeps in his back pocket. Abramoff appears to be a winner whose big talk about opening five-star restaurants and Hebrew schools seems outrageous, until it happens.

Abramoff also has a reptilian co-conspirator named Michael Scanlon (Barry Pepper). Their shady dealings buying off Congress and spewing racist invective while playing corner-office carpet golf are shellacked with a sunny, effervescent retro soundtrack. That winking music is meant to cue irony-deaf audience members into the proper appreciation of Casino Jack‘s "outrageousness." It gets old fast.

Directed by George Hickenlooper and written by Norman Snider, Casino Jack opens on an energetic high note with Abramoff in a bathroom mirror telling himself why he does what he does — he, in a nutshell, deserves it. But slick Jack’s naughtiness soon catches up with him, especially his involvement with ludicrously slobby mattress mogul Adam Kidan (Jon Lovitz). Kidan helps the ever-ambitious Jack buy a bankrupt cruise ship line from another grotesque caricature, a sleazoid Greek mogul (Daniel Kash). Soon the whole house of cards is toppling around Abramoff and his blinged-out cronies.

Soft-pedaling its ideas is not Casino Jack‘s strength and the ludicrous inclusion of human cartoon Lovitz is just one example of the annoyingly outsized look and feel of the film. Though Abramoff’s story has already been treated in nonfiction form in the Alex Gibney doc Casino Jack and the United States of Money, Hickenlooper’s version is a blend of Carl Hiaasen, Doonesbury, and Charlie Wilson’s War. Casino Jack comes from the outlandish school of political satire; it’s wallpapered with bimbos, gangsters, private jets, fist-fights, and extremity galore. There’s an absurd tone to the movie, like when Scanlon’s cheated-on girlfriend Emily Miller (Rachelle Lefevre) decides to go to the Feds with news of Scanlon’s exploits. Her opening gambit is to throw his new girlfriend’s red panties on the agent’s desk. Really? Understatement has no place in this spewing smokestack of a movie belching out its black stuff.

Granted, much of that excess is grounded in fact. Washington lobbyists have a reputation for high living, and Abramoff was certainly a special breed even within that world. He was a man who early in his career wrote and produced the Dolph Lundgren film Red Scorpion and never lost his taste for big Hollywood-calibre talk even within conservative Washington.

To their partial credit, Hickenlooper and Snider do cut to the heart of what makes such men tick: These guys feel entitled with every fiber of their being. Abramoff writes off the unmoneyed of the world as "troglodytes," including the Native American casino owners he’s fleecing, and he thinks because "I work out every day" that he is one of God’s chosen.

But for the most part, the degree of corruption played for laughs in Casino Jack doesn’t seem especially funny or even very entertaining in Hickenlooper and Spacey’s hands. It might have all been funnier if it weren’t for a certain sinking sensation that Abramoff is just the tip of the iceberg when it comes to corrupt political wheel-greasing and back scratching in Washington. Laugh at the multiplex, but weep at the newsstand.