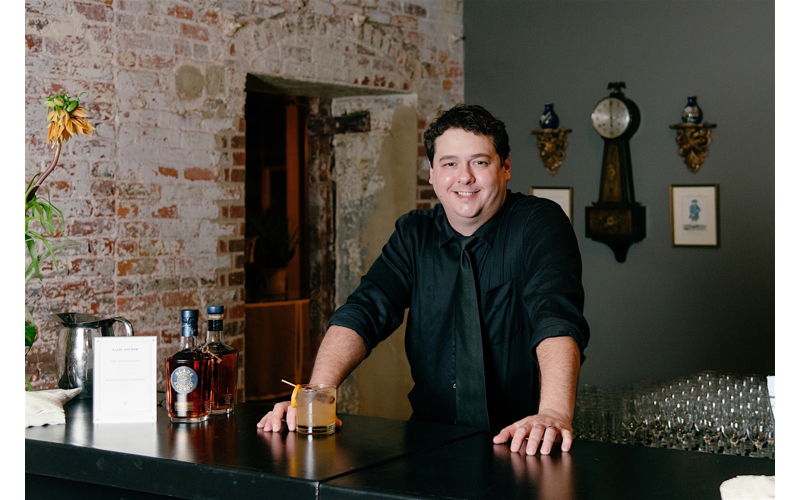 He was the head distiller at Charleston Distilling Co., “I was a whiskey maker and a gin maker, and I did tours every day.”

He’s officiated a wedding; “You can add that to something weird that I’ve done.”

He once worked an event for a Jimmy Buffet-themed residential community where hundreds of unanticipated attendees showed up, “Over a thousand seniors saying, ‘Where’s my burger? I want a cheeseburger in paradise!’ That was just a nightmare.”

He occasionally works with his brother, an immigration attorney, “I go and bail people out, which is a lot of fun.”

He’s painted houses. He’s catered private parties. When he answered the phone to talk about this story, he was in Bluffton with a sander in hand, working on restoring a family home. Mikell Elliott is everywhere.

With a non-traditional schedule comes flexibility, like the flexibility you need to go to Bluffton to restore a home, or to pick up and head out on vacation. “Your schedule’s always changing,” says Elliott. “I knew I had the time to come to Bluffton this week. Last year, my wife and I were able to spend a month-and-a-half in Canada for our honeymoon. It’s always fluctuating.”

But when wedding season is in full swing, Elliott gives most of his freelance focus to Squeeze Onsite, a cocktail catering company. Yes, this is the same Squeeze that sat on East Bay Street before a massive fire in 2013 forced the tiny bar to close their doors. Owner Clint Gaskins didn’t let the fire halt their momentum. He adapted and made the bar mobile, an ingenious move considering Charleston is one of the top wedding destinations in the nation.

Elliott’s been bartending off and on for over 17 years, with nearly 10 of those years spent working with Squeeze. He’s watched Charleston’s wedding industry evolve as people across the nation have discovered the city’s charm and hospitable ways — not that we need many more people to figure that out. “We do other events, but weddings are the bulk of it. No longer is Saturday your only wedding day. We’ll work weddings all through the weekend. Occasionally, we’ll even see a Thursday wedding,” says Elliott. “This is where people want to get married. It picks up after SEWE and powers on until mid-November.”

The best part of working weddings? They’re never boring. “When you’re working weddings down here, everything is in the mix. I get to work in some of the coolest homes in Charleston because of this,” he explains. “Go to Magnolia Plantation on a Saturday at the height of wedding season, and there’ll be three or four weddings going on at the same time on different parts of the grounds. It’s absolutely gorgeous.”

Managing the bar at a wedding can be tricky. You have to be a people person to deal with all the personalities you come across. After all, emotions run high during weddings. “It’s fun showing up for a new event, not knowing what’s coming, not knowing if there’s going to be a drunk uncle or whatever to deal with,” he laughs.

And weddings are simply a damn good time. That feel-good energy is contagious even if you’re not the one partying down on the dance floor with a cold one in hand. “People dress their best. Generally speaking, they’re in a great mood. They know they’re getting free drinks. I mean, you don’t always get the chance to go out and see these places, but now you get to go see them and have a good time and eat food. Maybe someone gets up and gives a bad speech. When you work these events, you feel like you’re part of the family for a night.”

It takes an outlook like this to happily juggle several pursuits, especially when much of those involve event management. Elliott’s approach to work parallels his philosophy on life. It’s all about playing the cards that you’ve been dealt and enjoying the many random outcomes that come up during the game.

“Anyone will tell you that if you’re doing something you don’t like, you shouldn’t do it. You have to love what you do. I choose to mix it up and do a bunch of different things, and life never gets old.”

Being a chef is mentally, spiritually, emotionally draining — the long hours, the shitty pay, the ever-mounting pressure. It’s perhaps the physical aspect of the job, though, that is most depleting.