Embark on a splendid and varied culinary journey at Wild Common 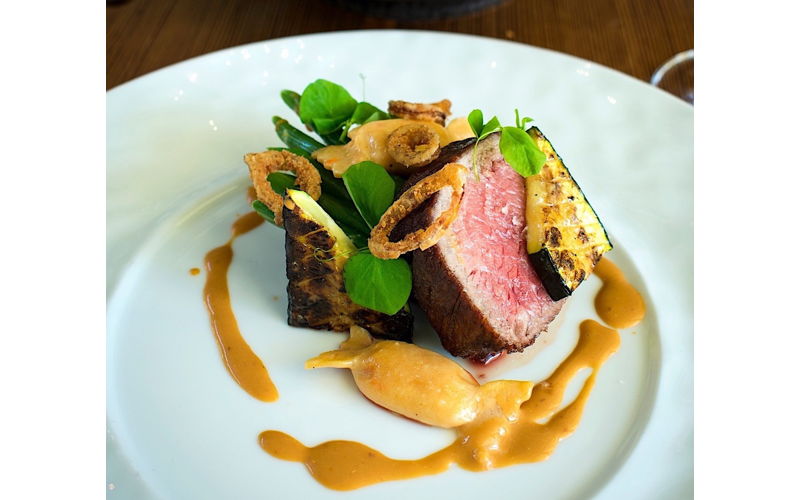 Choice can be overrated, especially when it comes to menus. Multi-page tomes with dozens of apps and entrées devolve into rote permutations, the same sides and sauces reappearing on plate after plate. To all but a studious oenophile, massive leather-bound wine catalogs become impenetrable forests of varietals and regions.

Limiting choice does not necessarily stifle variety, though, as the streamlined menu at Wild Common shows. Its four “Bites,” two “Firsts,” three “Nexts,” and two desserts fit on a single side of a cream-colored slip. You can order a la carte, but if you and a companion go the four-course prix fixe route ($65) and stagger your selections, you can sample almost everything on the menu. Throw in $45 more for pairings, and the wine decisions are taken care of, too.

Be sure to invite someone who likes to share, though, because you won’t want to miss out on the varied array that emerges from executive chef Orlando Pagán’s kitchen.

The heaviest plate is the dry-aged New York strip ($36), and it isn’t particularly heavy. There’s no beefy slab topped with a thick red reduction here. Instead, it’s a bit of a jumble, with rosy half-inch slices of rare beef tossed with what is billed (in ironic quotes) as “ratatouille.” Don’t expect meticulous spirals of mandolined veggies, for this version is decidedly wild: a few long, thin slices of charred zucchini and skinny, crisp green beans. The brightest color on the plate is the pale orange tomato emulsion that arcs around one side.

Those tender slices of steak are delicious, their rich, earthy flavor pulled out even further by the berry-rich finish of the Rioja with which it’s paired. Golden brown fried shallots add an addictive little crunch. Each of Wild Common’s plates has at least one surprise element. With the strip, it’s three small ravioli made from thin, delicate pasta twisted like a candy wrapper around the creamy filling — an unusual but satisfying accompaniment for a steak.

The unexpected touch on the tilefish entree ($34) is a handful of tiny broccoli florets fried until each thin bud stands out crisp and distinct. They’re scattered around the golden, diamond-shaped wedge of fish with a few chanterelles and a generous drizzle of pale green meyer lemon vinaigrette, the browns and greens evoking a woodlands scene.

The same inventiveness is found in the “Bites” that start the meal ($11 each) and the “Firsts” that follow. A raw oyster’s cool, somewhat muted briny flavor is accented by mint and sweet aji dulce slivers. A chunk of Korean barbecued ribeye on a wooden skewer delivers a char-heavy first bite and a pleasing blanket of spicy heat on the finish. A soft, puffy steamed bun has shreds of tender braised duck tucked inside, with lovely acidic pops and hints of ginger from pickled cucumbers and carrot.

A single thick, perfectly seared scallop ($18) awaits above a circular island of sweet corn pudding laced with succotash, the corn’s vivid yellow color punctuated with bits of green lima and red pepper. The corn is supremely sweet, a perfect contrast to the scallop’s silky richness, and the bright tang of chorizo vinaigrette finishes a simple and delicious plate. The acidity and citrus of the paired sauvignon blanc (a 2017 Kivelstadt Cellars Family Secret) sips beautifully alongside.

The other “First,” an heirloom tomato salad ($14), initially seems to pale in comparison against the explosive richness of the scallop. Tableside, the server pours a perfect circle of bright white ajo blanco beside chunks of red and yellow tomatoes and peaches. The sauce has just the mildest hint of garlic, but with each bite its cool creaminess becomes a more and more compelling contrast to the sharp acid of the tomato and the peaches’ summer sweetness.

It’s hard to tease out a theme among the menu’s array of flavors. Some elements — ajo blanco, chorizo vinaigrette — invoke the Iberian Peninsula, while others roam around the Middle East and Asia. A few — the aji dulce on the oysters, the delicious coarse-crumbed blue corn tres leches cake ($12) paired with Don Q Anejo rum — nod toward chef Pagán’s Puerto Rican roots.

Resy, the app Wild Common uses for reservations, categorizes the fare simply as “American,” and I think that will do. The restaurant’s name was taken from a D. H. Lawrence poem, a sort of abstract, breathless celebration of life sparked by a walk through an overgrown English field, where, “All that is right, all that is good; all that is God takes substance!”

As a unifying theme, it’s rather abstract and open-ended, but the wildness here seems restricted to what’s on the plate. Located inside what was Cannon Green restaurant and adjacent to the Cannon Green event venue (the kitchen does double duty catering weddings, rehearsal dinners, and other events), the space is sleek and stylish — all whites, pale greens, and browns.

Beyond an L-shaped bar, the dining room has soaring ceilings and tall green-backed banquettes with conical pendant lamps over polished wood tables. On the broad white wall at the back, an LCD projector casts a series of Charleston scenes — silhouetted palm trees, the Ravenel bridge — that shift as you dine, projecting a touch of local imagery over what is otherwise a cosmopolitan, unmoored experience.

The service strikes the right balance between formality and informality, friendly and humorous but also very knowledgeable and attentive. The pace of the meal feels spot on, too, with wine pairings arriving just before their corresponding plates and each course emerging with just enough time since the previous one for you to have a pleasant pause for reflection and conversation.

All told, it’s a delightful dining experience. The only real headwinds that I can see is that Wild Common is sort of hidden away inside Cannon Green, which is itself tucked in among a row of single houses on Spring Street. You might drive right past and not even realize the restaurant is there.

But it’s worth a little detour away from the crowded sidewalks of King Street to seek out this not-so-common option. It’s a mode of dining I really enjoy, and I hope more Charlestonians discover it, too.