Edmund’s Oast lives up to the hype — and then some 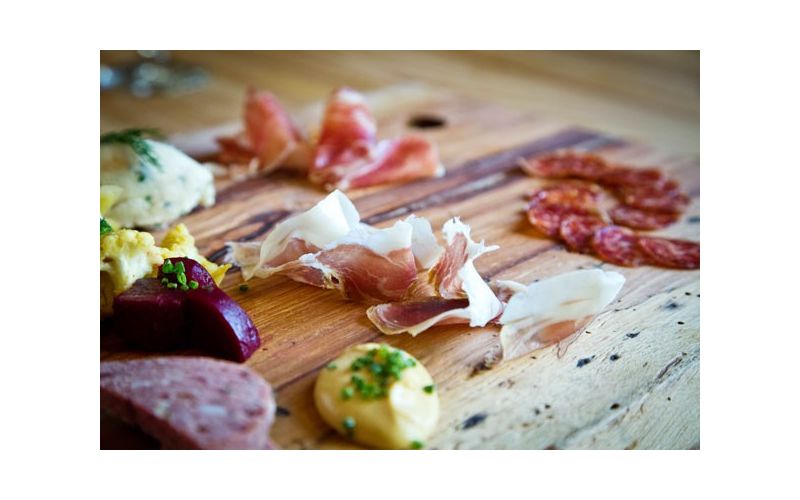 Back in September I found myself standing inside the empty frame of a building, listening as Scott Shor and Rich Carley enumerated their plans for their new restaurant, Edmund’s Oast. With no walls, no floor, just a red steel frame topped with a metal roof, it was hard to translate the words and general hand-wavings of Shor and Carly into a concrete picture of what they were envisioning. But one thing was clear: their vision was expansive, the details piled one atop another in rapid succession. There would be an open kitchen with a 10-seat chef’s counter, whole animal butchery, and loads of charcuterie, plus lamb, goat, and even less popular meats. But, it wasn’t going to be a meat joint, necessarily. There’d be lots of vegetables, and Edmund’s would serve up plenty of seafood, too.

And since Shor and Carley are the founders of the Charleston Beer Exchange, Edmund’s was going to have plenty of good beers on tap. More importantly, they were going to make their own beer, too, in an on-premise brew room, and it’d be weird, funky stuff people couldn’t get anywhere. And they were going to have thoughtful cocktails, too. Oh, and also a serious wine selection.

Six months later, we can finally see that vision in its material and operational form, and I’ll be damned if they didn’t actually pull it off.

Even early in the evening, the long bar and two community tables are abuzz with activity, though things are a little more sedate at the rows of four-top tables and booths lining the other side of the big open room. A steady stream of servers whisk by in striped aprons, plates in each hand.

Executive Chef Andy Henderson’s menu offers a few full-sized entrees like seared red snapper with English peas ($26) and a miso-rubbed pork loin over farro ($25), but most of the offerings come on small plates, which you can order in flights and let the meal evolve to follow your fancy.

Hunks of cornbread ($4), sweet as pound cake, arrive with a wedge of melting honey butter oozing over the top. The smoked bar nuts ($4) have a wonderful balance of salt and mild smoke, and you don’t need to be at the bar to enjoy them.

Dozens of hams and sausages hang prominently in a wide glass case on the wall over the kitchen. Both the fresh and the cured charcuterie boards ($12 small, $20 large) offer worthy morsels made in-house, though the tender lamb ham and rich, dark liver pâté give the edge to the fresh board.

The carrot, potato, and egg salad ($11) is a beautiful, colorful plate, an arc of orange carrots, red potatoes, and peppers accented with bright green herbs and tiny yellow flowers atop a white base of yogurt. When you pierce the poached egg, it adds a splash of yellow yolk that merges with the yogurt into a creamy, sensual dressing. Equally colorful is the plate of cured mackerel ($11), whose firm, sharp flavor is nicely balanced by the citrus bite from supremed oranges and delicate, red-rimmed slices of spring radish.

Superb pickled shrimp ($12), abounding with floral fennel, ride atop a raft of toasted rye. Tender lamb meatballs ($11) braised in a cider-laced jus are topped with sweet apricots and a deft accent of fragrant mint. The fresh-made ricotta ($12) is accompanied by a mound of charred broccoli and cauliflower florets that have just the right burst of smoky crispness to complement the soft, cool, and intensely creamy cheese.

Some of the edgier-looking dishes turn out to be among the most delightful. The Carolina Gold heritage chicken porridge ($12) is a sort of high-end take on chicken bog, pleasantly salty with thin slices of poached shrimp and tender spring onions. Chicken gizzards and duck hearts are featured in a bowl of perfectly-textured tagliatelle ($13), which gets even more silky richness from crème fraîche and chopped liver. Hidden among the dark flavors are sparkling lemon notes and crisp bits of texture that take the whole thing over the top

As it turns out, the beer selection surpasses the well-founded expectations, and it’s almost overwhelmingly rich in choice. The contents of the 48 numbered taps, as if to emphasize their every-rotating impermanence, is displayed on removable white boards hanging from silver eyelets on the big black wall above the bar.

The selection includes some of the more interesting variations from Charleston’s local breweries and from the gypsy brewer Evil Twin, along with rare imports like the Square Root 225 Zymatore from Switzerland’s BFM. Against these, the five beers produced right there in the brew room stand up quite well, including the novel Peanut Butter and Jelly, which smells and tastes like, well, a PB&J sandwich, and the “aggressively sour” Faust, a red ale with a nice fruity flavor.

Eric Doksa, the City Paper‘s resident beer nerd, declares that “Edmund’s Oast will become one of the the best craft beer bars in America.” I see no reason to disagree.

But, Edmund’s beverage team knows more than just beer. Head barman Jayce McConnell’s cocktail selection ranges the full spectrum of flavors. Some, like the lemon- and rosemary-tinged Arboretum ($12) and the French Maneuver ($11), a sort of brandy old fashioned punched up with yellow chartreuse and lemon, are clean and citrusy. Others take you to dark, bitter places. In The Glacial Pace ($12), a complex layer of flavors from Linie Aquavit, Cocchi Americano, Green Chartreuse, and botanical-rich Junipero gin merge into a surprising drink that’s delightfully dry and herbal. The Ninth Circle ($12) layers the smoke of mezcal and the heat of Hellfire Habanero Shrub bitters atop bitter Campari and darkly sweet Carpano Antico — a sort of smoky negroni that, despite the touches of fire and brimstone, is a heavenly drink.

Then there’s the Red Wedding ($10), a dynamic cocktail. It’s mostly a blend of 94-proof Elijah Craig bourbon and herbal Averna Amaro. The trick, though, is in the ice: three deep-red cubes that turn out to be frozen sweet tea tinged with hibiscus and thyme. As they melt the drink transforms from a stiff, bitter bracer to a sweet, herbal sipper. It’s perhaps the most creative entry on an innovative slate that should have the cocktail cognoscenti elbowing the beer geeks out of the way at the bar.

The cocktails, the beer, and the food share some common themes: inventive, unexpected, and complex flavors, plus the daringness to go in new and unconventional directions. The small plate format is perfect for letting a group sample a wide array of dishes, and there wasn’t a single note off-key on any of the ones I tried. The herbs are fresh and bright, and there’s an adept use of acid notes from lemon and orange to tease out flavors.

The setting seems right, too. The servers whisk away each plate and utensil as you finish with them, executing a full changeover of plates and silver between courses. They discuss the ingredients in both food and drink knowledgably and comfortably, too.

If anything, the decor may err on the side of sparseness: bare wood tables, heavy flatware, and sturdy white plates. Within that big room, as the night goes on and the bar grows crowded, it can get crashingly loud.

But is it too loud? Not for me. This is a sort of high-energy, rock ‘n’ roll kind of place. I can’t imagine it working within the cool elegance of a well-dampened room with oil paintings and a tinkling piano in the corner. You need that buzz and clamor as the crowd peaks around 8 p.m.

As the din builds and the crowds start clumping around the long bar and the big community tables, the service at the main tables, once impressively snappy, gets noticeably slower — not enough to ruin the night, but plenty enough to notice. For me, that’s the only slip in what is otherwise a top-notch experience.

When you get down to it, Edmund’s Oast has executed a very successful launch, one that followed through on — and, in fact, over-delivered on — all the pre-opening hype (and there was plenty of that). It checks the boxes off all of the requirements for the contemporary mode and takes many of them a step or two further.

All these elements are brought together and orchestrated in such a way that no one of them overshadows the other. And that leads to a radical thought, might Edmund’s Oast be a sign that we are returning to the era of the restaurateur and not the chef?

Make no doubt, the leaders of the kitchen, bar, and brewery aren’t being kept behind the scenes. The local-centric, small-plate style is the handwork of Chef Henderson, who rose through the ranks at FIG before spending three years as chef de cuisine at San Francisco’s Local Mission Eatery. Cameron Read, whom Shor and Carley enlisted to run the Greenville version of their Beer Exchange, is the beverage manager and master brewer, and they snagged Jayce McConnell from John Currence’s Snackbar in Oxford, Miss., to oversee the bar and create those noteworthy cocktails.

But, the organizing intelligence behind Edmund’s Oast seems to be Schor’s and Carley’s. It’s their vision, their ethos. Walk into the dining room on any given night, and the two will be there, in suits, hustling plates of cornbread from kitchen to tables, chatting up the diners, making sure their drinks are filled and they have what they need.

When I interviewed them back in the fall, they explained it this way: “We’re creating the kind of restaurant we want to eat at.” Plenty of other people seem to want to eat there, too, and it makes Edmund’s Oast a notable new entry on the ever-expanding Charleston scene.