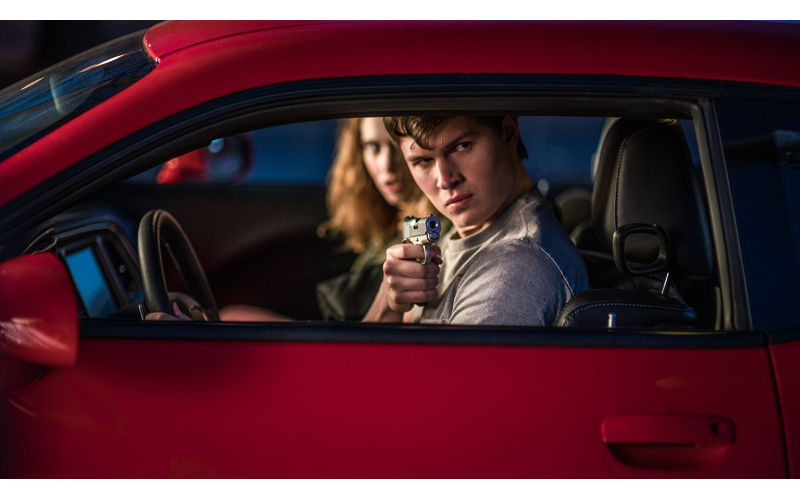 Life in the Fast Lane

Edgar Wright, the man behind the edgy romps Shaun of the Dead (2004) and Hot Fuzz (2007), comical deconstructions of the zombie and cop buddy genres, as well as the quirky, if not gonzo, adaptation of the graphic novel series Scott Pilgrim — as Scott Pilgrim vs the World (2010) — moves into far darker territory with his latest, Baby Driver. The project may have taken root as a result of Wright’s affiliation with Quentin Tarantino on the 2007 B-flick homage, Grindhouse, but the texture isn’t so much Tarantino pulpy as it is the kind of criminal abyss you might find in a Nicolas Winding Refn film if served up with the kitschy kinetic flourishes of an unbridled Luc Besson.

The film, in short, is an adrenaline shot that never lets down. You won’t get a chance to go to the bathroom, but also, because of the breakneck pace, the audience never gets a chance to get caught up emotionally. Wright gets right to it as a squad of robbers (played by Jon Bernthal, John Hamm, and Eliza González) and their driver, the titular Baby (Ansel Elgort) hold up a bank. We don’t go into the bank for the job but hang out in the car with the aptly named wheelman (née, boy), who has the fresh face of a J. Crew model and doesn’t appear old enough to drink, as he listens to tunes on his iPod and plays air guitar. It’s a cute moment for a while, but after a bit, it becomes clear it lacks the energetic meanness of Tom Cruise in his skivvies in Risky Business. Blessedly, the robbers pour out of the bank with the heat hot on their tail, and this is where Wright and the film really kick it up. Baby’s got Mario Andretti skills and Steve McQueen cool and to prove the point, we get an endless phalanx of blue and whites to chase Baby’s hot-red Subaru through the streets of Atlanta. Cars crash, traffic backs up, and there’s nothing Baby won’t try as the net tightens. Wrong way down the freeway, no problem.

There’s more to the movie and more high-energy car chases that will leave your jaw on the floor, and it’s impressive as to how Wright has done it. Like George Miller did with Fury Road, Wright’s gone old school and resorted to good, old fashioned stunt driving with little reliance on a green screen or the type of special effects one typically sees in the Fast and Furious series — a fine enough series, it’s just that you don’t drink in any palpable artistry or risk in such endeavors.

Of course, Baby has a backstory. Lost mom and dad early, grew up in a foster home, began boosting cars early, and one night, picked the wrong Mercedes to take for a joyride. That tricked-out Benz full of merch belonged to an enigmatic big wig by the moniker of Doc (Kevin Spacey — who else?) with the cops in his pocket and a crime ring he runs out of an old warehouse much the same way Lawrence Tierney and Chris Penn as father and son did in Reservoir Dogs — names and all. Doc basically owns Baby, and Baby’s got vulnerabilities too, be it his deaf foster dad (CJ Jones) or Deborah (Lily James), the waitress he pines for who works in the same diner his mom did and has the same melodic country voice when she dips into tune as she often does.

Besides the chase sequences, what makes Baby Driver go is the hot potpourri of personalities Baby gets paired with — he’s the perennial good luck charm and gets synched up with rotating crews. The standout is clearly Jamie Foxx’s edgy, smooth muscle, Bats, but Hamm and González are a joy as the criminally wedded couple, while Bernthal and Larry Joon prove peevishly distracting in brief bits.

Elgort, who came to rise through the Divergent series, fills the lead role effectively enough. The shortcomings aren’t really his fault, as Baby is more of a concept than a character — a tune-addicted, hearing-impaired pretty white boy with a black foster pop — that’s a lot to bite off and then there’s his romantic obsessions with mom. Ryan Gosling’s getaway driver in Refn’s Drive (2011) was a far more complex and real incarnation, the troubles and vulnerabilities there felt foreboding and genuinely off the street. Wright, like Tarantino, is a master of his craft and knows how to imbue it with quirk and wit in a seamless way. The main difference between the two being that while both wrap their arms around high concepts, Tarantino is character obsessed and in that obsession comes the soul that drives and binds.