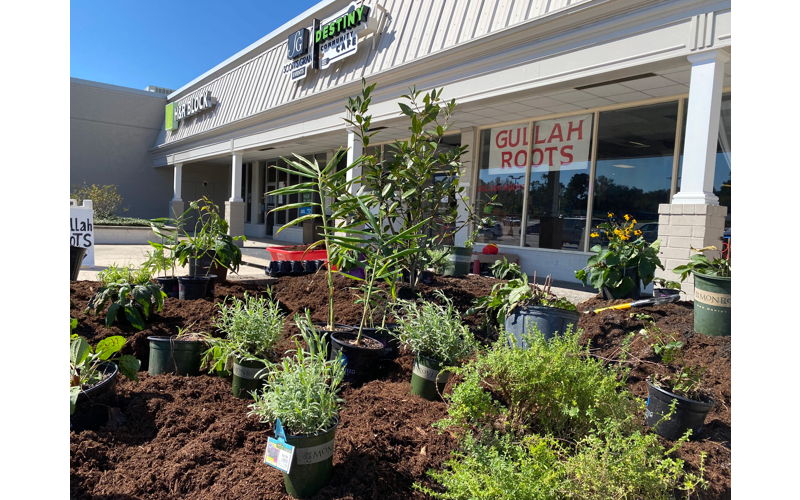 Destiny Community Cafe wants folks to learn more about Gullah Geechee farming techniques with its new garden, located outside the North Charleston pay-what-you-can establishment. The garden will provide herbs and produce for the cafe, but the goal of the space goes beyond providing nourishment for the community, cafe owner Ragina Saunders said.

“We’re really excited to cook with the fresh herbs and spices, and we’re going to turn it over as the season changes. We’ve always done fresh farm-to-table and now we get to do garden-to-table,” Saunders said.

Saunders opened Destiny Community Cafe at 5060 Dorchester Road in 2015, later joining international nonprofit One World Everybody Eats, which helps food vendors open pay-what-you-can eateries. Destiny was the first cafe under this nonprofit in the state of South Carolina.

JBJ Soul Kitchen in New Jersey, another One World Everybody Eats member that’s run by the Jon Bon Jovi Soul Foundation, was the inspiration for the garden, Saunders said.

“We went up to his cafe in New Jersey right when we first started Destiny. As soon as you walk up, you see this gorgeous garden and some raised flower beds. I didn’t think it was even possible until I saw his. When I got back to Charleston I was like, ‘I want one of those in front of our cafe.’”

It didn’t take long for Saunders to turn this vision into reality. With guidance from MUSC Urban Farm, Saunders and a large group of volunteers built a garden.

“Ragina had wanted to build that garden for five years I think, and it was just fabulous that they finally got clearance,” said MUSC farm educator Carmen Ketron, who described the garden as “whimsical, inspiring and utilitarian.”

“She came to us with all of these amazing ideas, and she really wanted to focus on the Gullah Geechee culture and how she could feed the people,” Ketron said. “We partner with another garden in Ghana, so we already had a lot of the long lasting perennial herbs and the plants that came over from West Africa and were naturalized in the Lowcountry.”

Plot gardening has been a part of Gullah Geechie culture for centuries, and the African cultivars found in a Gullah-inspired garden are representative of traditional foodways. The garden features medicinal and healing plants, vegetables and edible herbs. Sage, rosemary, coneflower, oregano, thyme, rosemary, lavender, kale, collards and broccoli are some of the ingredients that will find their ways on to the menu.

“Our volunteers all teamed up and we got a list from some of the Gullah Geechee elders,” Saunders said.

The fresh produce will help Saunders continue to feed her loyal patrons, many of whom are seniors and folks lacking transportation. She also hopes to teach others about Gullah Geechee ingredients, traditions and farming techniques.

“Our meals are inspired by Gullah Geechee recipes, and I think my ancestors right now are pulling at me to go back,” Saunders said. “Our ancestors, they helped to cultivate and grow America and we want to honor that.”

She said she plans to do this through socially distant outdoor activities like heritage plantings guided by Gullah Geechee farmers and herbalists, culinary classes and more.

The garden’s launch comes at a good time for Saunders and the cafe, which is only open three days a week due to the pandemic.

“We don’t have as many volunteers as we used to because of people staying in,” Saunders said. “We’re thankful for the people who have been donating all the extra things that we need right now. We’re not giving up.”