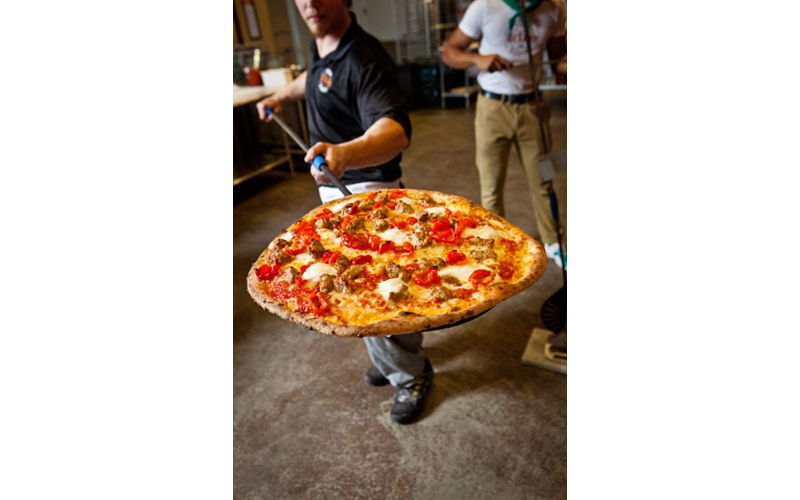 If there are rolling pins in the kitchen of DeSano Pizza Bakery, they are banned from all tasks except, perhaps, burning in one of the three ovens. Rolling pins and mechanical presses are never used to manipulate the dough, as that’s not the Neapolitan way. The pizza maker uses only his hands.

Forget about a pie spending six minutes on a conveyer belt, “slowly” cooking at 650 degrees. At Desano, the kitchen is equipped with three massive Grande Forni ovens with floors made of volcanic rock from Mt. Vesuvius, each named after a different patron saint of Naples: San Paolino, San Genarro, and San Felice. They all fire upwards of 1,000 degrees and cook a pie in under 90 seconds.

DeSano is not a member of the Associazione Verace Pizza Napoletana — an organization with an extremely strict set of rules that awards certificates of authenticity to pizzerias around the world — although you could infer differently from their menu and website. But we don’t really care. The pizza is damn good, and the pies adopt all the characteristics of the Neapolitan specialty. They’re soft, tender, and easy to manipulate and fold. The crust gets spotted with char as the pizzaiola — pizza makers — lift the pies to the top of the oven dome as they finish, creating a nice interplay of smoky bitterness and soft, mild dough. The outer ring of crust was a bit thick on our first visit, but subsequent orders had a thin, charred crust that resembles a well-prepared baked bread.

In Naples, a pizza is never pre-cut into slices, but here, it’s the American way. A true Neapolitan pizza will have a soupy center and the DeSano pies fits the bill nicely, but beware, slices droop and dangle, and toppings could make their way onto your lap. A simple fold or a fork and knife are the easy fix.

The pies come in two sizes — 10 and 14 inches — and range from $12 for the traditional Margherita to $22 for our favorite, the San Gennaro, topped with sausage, sweet peppadew peppers, garlic, buffalo mozzarella, and caramelized onions. The pizzas get delivered on metal cookie sheets and sides of extras — think fresh minced garlic, parmesan, and crushed red pepper — sit at a self-serve station not far from the ovens.

Don’t expect to create-your-own pie here, as the menu strictly states no substitutions and no half toppings.

Though the pizzas take center-stage, the calzone offerings are quite good. The Vesuvio ($14) gets packed with spicy salami, prosciutto, pepperoni, garlic, and marinara and the dark golden brown crust gets an ample treatment of Parmesan and chiffonade basil.

With all the focus on using strict standards to make a true Neapolitan pizza and calzones to order, it’s hard to believe the two salad offerings — spinach ($6.50) and caprese ($7) — come pre-prepared in plastic containers that sit in a cooler up front. The balsamic vinegar does come in a side cup and the salads are prepared daily, but even the friendly girl working the register made sure to clarify that the salads are pre-made when we ordered a caprese. The salad itself was decent, but the small amount of mozzarella and eating it out of a plastic to-go container made it not very memorable.

The space itself is enormous. From the freeway, the building resembles a large yellow warehouse with white letters on the roof spelling out, “DeSano Pizza Bakery.” It’s a bit confusing when first entering, because all the ordering is done up front in a closed off room, but that gives it the bakery feel they’re going for. Once an order is placed, patrons take their tickets to the big back room that doubles as both the kitchen and dining room with wooden community tables, high and low, spaced out across the room, each seat having a direct view of the ovens and a single TV that’s generally airing a soccer game.

Near the condiments, there’s a pitcher of water and some plastic cups, but up front there’s an array of bottled beer, macro and craft, and wine for sale. You can also bring your own wine (not beer) and they won’t charge a corkage fee.

A lot of restaurants these days strive to one-up competition by qualifying their products with words like organic, grass-fed, and VPN-certified. Personally, all that matters to me is that what I’m eating tastes good and makes me want to come back for more. I don’t know if the dough that DeSano makes has a final pH of 5.87 or a density of 79 grams per cubic centimeter, but their pies now set the bar for the Neapolitan pizza in the Lowcountry.