Days away from his next opening, the restaurateur behind Husk and McCrady’s is focused on the future 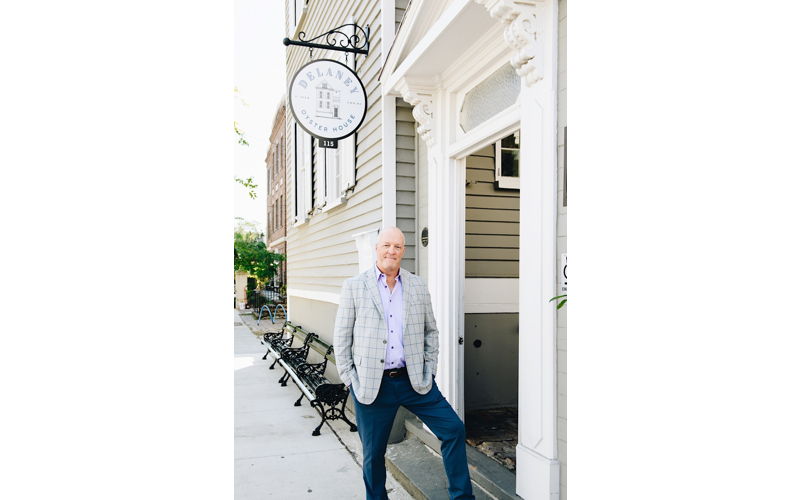 “What an amazing venue,” David Howard says. We’re sitting on the second floor piazza of the Charleston single house on Calhoun Street that is being transformed into Delaney Oyster House.

It’s the latest venture from Neighborhood Dining Group (NDG), the owners of Husk, McCrady’s, and Minero. Over the past two decades, Howard, the group’s president, has opened a long string of successful restaurants, and I wanted to ask him about process. Did he decide first that he wanted to open an oyster bar and set out to find a location, or did it come about some other way?

“I start with the space,” Howard says. In this case, the space fell into his lap. Hotel Bella Grace, the sleek boutique hotel next door, had already renovated the house, which was built in the 1830s, but they were just serving breakfast and cocktail-hour snacks in it. Howard and team did a two-hour tasting event there earlier this year, and, as he puts it, “a business opportunity presented itself.”

Nine years ago, when NDG converted a 19th century Queen Street mansion into Husk Restaurant, they had to strip everything down to the studs and start from scratch. “This time around,” Howard says, “I don’t have to spend a year or two years in construction.” The building already has a small kitchen, and the future dining rooms are in good shape, too.

They are adding more refrigeration and updating the equipment, but there’s not much they can do about the kitchen’s size. And that immediately set some boundaries. A giant wood-fired grill wasn’t in the picture, but a raw bar seemed doable, and the oyster house idea evolved from there.

“When you see this space, you can see why,” Howard says. We head up a narrow staircase with irregularly sized steps to the second floor, then snake our way through two small rooms with high ceilings and white-painted walls and out onto the piazza. We settle into wicker-backed chairs and look out across Calhoun at the sun-lit facade of Emanuel A.M.E. Church.

It won’t be big — just 60 seats — and the stairs, the small dining rooms, and the piazza preclude a more formal mode of service. “It’s a place where you can have more of a family style of tasting,” Howard says. “And not as much of a structured dining experience.”

The menu will focus on fresh seafood: local shrimp, caviar, North Carolina scallops, and, of course, plenty of oysters. “We’re trying to make it light and bright,” Howard says. “Not breaded and fried.” There will be, thank Jesus, no burger on the menu.

As we talk, Howard sketches a vision of the restaurant to come, and it starts not with the kitchen or the ingredients but with the guests. “Can’t you just see it,” he asks. “Sitting out here with friends, maybe sipping Champagne, passing around a plate of oysters?”

“Look at this building,” he adds, gesturing around the piazza. “We like these buildings that have character. Dining is about a lot more than the food … Husk would not have been nearly as successful if it was in a strip mall.”

It’s a good opening to ask Howard about how things are going with Husk, and he says that nine years in, they are as busy as ever. “At 5 o’clock we have 30 or 40 people waiting to get in, and it’s a one to two month wait for a prime time reservation.” He estimates that three quarters of the guests are from out of town.

For those who weren’t around in 2010 when Husk opened its doors, it’s hard to explain how much it rocked the Charleston scene and sent ripples across the country. All of the hottest culinary trends — fresh local ingredients, wood-fired ovens, pickling and preserving, bourbon and country ham — converged in what seemed an over-the-top explosion of uber-Southern cuisine. It catapulted Sean Brock from up-and-coming talent to international celebrity chef.

Howard knows that lightning is not likely to strike twice. “It was a once in a lifetime situation,” he says. And that brings us around to how NDG is navigating the post-Brock era, for it was just a year ago that the group announced that Brock was stepping away from the company and was working on a restaurant of his own in Nashville.

Brock was the epitome of the auteur chef — the driven, impassioned cook whose artistic vision and control extends far beyond the bounds of the kitchen. He made each of the restaurants seem an extension of his personality and culinary philosophy — indeed, of his brightly-tattooed left arm.

Indeed, NDG seems to downplay chef moves these days. No press release or Eater post announced in June that executive chef Wesley Grubbs had left Minero — NDG’s casual Mexican-themed restaurant — and Alex Yellan, a veteran of the kitchen who had stepped away to be chef de cuisine at Tu, was coming back to fill the role.

So far, all signs suggest that Yellan, who has traveled to Mexico City and steeped himself in the cuisine, won’t steer Minero in new directions but instead double down on the intense, novel flavors that have always been its hallmark. Early specials have included tacos layered with Rancho Gordo bean purée, charred baby octopus, and heirloom potatoes, with benne and chile peanuts as garnish. He recently received a shipment of very rare Chicatana flying ants — yes, flying ants — and incorporated them into fried tomato salsa and marinated queso de Oaxaca.

It’s a similar story at McCrady’s, the group’s high-end tasting menu-only restaurant. When executive chef Jim Stein was dismissed in March over a personnel matter, no replacement was announced. And perhaps it doesn’t matter. “Interestingly,” Howard says, “no matter who the chef is, the staff have done a terrific job. They’re fully invested in that concept. These are individuals making decisions about excellence.”

The new kitchen at Delaney Oyster House will be led by Shamil Velazquez, who was the sous chef at Husk Greenville. He’s spent the summer working on menu ideas and traveling up and down the coast, visiting potential purveyors and sampling their catches (you can check out where he’s been on Delaney’s Instagram).

Velazquez’s culinary skill was one reason he got tapped, but Howard points to something more important. “Shamil is the chef in this restaurant primarily because he’s a great guy,” Howard says. “He’s a wonderful person, and I’m only interested in working with wonderful people at this point of my career.”

That afternoon on the piazza, Howard hadn’t said much about the group’s other Charleston restaurant, McCrady’s Tavern. A few weeks later, a press release announced that NDG was ending service at the Tavern on July 31 and putting the building at 2 Unity Alley up for sale.

“We’ve had some challenges,” Howard admitted when we caught up by phone. “Over the years I’ve applied every idea I’ve had with how to increase that business and make it more viable.”

The most recent idea, executed 18 months ago, was to split McCrady’s Restaurant in two. The more ambitious tasting menu was moved into a small space fronting East Bay and christened simply “McCrady’s.” The main dining room off Unity Alley was renovated and rebranded as McCrady’s Tavern, with a more traditional appetizer and entrée menu.

“I just don’t think that we got it where we can see a long term viability [for the Tavern space],” Howard says. “We’ve been there 13-plus years, and it’s just time for us to move on. It’s not an easy decision. I have such respect for the history of the building and for our staff.”

Three buildings comprise the McCrady’s-Minero complex: 153 East Bay, which houses Pearlz Oyster Bar on the first floor and Minero on the second, and the adjacent 155 East Bay, the location of McCrady’s tasting room. McCrady’s Tavern is behind them at 2 Unity Alley, a 9,500-square-foot colonial-era building that was once Edward McCrady’s tavern, where George Washington was entertained at a banquet in the long room upstairs in 1791.

“We’ll close the connecting doors and just lock them,” Howard says. “Like it once was before we purchased the two other buildings.” Both Minero and McCrady’s have their own kitchens, and the restaurants will retain the rooftop garden on the third floor of 153 East Bay.

As for the rest of operations, Howard says, things are “full steam ahead. This will let us hyperfocus on McCrady’s. That restaurant does well. It certainly is an amazing experience, and we need to continue inviting people to dine with us. I have the best culinary team and the best hospitality and service in the state.”

As for the forthcoming Delaney Oyster House, workers were hanging the new sign the morning I spoke to Howard about the Tavern’s closing. For Charleston restaurants, all opening dates are tentative, thanks to the unpredictability of contractors and permits. But Howard says the kitchen hoods are in, they are finishing up the interior design, and anticipate welcoming the first guests sometime in the month of August.