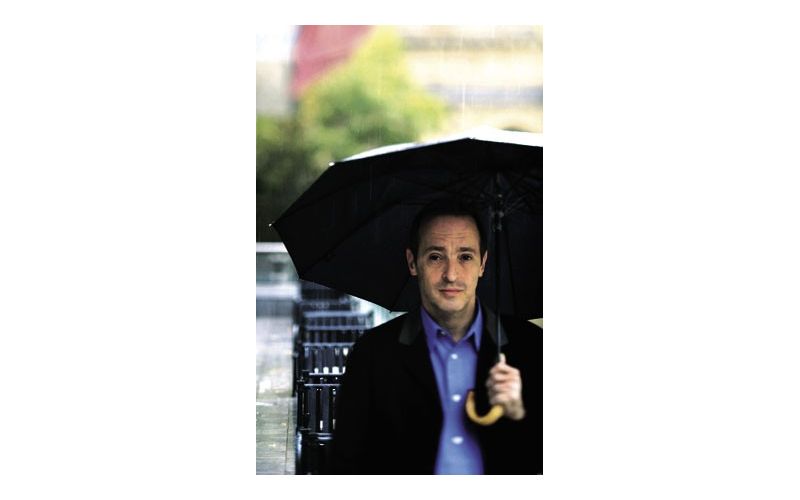 “I wish I was this articulate this morning on Morning Edition. I was a nervous wreck,” David Sedaris confided during our lunchtime phone interview. Over the phone, Sedaris’ trademark lilt sounds slightly higher and more vivacious than on the deadpan public radio commentaries that made him one of America’s most popular humorists.

Sedaris specializes in such an arch, caustic form of comedy that it’s difficult to imagine him being jittery. Ever since his essay “The Santaland Diaries” became an NPR hit in 1992, Sedaris has recounted funny stories of his childhood, family, and present-day experiences with unflappable cool. And he doesn’t merely prepare his best-selling personal essays in the privacy of European homes to record them in soundproofed studios. Sedaris eagerly plays to rockstar crowds, and his live appearances drive crucial aspects of his creative process.

“If I couldn’t perform, I would lose a lot of enthusiasm for writing,” he says. “I really look forward to reading out loud. Rhythmically, I write to read aloud, so one sentence can connect to the next and it won’t be choppy.” His latest book, a collection of sharply satirical animal stories called Squirrel Seeks Chipmunk: A Modest Bestiary, developed from his reading tours.

“About seven years ago, I wrote [the collection’s first story] ‘The Cat and the Baboon.’ I tour twice a year and I tried to write at least one new one for every tour, so hopefully it would eventually be enough for a book. I wanted to have 25 stories, from which I could choose 15 for the book, and that’s how it worked out.” With Squirrel Seeks Chipmunk, Sedaris takes a role comparable to Aesop, only if the ancient Greek wrote about such subjects as a mouse and a cat at the same prison AA program or a cheapskate cow who chooses the turkey for a farm’s Secret Santa so she won’t have to buy him a present. Uproariously funny and occasionally grisly, the stories contain vital lessons for judgmental, self-absorbed grown-ups.

“I love books on tape, and a friend gave me a book of South African folk tales. But the ones on the tape were a little too simple. For instance, a woman marries a zebra because she wants a lot of children. But it turns out that you can’t have children with a zebra. I was so disappointed in them I started writing my own.

“The thing is, the morals haven’t changed, because we still have the same sins. Don’t be greedy, don’t be selfish — none of that has changed. We haven’t invented new sins. We’ve just invented new tools to commit them with, so every time a new tool is invented, the stories recirculate. Asshole behavior with a cell phone is just asshole behavior.”

Sedaris’ autobiographical stories, however pointed, tend to be subtly sweetened by his affection for his family, his husband Hugh, and his appreciation for quirky individuals. Squirrel Seeks Chipmunk cuts those personal ties and reminds readers of how merciless Sedaris’ comedic vision can be, although the last three tales end on more hopeful notes. Sedaris attributes the book’s darkness to the nature of the form and his own artistic instincts.

“I think any sort of morality tale ends in death. Someone doesn’t learn the lesson and dies, or someone learns the lesson and dies a second later. And some of it is just me. Someone read the story ‘The Migrating Warblers,’ and asked, ‘Why did you have to have the heads rotting in the sun?’ I said, ‘That’s just what makes me me. If you did it, maybe the story would have sunflowers.’ ”

Sedaris believes that his autobiographical writing reveals fewer confidences than readers assume. “I think there’s a misconception that I have no private life, but it’s an illusion. I have never written one word about my sex life. None. I never felt like I sold my self-respect or my integrity. People often ask at readings how my family feels about my work, but usually they ask the question like they want to get a laugh themselves, like ‘How has your family not burned your flesh off?’ Once a woman asked a question like that and really got on my nerves, so I asked, ‘What do you think you know about my family?’ I’ve never divulged any secrets about my family.”

On the other hand, if you’ve read When You Are Engulfed in Flames or Me Talk Pretty One Day, you may wonder if he successfully quit smoking and mastered French. (Answers: He still doesn’t smoke and now primarily lives in England and studies Japanese.) Plus, being his own protagonist provides certain literary shortcuts.

“The advantage is that since my audience knows me, I can tell the story of getting my dental implants, say, without starting from scratch and explaining who I am every time. Whereas, if I’m introducing a new character getting dental implants, I’d have to provide backstory and physical description,” Sedaris says. “People have said before, ‘How much of a narcissist can you be?’ But I don’t think I’m any more narcissistic than someone writing fiction with invented characters. You still want to impose yourself on the world and receive recognition.”