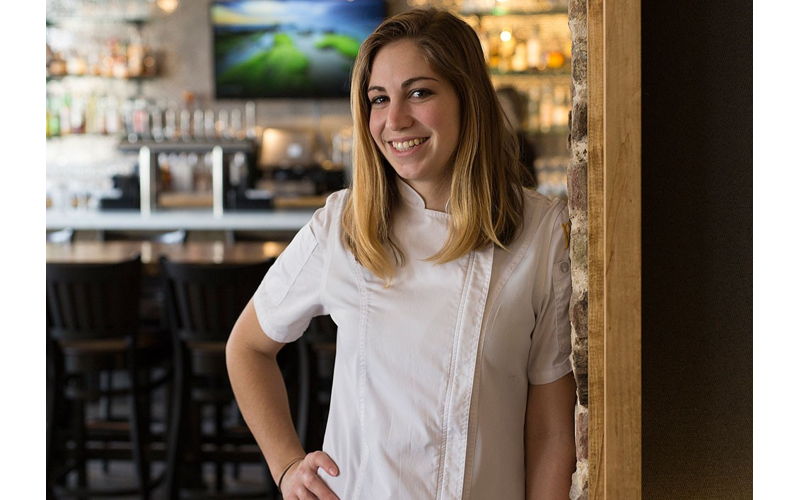 Charleston is such a foodie town that chefs are hiding in plain sight, out of the James Beard limelight, but still very much creating amazing food. This series profiles Charleston’s “hidden chefs.”

Growing up in Pennsylvania, DaVee Harned used to make sugar cookies “using every sprinkle on every cookie,” she says. Now, as pastry chef for Pawpaw, “I’ve refined my décor,” she says. After moving to Charleston in 2014, Harned worked at Wildflour Pastry and then became pastry chef at Stars. A “quarter-life crisis” sent her home to live with her parents for a year, but when she heard about Pawpaw, she came back to work with Chef Jared Rogers, who knew of her work from Stars. Despite not being from the South, Harned has tackled that Southern staple, the biscuit, and her salt-dusted pillows are standouts that earn their own spot on the menu. Pawpaw sells more than 100 of the biscuits a day on weekends. “I went to Johnson & Wales in Charlotte. That’s Southern, isn’t it?” she asks, adding that the only reason she can think that the biscuits are so popular is “just the love that goes into them.”

Favorite kitchen tool or gadget: My bowl scraper. I have little plastic ones that get everything out of the bowl. I use them every day and I’m constantly losing them and having to buy more.

Three things always in my pantry: Cereal, pasta, rice. I love my carbs.

Favorite after-work hangout: We always go to Carmella’s. It’s right across the street. I used to go to Warehouse. They have the best brunch and the bartenders aren’t bad-looking, either.

Favorite Charleston restaurant other than yours: Indaco. We go whenever my parents are in town. It’s my dad’s favorite.

Favorite smell: Cinnamon. I guess it’s typical of me to say so, but cinnamon rolls are my favorite.

Favorite drink: Mimosas. You can’t be sad drinking a Mimosa.

Most under-rated ingredient: Salt. Salt is as important in baking as it is in on the savory side. People focus on sugar in desserts, but if there’s no salt, it ruins everything. It’s why I put salt on the tops of my biscuits.

Favorite meal to cook at home: Spaghetti. It was my dad’s go-to; we probably had pasta four times a week. It’s a lazy picatta sauce, just butter, lemon juice, and beef bouillon powder.

Best advice a mentor gave you: I didn’t grow up in a typical food town. People would go to Friday’s or Olive Garden. But when I told my mom what I wanted to do, she said, “Follow your dreams.”