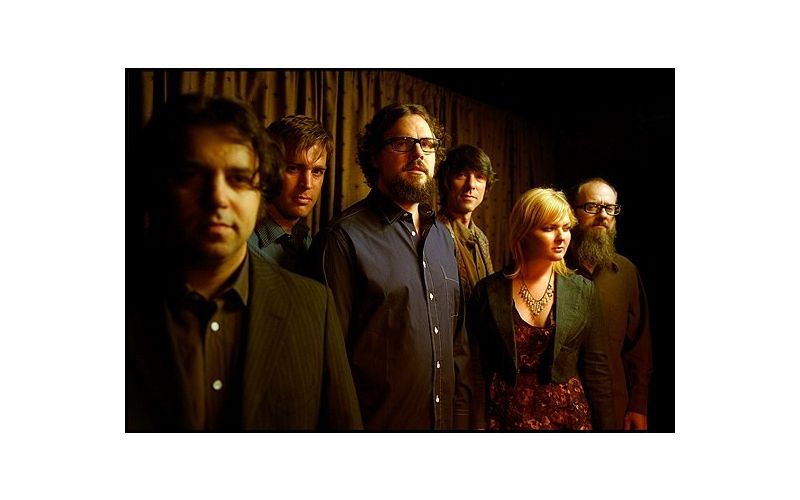 Patterson Hood talks about Capote, Waits, and a brutal murder

Patterson Hood is not afraid of the dark. In fact, the Drive-By Truckers leader is compelled to write songs that tell tales of violence, greed, and the abuse of power. On Go-Go Boots, their latest album, Hood and the gang turn down the amps and, once again, embrace their classic story-driven style.

“I don’t know why I’m attracted to these dark things,” Hood says from his home. “Maybe in another life I should’ve been a filmmaker. I would have made these little noir films. I like telling a good story, and a lot of the stories I like tend to be kind of dark.”

Hood continues to talk about his inspirations. “What draws anyone to anything, you know? What drew Truman Capote to the In Cold Blood story? Instead of doing something that would make sense like writing a book or a screenplay, I put it in these songs,” he says. “I’ve heard Randy Newman say that people have told him the things he writes about don’t make good songs, which I disagree with because I love Randy Newman, but people have said that to me too — ‘Why are you writing about these things in songs?’ Who knows, maybe we should have been novelists.”

One story that appeals to Hood’s fascination with dark subject matter concerns a preacher who had his wife killed near the singer-songwriter’s hometown of Muscle Shoals, Ala., in the late ’80s. It’s a tale that Hood chronicles on two songs from Go-Go Boots, the title track and the long, eerie “The Fireplace Poker.” “They are about the same story, but from a different perspective,” says Hood. “‘Fireplace Poker’ is really close to the way it went down, but when people talk about things, they get changed, so ‘Go-Go Boots’ is more about the townspeople’s gossip about the actual thing.”

Hood isn’t the only storyteller in the Truckers. Co-founder and guitarist Mike Cooley, the laid-back yin to Hood’s perpetually excited yang, tells his share as well, and while they’re certainly not happy, they’re definitely beautiful.

“Pulaski” tells the time-worn tale of a small-town girl moving to L.A. and the disillusion that comes with it. Cooley’s perfect country tone meshes with his songwriting so well that it’s hard to imagine anyone else singing the song. And “The Weakest Man” could have been recorded alongside Waylon Jennings’ “Where Corn Don’t Grow;” the restrained but twangy guitar line and Cooley’s deep melodies share a space in time with Jennings’ classic song.

The band’s current lineup — with Hood, Cooley, and bassist Shonna Tucker sharing songwriting and singing duties, Brad Morgan on drums, John Neff on guitar and pedal steel, and Jay Gonzalez on keys — has reached an unprecedented level of chemistry. And this chemistry shines through again and again, from the melodic background solos to Gonzalez’s vocals on “Assholes,” which covers the tumultuous relationships the band has had with record labels.

“I’ve heard people say that’s a vindictive song,” Hood says. “But it’s not as much a calling out as maybe a defense of why we say some of the things we do. After all, I do say we’re the assholes.”

And Hood and his bandmates are in good company. “Tom Waits was inducted into the Hall of Fame the other day, and he said, ‘They say I’m difficult to work with and I don’t write hit songs … like it’s a bad thing.’ And I just loved that,” Hood says. “And anytime you have a two-part harmony that sounds really pretty where the chorus is saying ‘assholes’ over and over, that’s awesome. Maybe that’s why I’ve never written a big hit song.”

Last year, the band was asked to record two songs for a tribute to the late Eddie Hinton, a legendary but troubled soul musician and songwriter from Muscle Shoals. They recorded the tracks in the middle of the Go-Go sessions, and it had such a profound impact on the band that they decided to include them on the album. The two Hinton songs produce the happiest track on the new record, “Everybody Needs Love,” and the saddest, “Where’s Eddie,” which is beautifully sung by Tucker.

Whether it’s from Hood, Cooley, or Eddie Hinton, storytelling defines the record. It’s a trait that has always set the Truckers apart.

“There’s definitely a strong storytelling tradition in the South, and there was a couple of really good storytellers in my family growing up,” said Hood. “I had this great uncle who was sort of the family historian, and, every year at Thanksgiving, he’d break into these incredible stories. I guess I’ve inherited that position in the family as a storyteller, but they have to hide the kids for mine because I’m also the heathen black sheep of the family.”