Darius Rucker’s latest is a love letter to Charleston 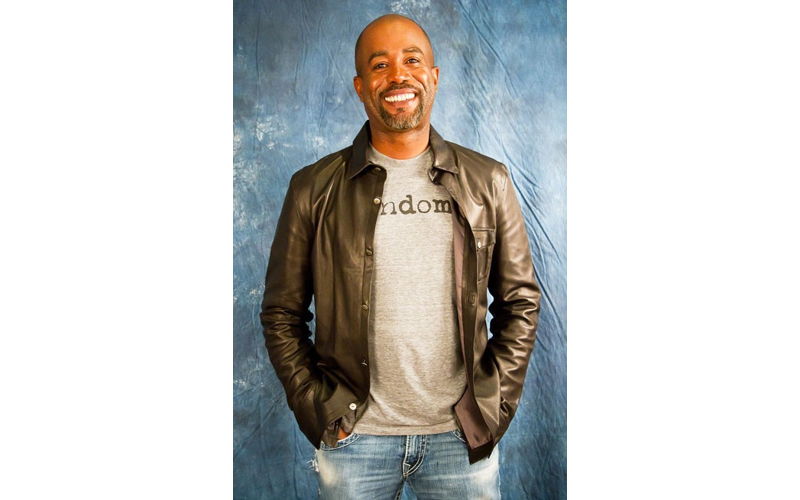 It’s always ideal to chat with big-time musicians when they’re relaxed and undistracted by fans, agents, or immediate performance obligations. When City Paper met with Darius Rucker two weeks ago at Chucktown Music Group’s downtown office, the songwriter beamed with cheerfulness. It was the eve of the Pro-Am Jam, a collaborative post-golf tournament benefit concert at the Daniel Island Club hosted by Rucker’s Hootie and the Blowfish bandmate Mark Bryan.

“I played a nice round of golf at the Bulls Bay Golf Club ­in Awendaw this morning,” Rucker says right off the bat. “So I feel pretty good right now.”

In addition to his golf game, Rucker has a few others reasons to be upbeat.

The 45-year-old Charleston native’s latest album — a thematic, contemporary country collection titled Charleston, SC 1966 — topped the charts and earned critical acclaim and commercial success over the last year. Lyrically, the songs on the album are more biographic, revealing, and intimate than most of his previous country and rock efforts. He seems genuinely content with life and confident about his musical endeavors.

“I feel about Charleston the same way Springsteen felt about New Jersey,” he says. “I don’t think he ever sat down and said, ‘I’m going the make the whole world know I’m from Jersey.’ But it happens when you sing about where you’re from and who you are.”

The title of Rucker’s new album is an obvious reference to his hometown, the year of his birth, and a tribute to veteran roots/country songwriter Radney Foster’s 1992 debut, Del Rio, TX 1959.

“I knew I was going to name one of my records for Charleston one day,” Rucker says. “Charleston is so embedded in my music and who I am. It’s so much a part of me.”

Rucker grew up in a musical family in West Ashley, graduating from Middleton High School before enrolling at the University of South Carolina. He currently resides in Awendaw.

“When I was here, writing the songs for this new record and doing things, the place became a part of the music, too,” he says.

Throughout the album, Rucker touches on Southern manners, old-school family values, country cookin’, general friendliness, and the slower pace of life. His accent sounds more Upstate-flat than Geechee on most of the choruses.

“For me, I didn’t try to write about Charleston specifically, but I’m glad everyone knows I’m from the greatest city in the world,” he says. “The themes on this album can be about Charleston, but can also be about Pikeville, Ky., or anywhere, really.”

The initial sessions for Charleston, SC 1966 began with a pile of sketches of more than 70 songs to sort through. Rucker worked with some of Nashville’s strongest songwriters, including Brad Paisley, Ashley Gorley, Frank Rogers, Kara DioGuardi, and others. Their brainstorming and self-editing paid off.

In gradual succession, the record spawned three Top 10 singles, including “Come Back Song,” “This,” and Rucker’s latest, “I Got Nothin’,” one of the more melancholic love ballads of the bunch.

“The lead-off single [“Come Back Song”] was actually the last song we wrote for the album,” says Rucker. “You never know what you have until you put it all together and start the recording process.”

From the sentimental ballads to the twangy rockers, there’s an overlap of contemporary alt-country, pop-rock, and traditional country. It’s mild and formulaic at times, but consistently earnest. The tunes click with old and new fans. In fact, Charleston, SC 1966 is really a natural continuation of the melodic roots-rock formula he’s used since Hootie’s heyday.

“I think I’d be lying to you if I said I was aiming for anything in particular,” Rucker says of the new material. “I got lucky with some songs that were good. That’s the great part of making the music I’m making. I just get to be me.”

Rucker worked plenty of Lowcountry imagery into his latest music videos, too. Scenes from Charleston’s historic downtown neighborhoods and landmarks, area beaches, and rural outposts provide the backdrop for the clips.

He says, “If it was up to me, all my videos would be shot in Charleston. I’d be home, and I’d get to go out and about around the city.”

In 2002, Rucker made a brief foray into traditional soul music with a solo record called Back to Then (originally titled The Return of Mongo Slade), but he stayed out of the spotlight until 2007, when new compositions started veering into a country/Americana vein.

Rucker’s initial success in the modern country music market began in 2008. Earlier that year, he announced that Hootie and the Blowfish would be going on an amicable hiatus so that he could pursue a solo career as a country music performer. He confirmed that Hootie would continue to perform occasional charity concerts and special events.

Rucker then surrounded himself with top-shelf musicians and adjusted to being a genuine frontman and bandleader, as opposed to his role as a Hootie bandmate.

“Hootie was about as much of a band as any band could be,” says Rucker. “It was four guys making all of the decisions together. If two guys vote against you and the third guy abstains, you lose, you know? As a solo act, it’s really different and really fun, and it’s all on me. At the end of the day, no matter what happens, all of the decisions are mine. It’s something I hadn’t done before.”

“I got right off of a Hootie tour and met all these guys when the work started for Learn to Live,” Rucker says. “It was weird at first, but we clicked immediately. We’ve been playing together now for four years, so it sounds tight.”

In 2008, Rucker released his country debut Learn to Live on Capitol Records. It immediately hit the top of the country radio and sales charts — a rare feat for an African-American artist. Learn to Live produced three consecutive No. 1 singles: “Don’t Think I Don’t Think About It,” “It Won’t Be Like This for Long,” and “Alright.”

“You see a lot of people doing a one-off, saying, ‘This is my country record,’ but this is a career I’m trying to build,” Rucker told Billboard magazine upon the album’s release. “The people that say that they don’t get it, I’ll let the music speak for itself. I plan to do a lot of country records.”

Learn to Live earned him the New Artist Award from the Country Music Association, among other music industry accolades.

Rucker wasn’t necessarily looking for big success with his detour into country music. He simply wanted to write songs, make records, and put them out.

“I wasn’t looking to sell a million records,” Rucker says. “I was just writing songs for me. I didn’t know it was going to do what it did. I was trying to be happy with the record I’d made, and I was trying to make something I’d want to listen to myself.”

Rucker spent much of 2010 touring North America and Europe with country superstar Brad Paisley on what they called the H2O World Tour. They played major festivals, amphitheaters, and coliseums through 2011. Rucker returned to Charleston over the summer for shows on Daniel Island with Hootie and the Blowfish at their annual Homegrown Concert at the Family Circle Magazine Stadium. The events raised funds and supplies for the Hootie and the Blowfish Foundation, a private nonprofit organization that funds music programs at S.C. schools.

Rucker admits he’s a little bit intimidated by his rapid ascension in the country music ranks, but he felt more confident with the recording and release of Charleston, SC 1966.

“For me, it’s like an evolution of what I’m supposed to do,” he says. “It wasn’t so much about coming back from somewhere else. It was simply about going where I felt like I was supposed to go.”

Rucker seems to handle his fame and celebrity with ease and confidence. While he is attached to a major label, he enjoys an enviable position of independence as a songwriter. There’s little pressure to maintain his new audience or hit-making streak.

“I’m at the point to just do what I do,” he says. “I’m at the Jimmy Johnson-Nick Saban point. It’s either going to work or it’s not going to. I’m just going to be me, and, hopefully, it’ll keep working. I don’t worry about trying to attract or keep an audience as much as I worry about making good records.”

Rucker and his backing band have established themselves as a solid live act over the last four years. They consistently draw huge crowds from coast to coast. More road trips are on the horizon, too. Rucker and Paisley reunited this summer for the H2O II: Wetter and Wilder Tour, which kicked off at London’s O2 Arena and pressed through Ireland, Norway, Sweden, and Denmark.

Touring can be tedious and exhausting, but Rucker thoroughly enjoys performing as a solo act with a great band. “I haven’t headlined a tour since Hootie, so to say I’m excited is an understatement,” he says. “It’s been such an incredible experience to tour with Paisley and Rascal Flatts [earlier this year], and I’ve learned a lot being on the road with them. With this tour, I’m just excited to perform again for our fans.”

In support of Charleston, SC 1966, Rucker heads to the North Charleston Coliseum on Sat. Nov. 12. It’s his first-ever headlining show at the Coliseum. He’s both thrilled and nervous to perform at the venue, which wasn’t even around when he was growing up.

Hootie and the Blowfish played there two nights in 1995, shortly after it opened. They filmed the video for the hit song “Time” (from Cracked Rear View) during one of the concerts.

“Hometown gigs always make you nervous, because all of your friends and family are going to be there — the people that really know you and remember you saying, ‘I’m going to be a singer someday.’ ”