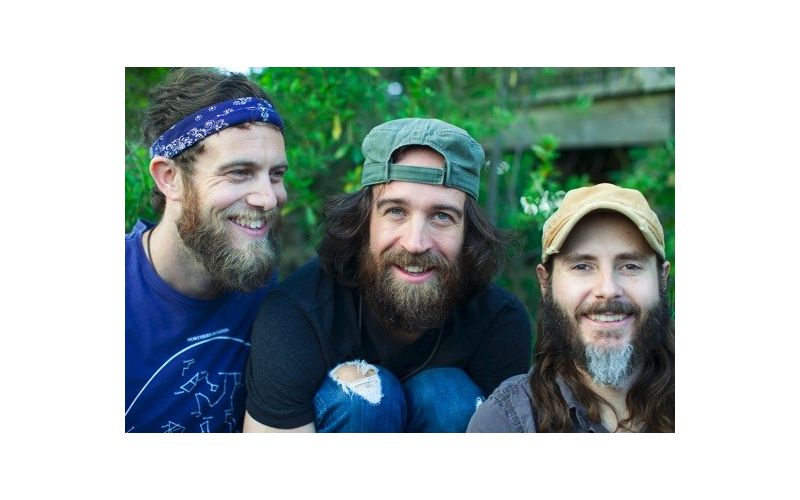 Dangermuffin enjoys an exalted reputation for their groovy, rootsy style, but Dan Lotti, Steven Sandifer, and Mike Sivilli dig a bit deeper into the soul and mind on their new album Olly Oxen Free than even their biggest fans might have expected.

“We’re not aiming for anything specific,” says lead singer and acoustic rhythm guitarist Lotti. “We’re just going for what we enjoy.”

After working up new material over the last two years, the trio recorded the 13-song Olly Oxen Free in January with engineer Majeed “MJ” Fick at Truphonic Recording in West Ashley. The collection follows their well-received 2010 album Moonscapes. If the previous album demonstrated a solid configuration of musicians and a mess of cool guitar licks, the more mature Olly Oxen Free finds them at the peak of their creativity and confidence.

“We did a lot of [pre-production] work in our home studio, tracking guitars and rhythms, listening back, and adding lyrics and bits,” Sivilli says. “It was a methodical, year-long process.”

Leading up to the studio session, the bandmates worked collectively on basic song ideas, arrangements, and rhythmic transitions. They each chimed in with constructive criticism for each others’ solos and fills.

“We weren’t necessarily shooting for anything thematic, but we definitely wanted the strongest songs to flow in a concise set,” Sivilli says.

The title Olly Oxen Free is a curious reference. Sivilli explains that the phrase was originally something close to ‘All ye, all ye outs in free,” adding, “It’s like a hide-and-seek or capture the flag type thing. It’s yelled at the end of the game.”

Drummer Sandifer finds deeper meaning in the album title — a declaration that reflects the balance of styles and lyrical ideas in the music. “It’s kind of like a marriage between the playfulness of the music on the album and the very seriousness of ‘all ye be free,’ like come out and be free and be yourself,” he says. “There are so many playful grooves and elements of different genres in there, but there’s a heaviness there as well.”

The sophisticated character of Dangermuffin’s new compositions evolved from something much more simple and straightforward. Sivilli and Lotti first started playing as a guitar duo under the name Dangermuffin in 2005. Eventually, they lured veteran percussionist Sandifer into the lineup. He emerged as the band’s secret weapon with an impressive dexterity and technique on the drum kit, plus a bonus ability to switch to upright bass. With Sandifer handling bluegrass, blues, and country bass lines on the big four-string, Sivilli and Lotti enjoyed more space to play and harmonize.

In recent years, Dangermuffin stirred a wide variety of influences into the music, mixing bits of jazzy blues and rip-snoring bluegrass into a strummy style of folk-rock. They handled reggae or Latin rhythms with ease, and they cranked it up like the Stones and rocked with no problem.

On the new album, Sivilli’s tasteful solos veer away from the blues Duane Allman licks of previous works. The jazziest moments bring to mind the expressive styles of such guitar wizards as Steely Dan’s Walter Becker, Fleetwood Mac’s Lindsey Buckingham, and British veterans Richard Thompson and John Fahey. There’s a touch of Django Reinhardt, too. Sivilli’s sparse and expressive solos on the slow-burning “Loneliest Highway” and the misty and hypnotic “200 Degrees” demonstrate his most delicate touches. Sandifer’s syncopated shuffle beat on the opening song “Slumber” would make a classic Latin-funk drummer like Steve Gadd grin. “Cradle of the Beach,” “Rattle That Cage,” and “Sea Funk” rumble with equally spicy samba rhythms and accents. His Latin patterns pop up throughout the songs.

“Some of the songs with samba rhythms started with the drums,” Sandifer says. “In those weird, boring moments when sound checks are taking too long or something, I tend to come up with something new on the drums. I’ll start tapping a pattern, and it suddenly becomes a cool beat that ends up in a song.”

The ska/reggae beats of the clickety, soulful “Battle” and the slower, moodier “Circle Bird” add an Afro-Caribbean flavor to the mix with effortless grace. The spirit and sound of AcousticMuffin, the trio’s unplugged alter-ego, show up on a couple of tracks, too. It’s a brilliant move.

The mid-tempo instrumental “Jaula” and the slide guitar-tinged “The Rising Souls” — the two AcousticMuffin-style songs — stand out as the most country/bluegrass tunes of the bunch. Lotti and Sivilli both played acoustic guitars and sang in harmony while Sandifer handled the bass lines.

“We recorded the all-acoustic stuff a hundred percent live with no overdubs,” Sandifer says. “Much of the album was like that, with just a little bit of extra guitar thrown over the top. It’s part of an overall organic approach.”

Sivilli predicts that a merging between Dangermuffin and the band’s acoustic side project is likely over the next year. “They’ve been separate entities over the years, mainly so that we could play locally as AcousticMuffin, but at some point, they’ll become the exact thing,” he says. “It’ll only be a question of whether Dangermuffin is playing acoustic or plugged-in.”

Meanwhile, the band is eager to release the new album and perform around the country, mostly as a plugged-in, highly adaptable, tightly knit power trio. For frontman Lotti, putting the new songs out and gearing up for a big summer tour is part of a greater effort to spread some good vibrations and optimism.

“To me, Olly Oxen Free really stands for hope,” Lotti says. “I feel as though music and art needs to tell it like it is, and this record is my way of telling it like it is. Songs talk about the state of our society and how we have such little time left to correct our frivolous ways, or about how the mystery of life can be solved by seeing what’s in plain sight. Songs deal with starting over, which we may all need to do soon. I just want to get the point across that there is hope.”