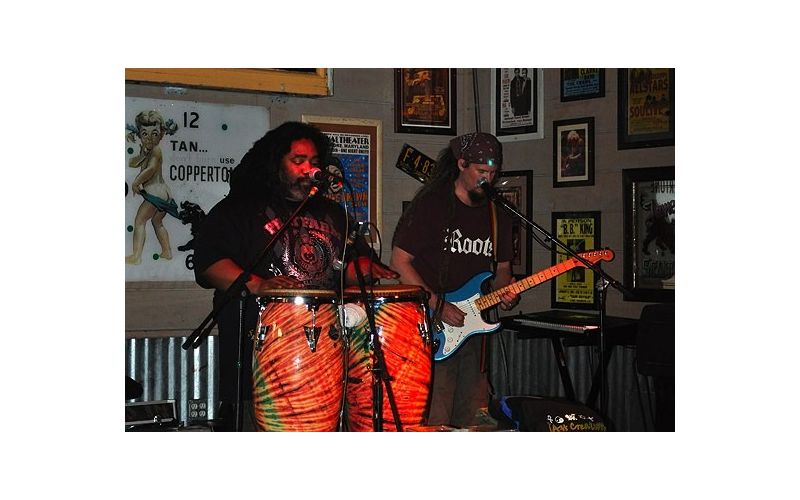 Steeped in roots reggae vibes, laid-back Rastafarianism, and a Lowcountry perspective of African-American culture, Charleston’s long-running Da’ Gullah Rootz is something of a local musical treasure. Fronted by singer General Top Rank’n Geecheeman (born J.L. Jenkins), the band has been jamming in town and along the East Coast for more than a decade.

The band is at ease mixing elements of funk calypso, rub-a-dub, and dancehall flavors into their reggae rhythms.

“Tony McKie [the club talent buyer and co-owner] told us that he was really interested in doing something for the Sullivan’s Island people and bringing some reggae vibes over there, too,” Rank’n says. “We hadn’t played in that spot since the old Bert’s Bar days.”

Da’ Gullah Rootz started performing in Charleston in 2001 with Rank’n on vocals and hand percussion and Jerome “Gits” Graham (formerly of Shaman Mary) on guitar. The rhythm section and various guest horn players changed quite a bit over the years.

“We all came from a lot of different musical backgrounds, but roots is the basic foundation of what we deal with,” says Rank’n. “We’re able to take a little bit of this and a little bit of that and mix things up. That’s why we have our own identity.”

Rank’n recently started collaborating on stage with three members of Wilmington, N.C.-based reggae group Jah Creation. With Jimmy Jams on vocals, keys, and horn, Carlos International on bass and guitar, and Ras Cube on drums and percussion, the trio could easily slide in as a full rhythm section for a Gullah Rootz gig.

“We’ve got a nice little crew, man — first-stringers and second stringers, too,” says Rank’n. “It’s a rotation of players out on Sullivan’s Island. We try to get everybody in on the gigs. Sometimes, we’ll have six or seven pieces. Sometimes, me and Jimmy Jams will do a duo thing, with him handling guitar loop pedals and laying down the drum tracks.

“This thing we have going with Jah Creation is great,” Rank’n adds. “It’s like a two-headed reggae monster. We try to keep that original style going, and we have the capability to mix it up a lot, too.”