Cyclists getting a bike lane along Chapel Street 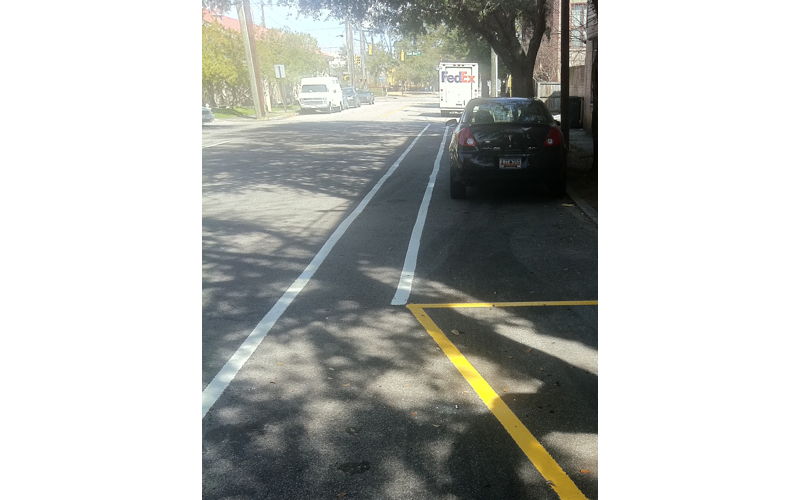 Cyclists who routinely ride down Chapel Street through the historic Mazyck-Wraggsborough Neighborhood are getting a little bit of asphalt to call their own.

Although not quite as wide as a standard bike lane, the new paths will be three-feet wide, enough to separate cyclists from the neighborhood’s parked cars and the traffic on the roads.

Tom Bradford, director of the bike advocacy group Charleston Moves, was at the announcement with a camera around his neck and a big grin on his face, looking like a proud papa at a graduation ceremony. He says the guide markings are an important first step toward a more bike-friendly city.

“The city now depends on bicycles increasingly as a serious mode of transportation, not as playthings,” he says. “We hope this is just the first in many steps for an entire network of bike paths and share roads throughout the peninsula and beyond — through all of Charleston.”

The Garden District neighborhood has been lobbying for improved bike access for more than four years. According to Vangie Rainsford, president of the Mazyck-Wraggsborough Neighborhood Association, the need for bike lanes is a quality of life issue for residents.

“It creates a more sustainable, healthy, quiet environment,” she says. “Our Garden District will be opened up more, encouraging more bikers to come through our neighborhood and see things from a bicycle as opposed to a car or a bus.”

The city will evaluate the effectiveness and use of these bike lanes, says Traffic Director Hernan Pena, and then look at putting similarly wide routes through the Garden District, possibly including Alexander, Elizabeth, and Ann streets.

“The intent is to limit the impact on parking and improve the safety for cyclists,” Pena says of the challenge in creating room for cyclists on other popular bike routes like St. Philip Street or high-traffic avenues like Broad Street.

In order to accommodate the three-foot bike lanes, as well as on-street parking and two lanes of traffic, a road has to be at least 40 feet wide. Pena adds, “Most of our streets just don’t have the width.”

This summer, the city plans to create bike lanes along St. Andrews Boulevard in West Ashley from Sycamore Avenue to Wesley Drive. After that project is complete, the city will turn it’s attention to Morrison Drive, home to the City Paper‘s office. Since the city already has plans to resurface the road in the coming months, officials felt it was a good opportunity to look at creating a possible bicycle route along Morrison.

The striping along Chapel and John streets is expected to be completed in early March and cost $5,000. The lanes will eliminate four on-street parking spaces that run along the Chapel Street Fountain Park.