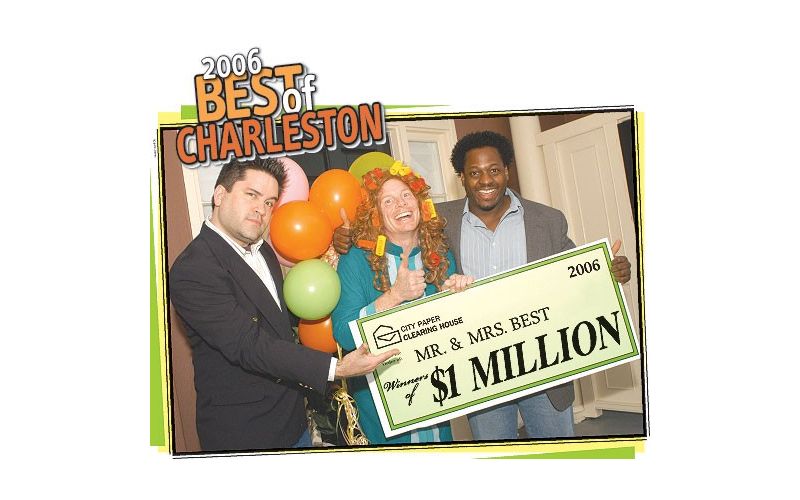 What’s better than a home visit from PUBLISHERS CLEARING HOUSE?

This edition of the Charleston City Paper’s Best Of 2006, detailing the best reasons to live right here in the Lowcountry. It’s the BEST!

Accountants, huddled together in an underground chamber for the past month, have TABULATED our annual BEST OF CHARLESTON Readers Survey, in which ordinary readers like you (WINNERS!!!) sent in THOUSANDS of completed survey forms available in our FANTASTIC PUBLICATION and at our (not yet) AWARD-WINNING WEBSITE.

The results are printed here in these very pages, along with a compilation of CRITICS’ PICKS from our very own AWARD-WINNING staff and freelancers.

THAT’S RIGHT. What you’ve stumbled across here is the equivalent of the apocryphal LOST BOOK OF THE BIBLE! Without this soon-to-be sacred text in your possession, you would never know that:

Peter Noone of Herman’s Hermits FAME delivered the Best JOHNNY CASH imitation of the year at the Coastal Carolina Fair.

Local AUTHOR Charlie Geer brought the peninsula its Best Ironic Literary Moment when he signed copies of his book, Outbound: The Curious Secession of Latter-Day Charleston, for the very BLUEBLOODS he was making fun of!

TIMMY FINCH remains the BEST LOCAL COMIC and DAVID MANDEL and JOHNNY ALI HEYWARD (pictured to the left) are your favorite local actors.

NIRLEP restaurant won the race for total INDIAN FOOD DOMINATION in the Lowcountry.

Geekish GAMERS of all types get into their roles at North Chuck’s GREEN DRAGON as part of the Best Geek Fest.

OSCAR’S is the Best Summerville Restaurant, and POE’S rocks Sullivan’s Island with the BEST BURGER in Charleston.

Mustard Seed, Peninsula Grill, Al di La, and A.C.’s Bar and Grill are JUGGERNAUTS of excellence, scoring scads of BEST OF awards from both our readers and our critics. And, finally, you should fear ALLIGATORZILLA, not BILLY DEE WILLIAMS, as Best Local Sea MONSTER.

THIS IS YOUR CHANCE, dear readers: the Best Of Charleston 2006. Enjoy. Because next week, we once again lock our accountants into their SUBTERRANEAN lair and get started on next year!

Sitting down with sommeliers Femi Oyediran and Miles White, the emcee and DJ of approachable wine

I was seven, maybe eight, the first time I dabbled in wine. I was at Faith Temple Baptist Church and I remember anxiously scooting down the mile-long pew, racing down the aisle to the altar to get my thimble of wine to wash down those horrible sacramental wafers the pastor gave out.

Broken Home: The Save Veronica story

A guide to three of Charleston’s haunted places

Before You Go: Nurdle lawsuit continues; US his 200,000 COVID deaths

Starting on Sept. 21, the Junior League of Charleston (JLC) hosts their second virtual diaper drive of the year, this time in conjunction with National Diaper Need Awareness Week. The drive runs through Sept. 27.

Columbia’s Babcock Building, which sustained significant damage from a fire on Sept. 12, will be usable in future projects. The former Department of Mental Health building was originally going to be turned into apartments. Source: P&C Isle of Palms City Council will vote today on eliminating 100-150 parking spots on the land side of Palm […]

Cody Newman goes on the run in new single

Before You Go: Nurdle lawsuit continues; US his 200,000 COVID deaths

Cody Newman goes on the run in new single