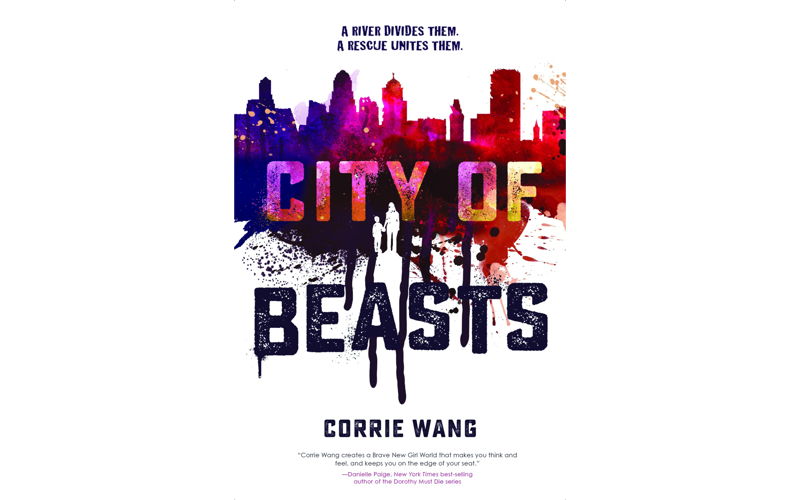 Corrie Wang’s City of Beasts has been awaiting its moment for 10 years. The novel, released on Sept. 17, envisions a post-apocalyptic world where men (beasts) and women (fees) live as fiercely divided enemies, and at the time the book was first drafted, dystopian YA was saturating the genre. “The original idea came right after The Hunger Games came out,” says Wang. “It came close to being published, but dystopian was everywhere so it was trunked.”

She set the draft aside, and in 2017, she published her first work, The Takedown. “After that was published, I met with my agent and presented all these current works in progress that I had,” recalls Wang. “She saw this one about men and women divided, and she was like, ‘This is exactly the right book for now.’ So I went back and realized it was no longer in my voice and did some massive rewrites. It was tricky, but here we are.”

City of Beasts is set in Buffalo, N.Y. in the not-so-distant future. Nearly two decades before the story begins, climate change brought Earth’s populations to a breaking point. Tensions rose with the sea levels and sparked World War III and nuclear disaster. With most survivors rendered sterile from radiation exposure, gender inequality took a violent turn. Women fled to Grand Island — a refuge separated by water from the grim urban remains of Buffalo and the beasts who had commandeered the city.

The novel’s heroine, Glori, grew up after the separation. She and other young fees have only a stereotypical understanding of males as aggressive, domineering, and lecherous creatures. It doesn’t help that the beasts occasionally attempt to infiltrate Grand Island. Like other fees, Glori has been thoroughly trained in the sciences and martial arts. For the beasts, the fees base their survival on a single principle: “If you see a beast and you have the shot, don’t hesitate. Kill it.”

But Glori and her family have a secret: they are hiding a child beast. Born in secret to Glori’s mother who was one of the last remaining fertile fees, the child shows nothing of the beastly behavior Glori’s heard of, and she and her closest confidants love him deeply.

But when the beasts discover the child’s existence, they steal him from Grand Island and kill a few fees in the process. Glori and her best friend, Su, decide immediately to venture into the city to rescue him — no holds barred. Throughout her journey, Glori encounters beasts who are every bit as violent and vulgar as her nightmares imagined, but she also meets beasts who are complex, surprising, and equally as misguided by stereotypes about fees. Some, including a hilariously animated and unexpectedly handsome beast named Sway, are even willing to lend her a hand. From one surprising twist to another, the book challenges nearly every truth that Glori has ever known, including a few about her own people.

Though it’s comfortable to drop this novel into the “dystopian” category, Wang prefers to think of it as “speculative fiction.” Sure, it’s set in a world wrought with subjugation, but it also tackles several other social and political issues from DNA modification to climate change. It reads like an ominous warning of an imminent future, but Wang says she’s really just working through her fears and trying to keep her readers informed.

“I write for my own sanity to try to figure out what’s happening. I don’t want to be that generation that thinks everything’s getting worse. If people become more aware of what’s happening around them, there’s still hope,” she says. And while most of the concerns are speculative imaginings, Wang says environmental references carry very real urgency. “Yeah, in terms of climate change, we should be pretty freaked out. We need to be talking and finding solutions.”

On the lighter side, the novel is filled with quirky characters, astonishing twists, and badass fight scenes. Wang has also scattered personal references throughout that compel readers to connect the dots from fiction to reality. Wang was born on Grand Island. She gives several nods to East Asian culture — a reflection of her family and her culinary pursuits with her husband, Shuai. She even throws in some Charlestonian characters who can be appeased by fresh produce.

That’s part of the fun of writing and reading YA, no matter your age, says Wang. It’s a liberating genre where you can get lost and simply have fun. She hopes her readers find this in City of Beasts.

“The stories are fast paced, the characters have all these quips,” says Wang. “It takes you back to what reading felt like when you were a kid, and you’d fly through these books and go into these outlandish, creative worlds. It’s just what reading is meant to be — this great release.”