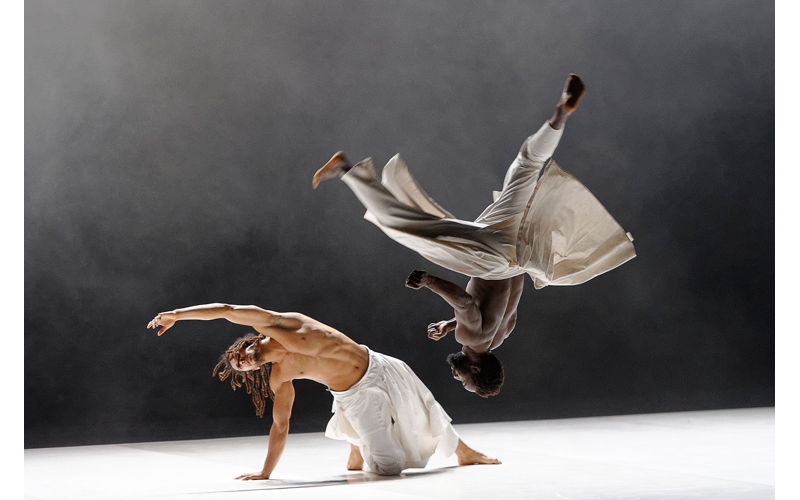 If your night on Saturday included watching Compagnie Hervé Koubi, then What the Day Owes to the Night would be a big thank you. The Gaillard was packed for the Spoleto Festival USA opening weekend dance performance, and the crowd was not disappointed. The all-male company offered sublimely athletic execution of Koubi’s hypnotic choreography, swirls of white cotton whirling around bare-chested bodies—whirlwinds of gorgeousness. “I think that was the best dance program I’ve ever seen at Spoleto,” said Mary Edna Fraser, local artist, dance fan, and long-time Festival patron who happened to be sitting on my row.

The evening opened with a bow-tied Koubi popping out between the curtains to offer an autobiographical prologue. “These are my found brothers,” the Cannes-based choreographer explained in his charming French accent, describing how he auditioned and cast his troupe in Algeria after discovering, in his late 20s, that his family was from there, and that his great-grandparents spoke only Arabic, not French. “This I did not know. It came as quite a shock,” he said.

That shock jolted Koubi, whose father is Muslim and mother Jewish, to dive deep into his origins and explore fertile North African grounds for reimagining dance. The result is multicultural enchantment, and a beautiful testimony to the power of embracing differences rather than locking down borders.

The program begins with the men laying in a chaotic lump on a dark stage, and as a soft light begins to rise, so too the dancers stretch and rise, extending their long, muscled arms and sculpted torsos, like DNA strands beginning to untangle and organize. From there a continuous hour-and-fifteen minute program unfolds, to music that carries it along it an equally riveting, genre-blending sinuousness—a mix of Middle Eastern traditional music, Sufi music, Bach, some operatic chorus, and Kronos Quartet dissonance.

Instead of extended pirouettes, Koubi’s dancers twirl endlessly on their head and on their hands in hip-hop and breakdancing-inspired whirls. They are inverted dervishes, turning stereotypes on their head. The visual effect is the same as in classical ballet, but the fresh spin is dizzyingly powerful. These are the wow moments, as is the rhythmic tribal dance vernacular toward the end. As spellbinding as much of the program was, I found myself wishing Koubi had explored his choreographic range with the same energy that he explored his personal roots. There was some monotony and, with no intermission, attention spans may well have wandered. And for god’s sake, Sploleto-goers, turn off your cell phones! Twice, during quiet pivotal moments, a ringtone rudely interrupted.

On the whole, Compagnie Hervé Koubi is well worth your time, money and attention. Gorgeous bodies performing stunning movement and dance to beautiful music – what’s not to love?